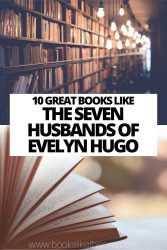 Books like The Seven Husbands of Evelyn Hugo will capture your interest and your hearts so I have compiled a list of ten similar novels for you to try if you are craving more!

Love can be found in the most unexpected of places or it could be sat right in front of you. In The Seven Husbands of Evelyn Hugo by Taylor Jenkins Reid, we meet Monique Grant, a small magazine reporter who receives a request to write Evelyn Hugo’s – an old Hollywood icon – biography.

Evelyn kept a lot of secrets about her reclusive and scandalous life and she is finally ready to reveal them. Monique knows this could kickstart her career and is determined to make this piece her best work yet. She listens as Evelyn describes her life, career, her seven marriages to seven men and more.

However, as Evelyn’s story unravels, she begins to realize that their lives are intertwined in ways she never expected.

The Invisible Life of Addie LaRue, by V.E. Schwab

If you’re looking for another historical and current day-based novel, then The Invisible Life of Addie LaRue is the book for you.

Addie LaRue is a young woman in France in 1714 who makes a Faustian pact to live forever however, she is cursed to be forgotten by everyone she meets. We follow Addie through a span of three hundred years, through history and time, as she is determined to leave her own mark on the world.

Fast forward to the 21st Century, Addie meets a man in a bookstore who remembers her name and suddenly, not all hope is lost. This is a perfect find for those looking for a book similar to The Seven Husbands of Evelyn Hugo.

Have you already read this novel? Check out our list of books like The Invisible Life of Addie LaRue!

Similar to The Seven Husbands of Evelyn Hugo, Where the Crawdads Sing follows a young girl in the 1960s.

In this coming-of-age story, we meet Kya Clark, a girl who is wild and barefoot and utterly unfit for the polite society of fishing village, Barkley Cove. She learns from nature and fireflies, rather than her one-day long education at a school.

Then, in 1969, the popular Chase Andrews is found dead and Kya is the local’s favourite suspect. Kya, who has lived most of her life in solitude, has come to the age where she yearns for love and attention.

She captures the eye of two young men from the village and she begins to allow herself to open up until something happens that changes everything.

Like Monique in The Seven Husbands of Evelyn Hugo, Verity follows Lowen Ashleigh who is given the opportunity of a lifetime when she is hired to finish bestselling author, Verity Crawford’s, books after she was injured and unable to complete them.

Verity’s husband, Jeremy, welcomes Lowen to the Crawford house and she is ready to read through pages and pages of notes but instead finds an unfinished autobiography that reveals what really happened the day Verity and Jeremy’s daughter died.

Keeping the manuscript hidden from the grieving Jeremy, whom Lowen is growing feelings for, she knows he would never see his wife the same if he reads the words Verity wrote.

This is a great thriller book like The Seven Husbands of Evelyn Hugo that would satisfy your book cravings.

They Both Die at the End is set in a world where a company named Death-Cast notifies people on the day of their death it will be their last.

On the 5th of September, just after midnight, Mateo Torrez and Rufus Emeterio get this notification and meet on an app that allows you to spend your last hours with another. The two go on one last adventure, grow feelings and hope that their lives held meaning.

Despite its dark and grim setting, Silvera tells a story similar to The Seven Husbands of Evelyn Hugo in which two people change each other’s lives in the course of a day.

Have you already read this novel? Check out our list of books like They Both Die at the End!

The Last Thing He Told Me, by Laura Dave

Two people come together despite unforeseen circumstances in this book similar to The Seven Husbands of Evelyn Hugo.

In The Last Thing He Told Me, Hannah’s husband of a year disappears without a trace leaving only a note behind saying: ‘protect her’. She knows the note refers to her new stepdaughter, Bailey, who wants nothing to do with her.

Owen’s disappearance escalates as the FBI gets involved, his boss is arrested and more. Hannah knows her husband isn’t who he said he was and Bailey is the key to finding out the truth.

The pair go on a quest to find out Owen’s true identity and begin building a future together at the same time.

Have you already read this novel? Check out our list of books like The Last Thing He Told Me!

If you enjoyed reading about a writer and love a good romance, then Beach Read should be next on your to be read list!

Two authors realize they are renting out neighbouring beach houses for three months after both of them have a bought of writer’s block. Despite this, the two are polar opposites.

Augustus writes literary fiction whilst January writes bestselling romcoms. The two make a pact to write a book in each other’s go-to genre in hopes of sparking inspiration.

Spending three months together, researching their books and writing, the pair develop the kind of feelings January only writes about.

For a book similar to The Seven Husbands of Evelyn Hugo that involves love in the most unexpected of circumstances, pick up Beach Read!

In Love and Other Words, we meet Macy and Elliot whose stories are told by alternating timelines from the teens to the present where they are reunited.

Once friends who turned into young lovers, they were the first and only loves of their lives until Elliot breaks her heart on the day that he opened his up. In the present, now the two have reunited, they’ll have to face the past and question whether this all-consuming love is worth the pain and happiness.

If you like reading books like The Seven Husbands of Evelyn Hugo with two timelines then this should be your next read.

For a book like The Seven Husbands of Evelyn Hugo that explores female sexuality and human connection and desire, you should think about adding City of Girls to your to be read list!

We meet ninety-five-year-old Vivian Morris recalling her life in the 1940s and how her choices changed the course of her life. Kicked out of college at nineteen, she is sent by her parents to her aunt’s crumbling playhouse in New York.

Vivian makes a mistake leading to a public scandal; however, this scandal takes her on a journey that leads her to the love of her life.

We watch Vivian as she finds herself and gives herself the freedom that allows her to be that person.

Whether you are reminiscing or wistful of times you never experienced, Mary Jane: A Novel is another coming-of-age book set in the 1970s.

Fourteen-year-old Mary Jane lives in Baltimore and is quiet and studious, with a love of books. She is over the moon when she lands a summer job nannying for the local and respectable doctor.

However, when Mary Jane arrives, the house is a mess and so are its occupants.

The doctor is a psychiatrist who has booked up the entire summer to help a rock star and his film star wife sober up. Mary Jane’s world of timeliness and tidiness meets the chaos of the home’s occupants and she realizes the world has a lot more to offer than she ever knew.

For another book where we see a young woman meet people living extraordinary lives, Mary Jane is the perfect book like The Seven Husbands of Evelyn Hugo.

Daisy Jones and The Six, by Taylor Jenkins Reid

An obvious suggestion if you’re looking for books like The Seven Husbands of Evelyn Hugo is one of Taylor Jenkins Reid’s other novels.

If you loved the historical aspect of The Seven Husbands of Evelyn Hugo then Daisy Jones and the Six is right up your street as it focuses on an iconic 1970s rock band and their stunning lead singer leading up to the group’s infamous break-up.

It concentrates on Daisy Jones, a girl who is desperate to get her voice noticed and finds herself submerged into the sex, drugs and rock’n’roll lifestyle. An up-and-coming band, named The Six, are led by Billie Dunne who finds out his girlfriend is pregnant the night before their tour is about to begin.

Billie finds the pressure is too much for him and goes wild on tour. The two acts are put together by a producer who has a vision like no other.

Already read this book? Check out our list of more books like Daisy Jones and the Six!

If you’ve already read The Seven Husbands of Evelyn Hugo and love books that focus on life and its complexities then look no further than this list!

Are you searching for more books similar to The Seven Husbands of Evelyn Hugo? Have any recommendations that didn’t make the list? Let us know in the comments! 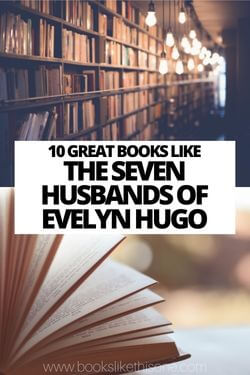