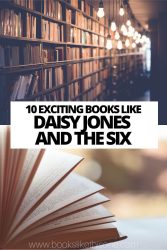 Are you looking for more books like Daisy Jones and the Six?

In Daisy Jones and the Six, we meet an iconic 1970s rock band and their stunning lead singer, Daisy Jones. Following the individuals of the band meeting for the first time and then leading up to the group’s infamous break up, we see the ups and downs of the rock’n’roll lifestyle.

Concentrating on Daisy Jones, a girl who is desperate to get her voice noticed and finds herself submerged into the sex, drugs and chaotic lifestyle. Billie Dunne is the lead singer of an up-and-coming band, named The Six. The night before their wild tour is about to begin, Billie finds out his girlfriend is pregnant.

Finding the pressure is too much for him, Billie goes wild on tour. Daisy and Billie meet after the two acts are put together by a producer who has a vision like no other. Thus, Daisy Jones and the Six are born.

Books like Daisy Jones and the Six will capture your interest and your hearts so I have made a list of ten similar novels for you to try if you are wanting more!

If you like reading books like Daisy Jones and the Six with a good romance then Ugly Love should be your next read.

In this book, we follow Tate Collins and Miles Archer. A pair who have an undeniable mutual attraction yet would not even consider each other friends. When their desires are acknowledged by the other, an arrangement is formed. Neither want nor have time for love; so that leaves sex.

Miles tells Tate straight away not to expect a future from him nor to talk about his past. It seems easy at first until all at once, the situation takes an ugly turn. Full of emotional conflict, this is a great, entertaining yet thought-provoking read!

An enemies-to-lovers story written by a book lover for book lovers, this new release from Emily Henry will have you beaming as you turn the pages.

In Books Lovers, Nora Stephens is a cutthroat literary agent who dreams of being the heroine of her own story. That is why she agrees to go on a trip to Sunshine Falls in North Carolina with her younger sister, Libby.

When she arrives, instead of a brooding man worthy of a love story, she bumps into Charlie Lastra. An editor from the city, Charlie has never gotten along with Nora but the universe keeps throwing the pair together.

Maybe something more waits for them on the horizon. If you love books similar to Daisy Jones and the Six, then add this to your list!

Marianne and Connell are complete opposites. Connell is the star of the football team and Marianna is quiet and private. The two hardly know each other until one day, Connell picks his mum up from her housekeeping job at Marianne’s house. A bond forms between them that they are determined to keep hidden.

A year later, studying at the same college, the two float between their own social groups and each other. As the pair grow from teenagers into young adults, they must face how far they are willing to go for one another.

A stunning read full of authentic emotions, Normal People is perfect for people looking for books like Daisy Jones and the Six.

The Last Thing He Told Me, by Laura Dave

In this book like Daisy Jones and the Six, we see two people come together despite unforeseen circumstances. Hannah’s husband of a year disappears, leaving only a note behind stating: ‘protect her’. The note clearly refers to her stepdaughter, Bailey, who resents Hannah and wants nothing to do with her.

The situation begins to escalate as the FBI get involved, Owen’s boss is arrested and more things go awry. Owen is definitely not who he said he was and Hannah is convinced Bailey is the key to finding out the truth.

Together, Bailey and Hannah set out on a journey to discover Owen’s true identity and along the way, begin to build a future together. The Last Thing He Told Me is thrilling and heartwarming story is a perfect addition for your bookshelf.

Have you already read this novel? Check out our list of books like The Last Thing He Told Me!

The Great Alone, by Kristin Hannah

Whether you are reminiscing or wistful of times you never experienced, The Great Alone is a historical fiction book set in the 1970s.

Ernt Allbright comes home from the Vietnam war in 1974 a changed man. Tortured by memories of the war, when Ernt loses another job, he makes an impulsive decision and moves his family to Alaska.

His plan is to live off the grid and it starts as the perfect solution. However, as winter approaches, Ernt’s mental state becomes unstable and fragile, leaving behind a fractured family.

For a book like Daisy Jones and the Six that explores family, human connection and the effects of war, you should think about adding The Great Alone to your to be read list!

Celestial and Roy are newlyweds and are the epitome of the American Dream and New South. Celestial is an up-and-coming artist on the brink of success whilst Roy is an executive much younger than the rest.

Before the couple can settle into married life, Roy is imprisoned for twelve years for a crime Celestial knows he did not commit. During this time, Celestial begins to depend on Andre, her childhood friend and best man, and as time passes her love for Roy fades.

After five years, Roy’s sentence is cut short and he is ready to start the life with Celestial that was delayed.

A story of love, friendship and heartbreak, An American Marriage is the perfect poignant book similar to Daisy Jones and the Six.

A renowned book and television show, The Handmaid’s Tale is a good alternative for those looking for darker, more dystopian books similar to Daisy Jones and the Six.

Offred is not allowed to read or leave the house unless it’s to get groceries and once a month she lies on a bed hoping her Commander will get her pregnant. In a time of decreasing fertility, women like Offred are used as ‘surrogates’ for Commander’s wives who cannot have their own child.

Offred remembers her life before with her husband and daughter where she had rights and money but that life is gone.

If you like easy to read and uplifting books like Daisy Jones and the Six then Eleanor Oliphant is Completely Fine is a great alternative.

Eleanor Oliphant tends to lack the necessary social skills she needs to form human connections and usually says exactly what she is thinking.

Her carefully planned out life is adequate to say the least – not bad but not good. Then Eleanor meets Raymond, the unhygienic IT man at work, and everything changes for her.

The pair help save an elderly man from a fall and Eleanor finds herself escaping the life of isolation she inadvertently created for herself. She soon finds that maybe she can fall in love after all.

Have you already read this novel? Check out our list of books like Eleanor Oliphant is Completely Fine!

The People We Keep, by Allison Larkin

If Daisy Jones and the Six has one trope then it is found family and if that is up your street, then pick up The People We Keep by Allison Larkin.

April Sawicki is living with her father in a motorhome, failing her exams and working a diner job. After taking her neighbour’s car to an open mic night, she realises the world has so much more to offer than her tiny home town.

Books like Daisy Jones and the Six have beautiful, lyrical writing and fascinating characters to read about. If you want more like that then grab this book!

In The Seven Husbands of Evelyn Hugo, the reader meets Monique Grant, a magazine reporter trying to make a name for herself, who receives a request to write Evelyn Hugo’s – an old Hollywood icon – biography.

Having kept a lot of secrets about her reclusive and scandalous life, Evelyn Hugo is finally ready to reveal them – and to Monique of all people. Monique knows this could kickstart her career and she is determined to make this opportunity her best writing yet.

She listens as Evelyn describes her life, career, her seven marriages to seven men and more crazy tales. However, as Evelyn’s story unravels, Monique begins to realize that their lives are connected in ways she had never expected.

If you loved Taylor Jenkins Reid’s work in Daisy Jones and the Six, then you will love her writing in this novel.

If you have already read Daisy Jones and the Six then look no further than this list that I have compiled full of similar books for you to enjoy! Each of these books has a different take on the genre and has something fresh for those looking for something new to read.

Are you looking for more books similar to Daisy Jones and the Six? Have any recommendations that didn’t make the list? Let us know in the comments! 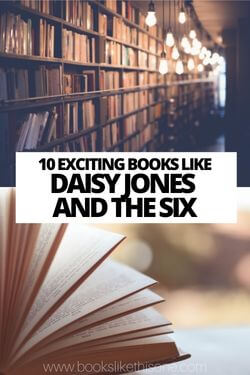