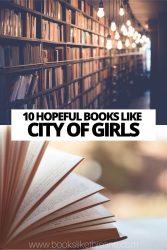 Time travel is possible when reading books like City of Girls. These books have the power to transport you to significant times in history and with each word you can immerse yourself in the characters’ lives.

City of Girls is the retelling of Vivian’s story, starting in the 1940s when she is kicked out of school and her parents send her to live with her aunt. But little do they know that what they thought was punishment, actually turns out to be the best thing to happen to Vivian.

Continue reading for more beautiful and hopeful books like this one.

While we get to see life during World War II through the American side in City of Girls, in The Paris Library we get to experience life in France, specifically in Paris, during the same devastating time.

The main character in this book is Odile and the reader gets to see her as a young woman working at her dream job as a librarian, then her trying to help people during the war, as well as her life when she’s older.

The book slowly reveals how Odile left Paris and ended up in Montana in the US, as we get to also learn how Odile impacts her young neighbour, Lily while teaching her French and sharing her own story.

The beautiful story of the courageous librarians gives us a different side of the war and shows us how important books, family and friends can be, especially during hardships.

Growing up with an absent famous singer father, whose absence left their mother to turn to alcohol, the four Riva siblings had to grow up faster than most kids.

The eldest, Nina, became a second mom to her siblings and later fell into modelling to help pay their debts. The second, Jay, became a professional surfer. The third, Hud, followed his brother to the surfing world and became a photographer. The fourth, Kit, dreamed of surfing professionally as well but was trying to figure out how to be taken seriously.

During Nina’s annual summer party, that promised appearances of many famous people in Hollywood, with so much alcohol and secrets going around, something is bound to explore… or catch on fire.

As we near the fire, flashbacks of the siblings will give us a better understanding of what led them to where they are in the present. But once it’s all out in the open, will the four be able to come back to each other again in Malibu Rising?

In hopes of saving his family, under false pretence Lale volunteers to work for the Germans in April 1942 and is sent to Auschwitz-Birkenau, not imagining he would soon become a prisoner for three years.

After witnessing the cruelties in the camps, Lale promises himself that he will stay alive however he can, to one day be free of the Nazis. By some luck and thanks to the multiple languages he spoke, Lale becomes the Tätowierer or tattooist.

On the day he meets number 34902, who he later finds out is named Gita, he experiences a deep connection and discovers he’s found love. Now, he has a bigger reason to survive so he can marry her when they leave the hell they live in.

Similar to books like City of Girls, The Tattooist of Auschwitz provides a strong representation of hope and love through one of the darkest periods in history. The characters find a purpose to continue while helping others in whatever way they can.

Similar to books like City of Girls, The Seven Husbands of Evelyn Hugo is a historical fiction novel about one of Hollywood’s most beloved actresses who has always kept the public at arm’s length – until now.

Mystery, scandal, admiration, money and fame have followed Evelyn around throughout her career. Although there is so much more to this woman, most people just cared to ask about her husbands and failed marriages.

Nearing 80 years old, Evelyn finally decides to share her life story in an all-exclusive biography that she wants Monique, an unknown writer from Vivant, to write.

During their time spent together writing the book, Monique gets to see the real Evelyn very few people had gotten the chance to know and she can see some similarities between the two of them.

As Monique begins to admire and love Evelyn, she will learn the true reason for why she was chosen to write the biography and how she is connected to Evelyn. But will the truth shatter her image of the iconic Hollywood bombshell?

The Five: The Untold Lives of the Women Killed by Jack the Ripper, by Hallie Rubenhold

Most people have heard the horrible things Jack the Ripper did around 1888 in the East End of London, but few know the real story of his victims.

Similar to other books like City of Girls, The Five takes you back in time to Victorian London and walks you through the lives of the five women, Polly, Annie, Elizabeth, Catherine and Mary-Jane, who were killed by one of the most infamous killers.

However, many believe that all five women were prostitutes but in reality, only two were known to have been solicitors. Through this book, we get to know who these women were and the struggles they went through that led to their unfortunate deaths.

The Lies That Bind, by Emily Giffin

Imagine finding an unbelievably perfect man, having him suddenly disappear as quickly as he came and then discovering all his secrets but not being able to confront him because he’s presumed dead.

When Cecily meets Grant at a dive bar on a spring night in 2001, their connection is instant and she just knows he’s the right guy for her.

Even when he temporally moves overseas and with other obstacles in the way, their love continues strong and she counts down the days until he returns on September 10. When he arrives it’s like a dream and all the pieces are put back together.

Then on September 11, he disappears with the chaos and devastation brought on by the attacks on the US.

In the woke of the disaster, Cecily uses her investigative reporting skills to figure out what happened to Grant, which will lead her to dig up the full story and find The Lies That Bind.

The Testaments, by Margaret Atwood

As the second book to The Handmaid’s Tale, The Testaments shows how life continues in and outside of Gilead 15 years after Offred’s unknown ending from the first book.

This book gives us a different perspective on three women connected to Gilead who will play a role in trying to end the cruelties done to women in the former US.

Similar to books like City of Girls, we get to see the fight for women’s empowerment and equality in a place that wants to destroy women.

While the leaders of Gilead believe they’re winning, the women are silently building up their strength and shining their armour to take back what is theirs.

The Spring Girls, by Anna Todd

The Spring Girls is a modern retelling of the classic Little Women, which includes the lovely sisters Meg, Jo, Beth and Amy.

While the characters and their situations are similar to the original book, the girls are in the twenty-first century dealing with modern issues like social media and sexuality.

The strong feminist message of unity and lifting women up is also represented in books similar to City of Girls, as well as the celebration of people being themselves.

Mackenzie has tried her best to stick to the mould her parents have forced her in, while also staying true to herself when no one was looking.

At 20 years old, Mac has a successful business she created on her own in high school but her parents don’t take it seriously and want her to get a college degree so she can marry her long-time rich boyfriend to then run a charity or anything else to pass the time while her husband is working.

Mac and Vivian from City of Girls had a similar upbringing even though they were from different generations but that’s what happens with most old money families. No matter their circumstances, the two ladies find a way to rule their own lives.

In the process of taking the reins of her life, Mac meets a bad boy who will upturn her Good Girl Complex and further teach her how to live for happiness.

As a popular classic, The Great Gatsby is set in 1920s America and captures the essence of the Jazz Age.

While it is set a couple of decades before City of Girls, both books focus on the history and culture of the east coast which helps readers envision that time through the characters’ eyes.

The book centres around the forbidden and sometimes unrequited love story between Jay Gatsby and Daisy Buchanan, along with the tons of partying going on at that time. The story is told by Nick Carraway who was Daisy’s cousin and Gatsby’s neighbour but soon becomes an admiring friend.

Although you might want to believe that love can conquer all, Daisy is not only married but also has other priorities to consider. Is a happy ending possible?

Who needs a time machine when you can travel through generations by reading books similar to City of Girls? With each turn of the page from any of the books on this list, you can take a peek into a different time and place. Bon voyage and safe travels!

Are you looking for more books like City of Girls? Have any recommendations that didn’t make the list? Let us know in the comments! 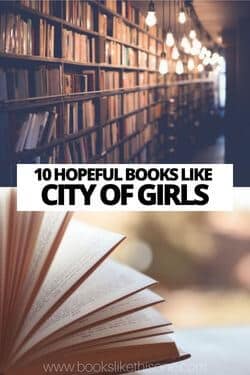