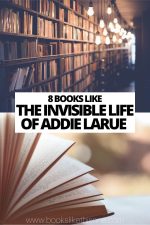 Are you on the hunt for your next transportive reading experience? Then look no further than this list of books like The Invisible Life of Addie LaRue. V. E. Schwab’s 2020 novel is a slight change from the fantastical trilogies and YA fiction that she has become renowned for, but a thrilling read it is none the less.

The Invisible Life of Addie LaRue centres around the titular Addie LaRue who, in a position of desperation makes a Faustian agreement to live forever but, like most deals with the Devil, there is a catch — though Addie may live forever, she will be forgotten by everyone who meets her.

Beginning in 1714 France, and living through 300 years worth of art, religion and monumental moments in history, Addie battles to leave some sort of mark on the world that she will forever occupy. Then one day her dream is realised when a young man approaches her who recognises her and knows her name…

Books like The Invisible Life of Addie LaRue are dazzling, they’re the reason I love to read and the books which follow are equally as imaginative providing an escape whether through time, their characters or through a sense of place, I hope you enjoy.

Before the Coffee Gets Cold, by Toshikazu Kawaguchi

Fancy your morning coffee with a side of time travel? In Toshikazu Kawaguchi’s novel Before the Coffee Gets Cold, we get just that.

For over one hundred years, a little back alley cafe in Tokyo has been brewing a special coffee which allows customers to travel back in time, under the proviso they sit in a specific seat, not leave the cafe while travelling in time and to return to the present before their coffee gets cold.

Through four visitors to the cafe we travel back with them for different reasons; to see someone for the last time, to resolve an argument, to meet someone again after they parted ways, to receive answers to questions that haunt their present.

Kawaguchi gives readers the chance to explore the question of what would you do, say and change if you had the chance to go back to specific moments again.

Heartbroken, moved, astounded, thoughtful – these are just some of feelings you will come away with after finishing our first book similar to The Invisible Life of Addie LaRue, Kawaguchi’s beautiful Before the Coffee Gets Cold.

The Versions of Us, by Laura Barnett

From questioning whether or not you would time travel to answering ‘what if?’ in our next book like The Invisible Life of Addie LaRue, it is Laura Barnett’s stunning debut The Versions of Us.

Three characters whose lives interweave, one decision with three possible outcomes all of which could lead to very different lives. Eva is already in a relationship with David when she first meets Jim. Both she and Jim are nineteen, students at Cambridge and both are travelling down the same country road in 1958 when Eva swerves her bike to avoid a dog.

Their future hinges on this first meeting and so the narrative unfurls the three possible courses their lives could have taken following that very first chance encounter.

Barnett exquisitely portrays the nature of love, how it changes over time through the many obstacles and challenges life throws at us which will surely have you questioning some of your decisions and the different roads they could have led you down.

If you are also a fan of films like Serendipity and Sliding Doors then The Versions of Us will be the perfect next read for you.

Novels like The Invisible Life of Addie LaRue also prompt us to think about existence and the world on a much larger scale, the good we could do if we possessed a specific gift such as time travel or invisibility for example.

In Kate Atkinson’s novel Life After Life, she explores just that with a character who seems to have an infinite amount of lives.

Ursula Todd lives time and again for as she grows up, she also dies only to be reborn, grow and die again. Her gift realised Ursula decides to use it to benefit humanity and save the world from the likes of Adolf Hitler’s reign and devastation during World War II.

In the first 100 pages of Life After Life, Ursula dies 5 times which is a bit confusing until you realise what is going on and why, after that, you will want to continue to live and die with Ursula for eternity.

How to Stop Time, by Matt Haig

As with a lot of books like The Invisible Life of Addie LaRue, it is their original plots that hook us in and our next novel How to Stop Time is no exception to this rule.

Tom Hazard is no ordinary History teacher. Though he may only look 41, he is actually centuries old and has lived through the many events his subject teaches (and he knows several historical and infamous people personally).

There are more like Tom in the world, protected by the Albatross Society who has one rule to ensure their safety and that their secret will never be revealed; never fall in love. A rule which suited Tom for many many years until he meets Camille, a beautiful French teacher at the school who seems just as captivated by him as he is her.

Matt Haig’s is a novel about love, about life, about happiness, about decisions, about change and, of course, about time, prepare to be fully immersed in How to Stop Time from start to finish.

The characters in our next novel don’t time travel per se, but as a reader prepare to go on a rip-roaring adventure through time with them when you pick up a copy of Cloud Atlas from your bookshelf!

We begin on a voyage in 1850 from the Chatham Isles to California, we then hop to 1931 and to Belgium, then onto 1970’s America, present-day England, a futuristic Korea to a post-apocalyptic world and back again.

Featuring an assortment of curious characters whose lives irrevocably interlock including a notary, a bisexual composer, a troubled reporter on the brink of uncovering a huge story among others, who all live worlds apart yet bare a very similar birthmark, one shaped like comet.

An exploration of fate, reincarnation, existence, predicate it is like 6 novels in one! To me David Mitchell cemented himself as the tour-de-force we recognise him as today thanks to this novel, if you love books like The Invisible Life of Addie LaRue for the adventure, the places they take your imagination and the imprint they leave behind then make sure you give Cloud Atlas a read too.

The First Fifteen Lives of Harry August, by Claire North

If you liked the mystery in The Invisible Life of Addie LaRue then you are sure to find this aspect appealing in our next novel like it, Claire North’s wonderful story of The First Fifteen Lives of Harry August.

We meet Harry August on his deathbed, for what will transpire as his eleventh time, not his eleventh time nearly dyeing, his eleventh death. It seems no matter what he does in each life, the changes he makes, the different choices he takes, once he dies he always returns to the same place, his childhood, to do it all again but with all the memories of his lives before.

Except this time, as he is nearing the end of this life, a young girl comes to his bedside with a very important message…

The First Fifteen Lives of Harry August is original, thoughtful and profound which is why we need to live fifteen lives with Harry as one just wouldn’t be enough!

The Midnight Library, by Matt Haig

Next on this list of books like The Invisible Life of Addie LaRue is the second appearance of a Matt Haig novel, this time his recently published The Midnight Library, which is a perfect read for anyone wishing to explore the nature of life and existence.

In this novel, purgatory is a type of library, one with infinite shelves full of books, books which detail your story but as another reality, the life you could have led had you made a different decision.

Nora Seed finds herself here in the Midnight Library forced with that very prospect, to explore the life she could have had; the alternate career paths, the relationships, the opportunities etc and if she had made certain decisions differently, would that life have been any more or less fulfilling than the life she actually led?

Big ideas are explored and portrayed in The Midnight Library with Haig’s eloquence and originality, a must-read book for a totally transportive reading experience.

The Seven Husbands of Evelyn Hugo draws inspiration from the lives of Elizabeth Taylor and Ava Gardner, it is a dazzlingly glamorous novel from Taylor Jenkins Read which was nominated for a host of awards upon publication in 2017.

Evelyn Hugo is an ageing Hollywood star who is recognised for her talent as much as her love life. She has now reached an age where she is ready to tell all and books a journalist to interview her for an exposé revealing all the juicy details of her scandalously glamorous life. She requests Monique Grant to do the job, but no one can understand why, least of all Monique.

Monique is stagnant as much in her life as she is in her career, but as the interview progresses and Evelyn recounts her life story, it becomes imminently clear that Monique was the only person who could have interviewed Evelyn about her life.

Another novel like The Invisible Life of Addie LaRue which makes us face our demons and consider all those important decisions in life – be prepared The Seven Husbands of Evelyn Hugo is sure to knock your socks off.

There are plenty of novels out there that deal with existential questions like the meaning of life and which explore fate and the decisions we make. As this list of books like The Invisible Life of Addie La Rue has demonstrated, though they may explore similar themes the way they do so is refreshing and riveting almost as if it has never been done before.

Are you looking for more books like The Invisible Life of Addie LaRue? Have any recommendations that didn’t make the list? Let us know in the comments! 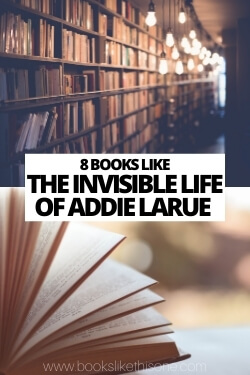