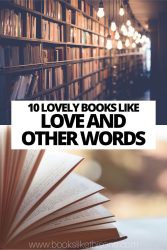 Books like Love and Other Words will pull at each of your heartstrings while you follow the characters’ journey from loss to healing.

This book goes back and forth to the past and present. We go back to Macy losing her mother, finding love in books, and falling for her best friend, Elliot. Then in the present, we witness Macy and Elliot reconnecting after not speaking for 11 years.

Love can get messy, especially at a young age. But when it’s real, isn’t it worth fighting for?

If you adore books like this one, then you will fall for the rest of these novels below.

Every Summer After, by Carley Fortune

For six years, Persephone and her parents escaped the city of Toronto to their lakeside cottage during summers and occasional holidays. Similarly to books like Love and Other Words, her parents wanted Percy to experience different surroundings and people than what she was used to growing up in the city.

During these trips at the cottage, Percy becomes great friends with the boys next door, forming a special bond with the boy her age, Sam.

In this time, she not only falls in love with Barry’s Bay but also with her best friend. And while they try to play it safe and not ruin their friendship, things are bound to get messy — and they do.

Their friendship falls apart because of a mistake, which leads to them going over a decade without speaking until Sam’s mother’s funeral finally brings them together.

While their connection is stronger than ever, is it enough to fix what they lost all those years ago and will they finally allow themselves to give into love in Every Summer After?

When Poppy and Alex first met at their college orientation, they don’t really get along. But when they carpool for the holidays to go back home, their friendship blossoms.

For years they take summer trips together to new places Poppy wants to explore because Alex is content with staying in his hometown, but he would do anything for his best friend.

On their eighth trip, everything falls apart, and the two go two years without speaking until Poppy finally reaches out with the suggestion of a summer trip.

Similar to books like Love and Other Words, the innocent opposite gender friendships often develop into more because sometimes it can be hard to not fall for someone you can be yourself and who loves you for it.

Now with the pressure of making this vacation the best one yet, Poppy will do her best to salvage their friendship. But what if Alex wants to be more than friends in People We Meet on Vacation?

Have you already read this novel? Check out our list of books like People We Meet on Vacation!

On November 9, Fallon was ready to leave Los Angeles and move across the country, when she meets someone who will change her for better or worse.

While she was trying to get through an awful lunch with her dad, Ben jumped in to save her. Afterwards, they spend the rest of the day together and realise how perfect they could be for each other, but with Fallon moving away and Ben going to school, they don’t want to hold one another back.

So the two make a deal to meet on the same day for the next five years. On November 9th they will focus on being together while the rest of the year will be left to Ben writing and Fallon working on her career.

Although the characters in Love and Other Words have inner scars, Fallon was left with physical scars from a fire. While Ben has made it his mission to erase her insecurities, soon Fallon will discover what his real intentions are.

When Elsie decides to pick up pizza and stay in on New Year’s, she didn’t anticipate how this decision would change her life forever.

At the restaurant, she meets Ben and after exchanging phone numbers, their relationship begins shining bright like a supernova. But like a supernova which fades out quickly, their story has a similar finale.

The two date for a few months, move in together, get engaged then get married after only six months. But then tragedy hits and after nine days of marriage, Ben gets hit while on a cereal run on his bike and dies.

Similar to books like Love and Other Words, Forever, Interrupted deals with loss and the reader gets to see the tough journey the characters have to go through.

Now Elsie has to figure out how to put herself back together as a young widow. After meeting her mother-in-law for the first time at the hospital, they might be able to help each other with healing.

When Tate and her father move into the house next to Jared’s after Tate’s mother’s passing, the two instantly become best friends. That is until they start high school and for some unknown reason, Jared wants nothing to do with Tate.

Like Elliot in Love and Other Words, Tate loses her best friend without knowing why and she just has to learn to live with the pranks and rumours Jared starts. When she can’t take it anymore, she escapes to France for an exchange year in her junior year.

After she returns home for her senior year, she decides she’s done with all the bullying and will start fighting back. But when Tate slowly becomes the Bully and begins to break Jared’s walls down, can they mend their friendship and potentially become more?

Eve, Susie, Justin and Ed have been best friends since college and even in their thirties, they are inseparable.

The four meet every Thursday for pub trivia night and have done so for years. While their friendships have stayed mostly platonic, Ed and Eve have clear chemistry and almost dated in college.

The line between friendship and romance in books like Love and Other Words is often an easy line to dance on but the decision to cross it can be difficult. In Just Last Night, after they kiss there is some miscommunication that causes Eve and Ed to decide not to cross the line again.

After a tragic accident, the group is put to the test as they grieve and secrets are exposed. When the truth all comes out, will the friendships be worth rebuilding or is it just best to cut some ties in Just Last Night?

Butterfly in Frost, by Sylvia Day

In hopes of a fresh start, Teagan moves to Washington to outrun her past in Butterfly in Frost.

For a while, it seems to be going as planned. She’s good friends with her neighbours, enjoys her job and has finished renovating her house. But then a new neighbour moves in next door, Garrett Frost, and he has the power to overturn her calm life.

Through the sorrow hidden under the surface in both of them, Teagan and Garrett start to create something beautiful. But getting vulnerable and opening up old wounds has the potential to destroy them or help them both move forward.

Josh and Hazel’s Guide to Not Dating, by Christina Lauren

Although Hazel is sweet and generous, she also has no filter. This makes the men she dates think of her as too much to deal with and she’s tired of people not taking her seriously.

When she runs into Josh, an old college friend who was recently cheated on, they decide to help find dates for one another. And so begins the many double dates where Josh and Hazel seem more interested in each other than their dates.

As the two continue dating but not really dating, will they finally break their own rules and give into their attraction or decide on staying strictly friends in Josh and Hazel’s Guide to Not Dating?

At the start of their long story switching back from friends to lovers and everything in between, Marianne was only the unusual daughter of Connell’s mother’s employer to him.

Over the years they try to be more but different things get in the way. In their time at Trinity College in Dublin, they stick to being only friends but even then they still share a bond that no one can get close to.

Like Normal People, books similar to Love and Other Words show the difficulties between best friends who are attracted to each other. Although they think and say they want one thing, sometimes their relationship can develop into more without them trying.

Even though they come and go into each others’ lives for periods of time, when they come together it’s like no time has passed.

But with both Marianne and Connell avoiding their issues while trying to save the other person, is their relationship worth the hurt or is it time to walk away for good?

Avery is used to being busy running her family’s hotel with her sisters and hosting events. She even enjoys it.

So when she has a bad car accident that leaves her immobile for months, she feels desperate not being able to move around, play soccer or even get intimate with herself. But she has a great support system, especially an excellent caretaker in her best friend/roommate/crush Declan.

Soon the two are so far away from the friend zone, that Declan offers to pleasure her in more ways than just back massages.

When Sparks Fly and they give into their attraction, can Avery and Declan make it work or destroy the beautiful friendship they worked years to build?

A common mistake characters in books similar to Love and Other Words make is to not talk through their pain and to not confront any mistakes they or others made. Even though they often go years without working through those issues, the likely “happily ever afters” are well worth the wait.

Are you looking for more books like Love and Other Words? Have any recommendations that didn’t make the list? Let us know in the comments! 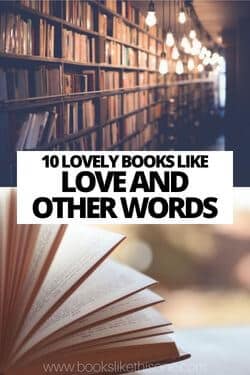