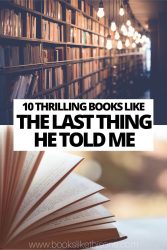 Are you looking for books like The Last Thing He Told Me?

We all love a good mystery or thriller that puts us on the edge of our seats, turning page by page, desperate for the next plot twist to be revealed. The New York Times bestseller, The Last Thing He Told Me by Laura Dave is one of the best out there.

In a series of unforeseen circumstances, Hannah’s husband of a year goes missing, leaving her only a note with only two words scribbled on it: Protect her. The note, referring to her stepdaughter Bailey, is strange and Hannah is convinced Bailey is the key to everything.

Suddenly, the FBI are involved, Owen’s boss is taken in by the police and is becoming clearer that Owen wasn’t all that he said he was. Both Hannah and Bailey join forces in an attempt to discover Owen’s true identity and somewhere along the way, they build a relationship and life together.

If you’ve already read this book, you’ll be looking for something similar to The Last Thing He Told Me. Look no further than the list I put together below!

For those looking for a great young adult mystery book similar to The Last Thing He Told Me, look no further than Truly Devious.

Set in a school for extremely gifted children named Ellingham Academy, Stevie is the newest student with her true-crime obsession becoming the centre of her education. In the 1930s, Ellingham Academy was the setting for a famous unsolved kidnapping and murder of the school’s founder’s family.

This makes the school the perfect place for Stevie to study, determined to discover the truth decades later. However, a murder mystery in the present day means Stevie needs to be extra careful, distrustful of everyone around her.

With two mysteries to solve, Stevie is elbow-deep in the mystery surrounding Ellingham Academy.

The Secret History, by Donna Tartt

Praised for its complex character and plot as well as its beautifully haunting writing style, Donna Tartt’s The Secret History won the Pulitzer Prize for Fiction.

Following a group of classics students at an elite university in 1980s Vermont, the book is narrated by one of the students, Richard Papen.

The group are taught by the eccentric Professor Julian Morrow who teaches them Ancient Greek. Richard is a newcomer to the group of students who are all odd in their own ways but soon finds himself enjoying their company, even if by impulse.

Soon, their friend Bunny dies, wreaking havoc amongst the friends. Their lives begin to fall apart and the mystery behind Bunny’s death is slowly unveiled.

This book focuses on the corruption and morality of humanity and provides a fantastic mystery for those looking for a book like The Last Thing He Told Me.

The Wicker King, by K. Ancrum

A beautiful portrayal of friendship and mental health, The Wicker King focuses on August and Jack.

Jack begins to show signs of a degenerative hallucinatory disorder and August is determined to help Jack in any way he can. However, Jack’s hallucinations become more vivid and realistic and take form in a fantasy world ruled ‘the wicker king’.

Jack is convinced he must lead a quest to complete a prophecy to save this world and, in his attempt to help, even August begins to question what is real or not. The pair are on the brink of destruction with only each other to keep one another somewhat sane, but ultimately, they alone have the choice on what is fact and fiction.

This fantastical journey provides the same gripping feeling that books like The Last Thing He Told Me make you feel.

This book like The Last Thing He Told Me, focuses on the character’s emotional conflict and journey. In We Were Liars, we follow the narrator, Cadence, who has lost her memory after a tragic accident at her family’s private island.

Cadence remembers spending the summer with her cousins, the rift between the family about who will inherit the estate and suggesting that they should burn the estate to get rid of the root of the problem. Then… nothing.

Unable to contact her cousins, Cadence finally visits the island two years after the accident and her memories slowly come back to her and the truth is revealed.

This book has the same dangerous and thrilling environment that books similar to The Last Thing He Told Me provides the reader with. If you want to be gripping your next book’s pages, pick up the first book in the All for the Game series, The Foxhole Court.

Neil Josten is the newest member of the Palmetto State Uni Exy team however, he is also the runaway son of crime lord, The Butcher.

Afraid for his life, Neil never stays in the same place for long and changes his identity often but with the Palmetto State team, he finds a family.

But with the team being so famous, his face is broadcasted all over the country and soon, his lies will fall apart around him and maybe, get him killed. However, one of Neil’s new teammates is from his past and he finds that he can’t run from him another time.

A Study in Charlotte, by Brittany Cavallaro

In A Study in Charlotte, a retelling of Sherlock Holmes, the novel focuses on Holmes’ and Watson’s ancestors, Charlotte and Jamie. The pair have never met despite the forefathers being so close until Jamie enrolls at Sherringford school where Charlotte also happens to study at.

Charlotte Holmes is known for her genius and quick temper, much like Sherlock Holmes himself but Jamie can’t help but find himself being drawn to her again and again.

So, when a student at Sherringford dies under suspicious circumstances, the two are framed for murder and have to prove their innocence to the school and the entire world.

In this mystery thriller book like The Last Thing He Told Me, we explore powerful and passionate friendships whilst navigating a dark world of murder and crime.

Aza Holmes is a young girl struggling to navigate her life who finds herself intrigued by the case of a fugitive billionaire and the cash reward that comes with information of his whereabouts.

Struggling with her own OCD and anxiety, she attempts to discover where the billionaire may be, the mystery distracting her from her own thoughts and pain.

This book explores friendship, mental health and provides a brilliant mystery for those who love a thriller! Pick up Turtles All the Way Down for your next book like The Last Thing He Told Me.

If We Were Villains, by M.L. Rio

For those of you looking for a book similar to The Last Thing He Told Me, look no further than If We Were Villains.

The book follows Oliver Marks who reflects upon his time at university studying Shakespeare where a brutal murder occurred in his friendship group of seven.

Oliver spent ten years for a crime no one is truly certain he committed. Now, Detective Colborne visits the free man to discover what happened all those years ago before he retires for good. With its dark and mysterious themes, add this book to your to-be-read list!

Six Weeks to Live is a thrilling mystery book like The Last Thing He Told Me about Jennifer Barnes who is told she has six weeks to live after being diagnosed with a terminal brain tumour: cancer.

Deciding to spend what time she has left with her family; Jennifer soon realizes that someone poisoned her a year ago.

Determined to find out who wants her gone for good, she has six weeks to find out who attempted to kill her. Convinced it is her soon-to-be ex-husband, Jennifer’s daughters are dealing with the news in their own way and don’t know what to think about their mother’s crusade against their father.

Soon, Jennifer is unsure she is looking in the right place and time is running out for her.

The Girl on the Train, by Paula Hawkins

In The Girl on the Train, Rachel gets the same train every day, sees the same people, the same houses and the same couple in the nice houses’ back garden. ‘Jess and Jason’ is Rachel’s name for the couple.

They live a perfect life, in her mind, and always dreams of a life like that: happy. Until one day, she sees something crazy. With only a minute on the platform, the sixty-second pause is enough for everything in Rachel’s life to change.

Determined to help in her own, strange way, Rachel soon becomes a huge part of Jess and Jason’s lives, despite whether they want her there or not.

Have you already read this novel? Check out our list of books like The Girl on the Train!

I hope this list provides you with a book like The Last Thing He Told Me that you will enjoy! All the books above have an element of mystery, thriller or danger to satisfy your need for an interesting read.

Are you looking for more books like The Last Thing He Told Me? Have any recommendations that didn’t make the list? Let us know in the comments! 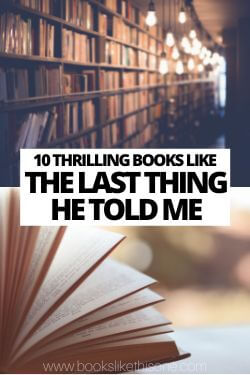