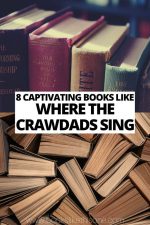 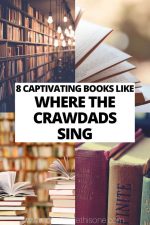 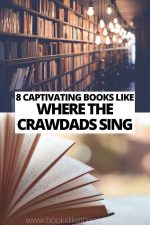 Delia Owens fiction debut has taken the world by storm, topping the New York Times fiction bestseller list for 27 non-consecutive weeks and been optioned by Reese Witherspoon’s famed book club ‘Hello Sunshine.’ This coming-of-age murder mystery is now an international bestseller, so there’s no wonder that people are on the hunt for more books like Where the Crawdads Sing.

Outcast from the quiet town of Barkley Cove and abandoned by everyone she has ever loved, Kya Clark learnt everything about life from the marshlands and the animals which inhabit it with her. The story unfolds across two timelines which slowly intertwine involving Kya and the mysterious death of local celebrity Chase Andrews.

Steeped in wildlife with the haunting backdrop of the marshes on the North Carolina coastline, Where the Crawdads Sing is a painfully beautiful tale of love, loss, hope and survival which will lead you on a thrilling journey to discover the unexpected truth.

This list of books hosts a mixture of beautiful settings, mysteries that need solving and strong female leads who overcome prejudice and peril to succeed.

My Absolute Darling, by Gabriel Tallent

Praised for his portrayal of a particularly difficult relationship, Gabriel Tallent’s 2017 fiction debut My Absolute Darling is challenging to read in places but totally worth the acclaim he has earned.

Set along the coast of California we meet Julie “Turtle” Alveston, the protagonist who is better at using guns and shooting than she is at school. She lives with her father, an abusive sociopathic man who taught her everything about hunting and shooting.

My Absolute Darling is an affecting read, as the plot progresses the reader witnesses the extent of Turtle’s abuse at the hands of her father but also her Stockholm syndrome as she both fears and loves him. But, when he brings home another young girl, Turtle knows what she has to do to end the cycle of abuse for good.

Turtle’s quest for survival and strength is empowering and echos Kya’s resilience to overcome the odds stacked against her therefore if you are looking for a book similar to Where the Crawdads Sing because of this then My Absolute Darling will have you on the edge of your seat.

Bryn Chancellor’s Sycamore is a psychological, coming of age story steeped in whispers and mystery. With Arizona as the scorching backdrop, things start heating up when a newcomer arrives in the town of Sycamore and stumbles upon bones and human remains whilst on a hike.

The town’s inhabitants fear it is the bones of Jess Winters, a local girl who mysteriously disappeared 18 years earlier and was never found. The novel looks at a town’s perspective on the loss affecting the entire community, with those particularly haunted by Jess’s absence sharing flashbacks which slowly reveal what happened to her.

This is a multi-voiced, evocative and atmospheric story of desire, loneliness, grief, love, hope and the forces which drive human nature, masterfully put together by Chancellor.

If you like Where The Crawdads Sing because of the elements of mystery and small townsfolk then you are sure to enjoy Sycamore too.

For the next novel on this list of books like Where the Crawdads Sing, we step across the pond to an unnamed town in Northern Ireland. Winner of the 2018 Man Booker Prize, Milkman is another coming of age tale this time set in the 1970’s amidst the troubles that plighted the country.

From the onset, Anna Burns has created a unique yet consistent voice of her resilient, astute and amusing first-person protagonist, Middle sister, with her distinctive use of language and unique style of writing.

When Middle sister starts to be harassed by the man she refers to as Milkman, an older, married man with a political agenda, she starts to get noticed and during those unsettled times, to be noticed was incredibly dangerous.

The portrayal of the power of gossip, silence and judgement in a tight-knit community in Milkman is synonymous with that of Barkley Cove in Where the Crawdads Sing with the pressures of who you are and who you are seen with weighing heavily on the storyline.

The Great Alone, by Kristin Hannah

An instant number one on the New York Times Bestseller list, The Great Alone by Kristin Hannah is as unforgiving and unpredictable as the wilds of Alaska in which it is set.

When Ernt Allbright returns from the war in Vietnam he is a changed man, aggressive, volatile and struggling to adapt to life. Unable to keep a job or maintain any stability he impulsively tries to escape, moving his wife and daughter, 13-year-old Levi, to North Alaska for a fresh start and to live off the grid.

At first, the family’s prayers were answered and this new life seemed to suit them, but when the cruel, bitter winter arrives plunging them into 18 hours of darkness each day, their old life starts to catch up on them as everything they built starts to crumble.

The Great Alone is a story of love, loss and human frailty, the consistent themes of the wildness of man and nature make the novel the perfect accompaniment for anyone looking for more books like Where The Crawdads Sing.

The Snow Child, by Eowyn Ivey

Finalist for the 2013 Pulitzer prize, Eowyn Ivey’s The Snow Child is a compelling read sure to thrill and captivate anyone looking for books similar to Where the Crawdads Sing.

Set in 1920 in another snow-filled Alaskan backdrop, we follow childless couple Jack and Mabel as they struggle with life in the wilderness, Jack is as crippled by work on their farm as Mabel is by loneliness, but one day in a fleeting moment of happiness they build a snow child outside.

The following day the snow child they built has vanished and in its place is a young girl called Faina, alone except for the red fox which she hunts with, Faina lives off the land and has somehow managed to survive in the forest all alone.

Feeling as though you are in the middle of some sort of fairy tale, The Snow Child sees Jack and Mabel start to care for Faina as if she is their own daughter but, in the hauntingly beautiful yet violent Alaskan forest, nothing is really as it seems and what they eventually learn about Faina will ultimately change their lives forever.

Another option for Reese Witherspoon’s book club and winner of the Costa Debut Novel Award,  Gail Honeyman’s Eleanor Oliphant is Completely Fine is a story of isolation, loneliness, unrequited love and friendship which highlights the importance of kindness and therefore the perfect read for anyone looking for more novels like Where the Crawdads Sing.

The novel centres around Eleanor Oliphant, 29-year-old alternative heroine, incredibly intelligent but socially awkward. She has had the same haircut since she was 13, she eats the same meal deal for lunch every day, always completes The Daily Telegraph crossword puzzle and drinks two bottles of vodka each weekend.

But, after a chance encounter with the handsome lead singer of a local band, her routine is shaken up as Eleanor becomes convinced that he is the one and so we follow her hilarious quest for love as the narrative slowly unfolds revealing Eleanor’s troubled past and clues to why she is the way she is.

Eleanor Oliphant is Completely Fine is an unusual yet thought-provoking novel filled with both warmth and sadness and is an ultimately wonderful read.

Already read this book? Check out our list of more books like Eleanor Oliphant is Completely Fine!

Before We Were Yours, by Lisa Wingate

Lisa Wingate’s 2017 novel, Before We Were Yours is based on a real-life scandal and is a thoroughly riveting, wrenching and uplifting story of sibling love and the heavy toll that secrets can have.

There are two narratives to follow which circle over the past and present, the past is set in Memphis in 1939 where we meet 12-year-old Rill Foss and her four younger siblings who become the target of a kidnapping scandal. Ending up in the Tennessee Children’s Home Society Orphanage we follow Rill’s struggle to take charge and keep her siblings together.

The other narrative is present-day South Carolina where we follow Avery Stafford, a privileged public prosecutor with a lavish wedding to her handsome, successful fiancé on the horizon. Her life is pretty much perfect until a chance encounter turns her world upside down and initiates a journey through her family’s past.

If you liked Where The Crawdads Sing because you enjoyed the interweaving narratives and family obligation then you are sure to find Before We Were Yours an absolutely thrilling read.

Though Educated by Tara Westover is a memoir, it has been selected for this list of books like Where the Crawdads Sing because it is a story of one woman’s quest to succeed against the odds and outgrow labels she didn’t choose because of her family which is synonymous with Kya’s struggles.

Westover was born into a Mormon family and grew up in the very picturesque but isolated mountains of Idaho, Educated is her story of leaving behind this secluded life of alienation and getting accepted onto a PHD program in Cambridge University.

Despite having no formal education until going to college at the age of 17, Westover recalls her daily battles to fit into this world beyond the mountains.

Educated is a real-life coming of age story which chronicles a young woman’s strength and defiance to study her way out of one life and into another, finding herself a place in this world with the help of books. So if you like those elements of Kya’s character in Where the Crawdads Sing then you are sure to be compelled by Westover too.

Have you already read this book? Make sure to check out our list of more books like Educated!

The novels forming this list of books like Where the Crawdads Sing are modern retellings of the coming of age genre. Seeped in mystery, evocative imagery and wildlife which all play an intrinsic role in the storylines along with strong, sometimes unsuspecting, heroines on a quest for love, belonging and friendship.

This list has scoured the globe from Arizona to deepest darkest Alaska to war-torn Northern Ireland and revealed some prize-winning and notable authors to join Delia Owens on your radar.

Are you looking for more books similiar to Where the Crawdads Sing? Have any recommendations that didn’t make the list? Let us know in the comments! 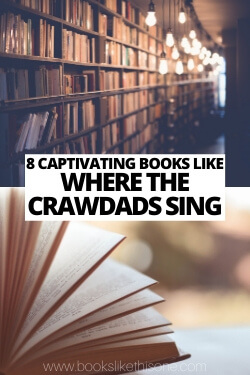