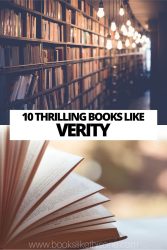 While it may seem impossible to find another book as thrilling and incredible as this one, I was able to find 10 books like Verity that will quench your thirst.

The unforgettable story of Verity surrounds accomplished writer Verity, her ghostwriter Lowen and Verity’s husband Jeremy. After Verity’s accident that leaves her paralysed, Jeremy finds another writer with a similar style to his wife’s to help complete Verity’s book series.

Lowen moves into the couple’s house temporarily to write the books but what she discovers in the process, is what nightmares are made of.

If you’re ready to read more books similar to Verity then look no further, here is the list you need.

The Lies That Bind, by Emily Giffin

If you loved the never-ending twists from Verity, and other books like Verity, then you will love The Lies That Bind.

The beginning of the book is set in the spring of 2001 and the main character, Cecily, meets a perfect guy at a dive bar. She and Grant both feel a strong connection that keeps growing as they continue to date. Even when Grant goes to Europe for a job and with an ocean between them, they grow closer.

The tragedy of 9/11 leaves Cecily and the whole country devastated, especially when she finds out that Grant was in one of the towers. The pain of the possibility that Grant is dead only magnifies when she starts learning all of Grant’s secrets. She won’t stop her search until she knows the full truth.

Kya is known as the “Marsh Girl” by locals in a fishing village. At a young age, she is abandoned to fend for herself by every member of her family.

She figures out how to survive and knows the marsh like the back of her hand. This is why when the dead body of Chase Andrews is found, everyone blames Kya.

Similarly to Verity, Where The Crawdads Sing is a page-turner and will have you questioning what the truth is. Kya has always yearned for love and acceptance, which she didn’t receive from her family or the townspeople.

She finally learns a little about love from two boys, at different times of her life, that seem to embrace her wild side and beauty.

While Kya is arrested for the murder of Chase and put on display in court, there is no telling which side the jury will settle on.

The Husband’s Secret, by Liane Moriarty

After the death of her husband, Cecilia discovers a letter from him that is only meant to be read after his passing and which contains a dark secret.

This letter leaves Cecilia wondering if she ever really knew her husband, along with the burden of deciding what to do about his secret.

In The Husband’s Secret, the women carry around so much pain, guilt and questions. Cecilia befriends Rachel and Tess, who have been greatly affected by her husband’s secret.

By revealing the secret, Cecilia can either lessen their pain or destroy each person involved – including herself.

I Am Watching You, by Teresa Driscoll

Imagine seeing two young girls on the train talking to two men who were freshly released from jail and wanting to warn them but not wanting to intrude. Then the next day you see one of the girls, Anna, on TV because she’s gone missing.

Ella has to learn to live with the guilt of not speaking up until she starts to receive threatening letters a year after Anna’s disappearance.

In I Am Watching You, we also learn about Anna’s friend Sarah who was with her on the train. While the investigation is still open, it seems that everyone questioned has something to hide, even Anna’s family.

Like books similar to Verity, there’s a twist and turn in every corner until the whole truth is revealed.

Written by the same author as Verity, It Ends With Us has a similar unexpected journey to love. The main character, Lily moves to Boston to open up a flower shop.

Lily ironically loves flowers but her main reason for this move was for the promise she made to her teenage love, Atlas, to live there one day.

Lily grew up in an abusive home, where her dad mistreated her mom and she believed history would never repeat itself with her. When she meets Ryle, the connection is instant, although it takes some time for them to start dating.

However, a few months after moving to Boston, she sees Atlas and her future is uncertain.

Similar to books like Verity, in A Good Girl’s Guide to Murder, the reader has to follow along closely as the main character, Pippa, seeks out the truth.

Pippa is in her last year of high school and for her final project, she settles on the murder case of a local girl named Andie. The case was closed, with the murderer, Sal, convicted. However, in her investigation, Pippa digs up more than she was expecting.

Now she believes the police and the whole town was wrong about Sal and the real killer is still roaming free.

As Pippa gets closer to the truth, the killer will not stand by and willingly be discovered. Pippa has to decide whether finding the truth is worth risking her own life.

Already read this book? Check out our list of more books like A Good Girl’s Guide to Murder!

Too Good to Be True, by Carola Lovering

Just as the title suggests, this story is Too Good to Be True. The book opens up with Skye and her boyfriend of a few months, Burke, getting engaged.

What looks like a cute love story from the outside will leave you questioning the truth at every turn.

Skye struggles with severe OCD and Burke seems to be the only man who understands and loves her.  On paper, Burke is the perfect guy for Skye. That is, until we learn about Heather, his wife, and get all three versions of the story.

The reader must decide whose side they will take and if there are any innocent parties involved.

When Nick’s wife, Amy, goes missing on their fifth wedding anniversary, he needs to prove his innocence.

Nick and Amy’s relationship in Gone Girl is comparable to Verity and Jeremy in the way that they seem perfect to the outside world but when you peel the layers they are everything but perfect.

While the police build their case on Nick, he doesn’t do any favours for himself and starts acting suspiciously. Even though Amy is missing, we get to hear her side through her diary entries.

The question is not only where is Amy but who is telling the truth and is Nick the one to blame.

Set in New York City during the 1940s, City of Girls tells the story of Vivian’s life, starting from when she was 19 years old and just moved to the city to live with her aunt to when she’s 95 years old.

Vivian dreams of being a fashion designer and helps make costumes at her aunt’s theatre, the Lily Playhouse. She recalls the lessons she learned the hard way and how freeing it was to stop being ashamed of who she was.

Similar to books like Verity, we see the normalisation and celebration of female sexuality. We also witness a unique love story, while different it doesn’t take from its beauty.

In the novel In Five Years, Dannie lives by numbers and is on track to accomplish everything she has planned for in her five-year plan. She is newly engaged to her supportive boyfriend, she does amazing at the interview with her dream law firm and is living at a decent place in New York City.

However, that night she has a dream that feels more like a premonition, in which she is five years older and with a different guy. When she wakes up, she can’t shake the dream off but her life continues.

Then, more than four years later, when she still can’t pick a date for her wedding, she runs into that man from her dream. After that, Dannie needs to decide whether to stick to her plan or throw it out the window.

We sometimes read books not only for the escape but for the emotions they provoke in us. Books similar to Verity will have you questioning your own sanity and the endings will leave you speechless. You can decide for yourself which truth to believe.

Are you looking for more books like Verity? Have any recommendations that didn’t make the list? Let us know in the comments! 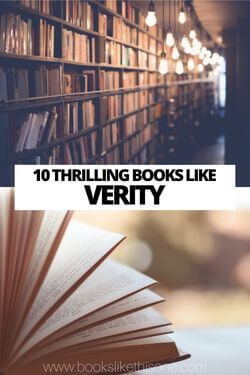