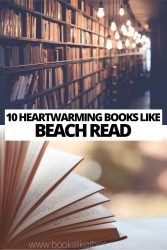 Books like Beach Read are not only perfect to read on vacation but anywhere and anytime you need a cute but unique romance book.

In the book, January and Augustus are writers who don’t really see eye to eye but both are struggling with writer’s block. By chance, they end up staying at beach houses right next to each other during the summer where they plan on getting inspiration to finish their respective novels.

The two make a pact to help each other by teaching one another how to write in the other’s genre. While Augustus doesn’t care for romance, he and January may end up creating a love story of their own.

Written by the same author, People We Meet on Vacation follows a similar vacation theme as books like Beach Read, as well as a long-awaited love story.

Poppy and Alex had been best friends since college. They started the tradition of taking summer trips and had done them for ten years. The two had a falling out and didn’t speak for two years but Poppy hated every moment of it and it turns out Alex did too.

When Poppy realises that she was the happiest during the trips with Alex she finally reaches out, and she promises herself that she will do anything to make things right again. The two agree to try one of their summer trips to work on things.

Even though they’re best friends, there may be something much bigger and better between them. But are they ready to explore the what-ifs and potentially ruin their friendship?

Josh and Hazel’s Guide to Not Dating, by Christina Lauren

Hazel, who has no filter but is a ball of sunshine, is tired of guys never wanting anything serious with her. Her friend from college, more of an acquaintance, Josh, is having trouble with confidence and dating after his girlfriend cheats on him.

They each set up numerous double dates with people they think will be great for the other person, but along the way, it seems they enjoy each others’ company more. This relationship development is similar in books like Beach Read.

In the world of dating, or not dating, Josh and Hazel must decide whether to stay platonic or give into love.

Imagine sharing a flat and a bed with someone you’ve never met. In The Flatshare, after a bad breakup, Tiffy responded to an ad for a flatshare.

It sounds like a perfect situation, while Tiffy works during the day, her flatmate Leon works at night. With their opposing work schedule, they never cross paths and can live in the flat peacefully.

Time passes and although they still hadn’t met, they start to get to know each other via little notes around the flat. A friendship quickly forms and as they lean on each other, something stronger may start to brew.

After months of notes and text messages, will meeting face-to-face be as magically as they both hope or will it mess up their living arrangement?

Just Last Night surrounds four very close long-life friends in their thirties who’ve met every Thursday for pub trivia night for years. Eve, Susie, Justin and Ed have a friendship that the outside world doesn’t understand but they don’t care.

While it seems like they are all platonic, Eve and Ed have undeniable chemistry and even shared a kiss in college. However, Ed has a long-term girlfriend and while Eve has dated over the years, she can’t get over what she feels for Ed.

The friend group is put to the test when a tragic event happens and they have to decide whether they stick by each other or whether it’s too painful to continue their friendship.

Things You Save in a Fire, by Katherine Center

In Things You Save in a Fire, Cassie is one of the only female firefighters but is known as one of the greatest. After learning about her estranged mother’s illness, and being persuaded by her father, she moves from Texas to Boston to help her out.

Cassie goes from being respected as a fellow firefighter to being treated like a girl who doesn’t belong in her new firehouse. So she does what she knows best to prove herself while also trying very hard not to fall for the new rookie firefighter.

Even when she tries to avoid both her mom and the rookie, she can’t help but let them in. Along the way, Cassie will deal with some life-threatening and life-changing situations, but the scariest part of all might be letting her heart lead the way.

99 Percent Mine, by Sally Thorne

99 Percent Mine follows Darcy, a photographer who doesn’t like to stay in one place for long. While she found her dream man at age eight, she can’t do anything about it because her twin brother claimed him first as his best friend.

After their grandmother passes away, they are left in charge of fixing up and selling her cottage. Since Darcy doesn’t trust her brother with maintaining their grandmother’s magic touch in the house, she decides to stay until the renovations are over.

She is pleasantly surprised when her brother’s best friend and her first love Tom is the one fixing up the house with his new company. For once, Darcy can envision a life where she can settle down in one place and she will do what it takes to get 99 per cent of Tom’s heart.

Are you a fan of Sally Thorne? Check out our list of more books like The Hating Game!

In Meet Cute, Kailyn literally runs into and falls on top of her celebrity crush Daxton Hughes on her first day of college. It turns out he is also attending school there and they become friends — until he betrays her.

Eight years later, after a traumatic accident, Kailyn and Dax’s paths cross once again. While they are both lawyers, in different sectors, Dax meets with Kailyn to ask for legal advice. This causes them to reconnect but Kailyn still doesn’t trust Dax.

Similar to books like Beach Read, as Kailyn spent more time with Dax and his teenage sister, her mistrust and heart start to melt. But is it enough to make her forgive the betrayal and choose happiness?

Would Like to Meet is filled with many meet-cute moments when Evie, who is an assistant at a screenwriting agency, agrees to help an important client with his script. The client, Ezra, is struggling with writer’s block like January and Augustus in Beach Read.

Her success in helping Ezra can mean a long-overdue promotion for Evie along with saving the future of the agency but if she fails she could lose everything. In order to accomplish her goals, Evie must put aside her disbelief in movie-worthy love stories and open her heart up for love.

Throughout some embarrassing meet-cute fails, Evie meets two special people who help her during the rest of this wild journey. Maybe with the right person and the right meet-cute, Evie can begin believing in love again and save her job.

Like books similar to Beach Read, Normal People follows two people who are so different from each other but something keeps bringing them together.

Connell and Marianne attended the same school for years but Connell was popular and Marianne wasn’t at all. Connell’s mother works for Marianne’s family, so they see a lot of one another in and out of school.

When the two became friends and then more, Connell hides their relationship from the rest of the world. Thanks to her family, Marianne never felt that she was good enough and now being kept a secret, her insecurities continue to expand.

When they both start studying in Dublin at Trinity College, the tables are turned because now Marianne is popular and Connell feels out of place. Years go by with them coming and going, together and apart.

Even though they’ve had some good times, they have to decide whether it’s worth it to keep saving each other.

One Day in December, by Josie Silver

Imagine minding your own business on the bus when you look out the window, make eye contact with a man at the bus stop and realise he’s “the one.”

This happened to Laurie in One Day in December and after feeling the magic from that moment she goes the whole year searching every face in London trying to find the guy again. Unfortunately, she does finally see him on Christmas, but he’s dating her best friend.

In ten years a lot can happen. Like other characters in books like Beach Read, Laurie has a hard choice to make whether to follow her heart or put others’ happiness before hers.

Have you already read this novel? Check out our list of books like One Day in December!

A good book is almost as essential as your passport for any vacation. Books similar to Beach Read will add the extra warmth you may need on your next beach vacation. The books share a common theme and heartfelt love story that is sure to lift you off your feet.

Are you looking for more books like Beach Read? Do you have any recommendations that didn’t make the list? Let us know in the comments! 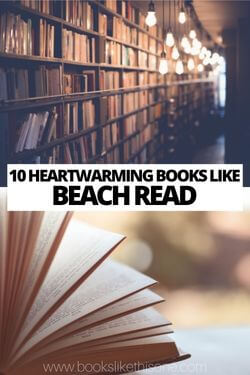