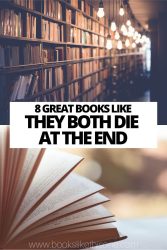 Knowing when you’re going to die is a hook that draws in many a reader. They Both Die at the End plays with this hook well as Rufus and Mateo are given 24 hours notice that their time on this mortal coil is up. Exploring what life actually means and how distracted we get by trivialities, Mateo and Rufus have you examining your own life as you read through. Yet, if you’ve already sobbed your way to the end, what other books like They Both Die at the End are out there?

Friendship lies at the heart of They Both Die at the End and similar titles use this theme to catch a reader unawares. Aristotle and Dante Discover the Secrets of the Universe has you turning the pages just from the title alone.

Ari and Dante are two teenagers growing up in El Paso, Texas during the 1980s. All told from Ari’s point of view, we follow the boys burgeoning relationship that stretches across cultural divides and more.

Faced with constant adversity, homophobia, and their own internal struggles, you can’t help but root for both boys as they discover that there is a richness to life that extends beyond worrying about what other people think of you.

Already read this book? Check out our list of more books like Aristotle and Dante Discover the Secrets of the Universe!

On the surface, Denton Little’s Death Date has much in common with Adam Silvera’s lauded novel. But some books like They Both Die at the End tickle your funny bone just a bit more than Rufus and Mateo do.

Set in a world where everyone knows when they’re going to die, Denton Little just wants a normal life. Trouble is, he knows he’s going to die younger than most. At his senior prom in fact.

So, Denton tries to cram in as many life firsts he can before his number’s up. Sex, hangovers, and more are on Denton’s checklist, but as the prom gets closer, Denton’s thrill ride becomes more and more thoughtful as he begins to wonder what’s truly important to him.

Funny, silly and emotional in places, Denton Little’s Death Date is well worth your time.

The Love Interest, by Cale Dietrich

Alex Rider meets Mr. and Mrs. Smith. Books similar to They Both Die at the End gamble in playing with a number of genres. Sometimes it works, sometimes it doesn’t.

The Love Interest mixes romantic comedy with a spy caper that has a ruthless twist.

Caden and Doyle are both teenaged spies, cultivated to be ‘love interests’ to powerful people by a secret organization. Now, they’re both outside competing for the affections of a girl the organization wants an in with. Whoever the girl chooses is in luck, but whoever the loser is, dies.

Suspend a little belief, and you will enjoy this fun and action-packed caper till the end.

Lies My Girlfriend Told Me, by Julie Ann Peters

There are a few books like They Both Die at the End that you try hard not to roll your eyes at before getting pulled in despite yourself. Lies My Girlfriend Told Me does this very well.

Seventeen-year-old Alix gets woken up one morning by her parents with some terrible news. Her girlfriend, Swanee, died from a heart attack.

Alix is distraught but as she goes through Swanee’s old things, she comes across text messages on Swanee’s phone that indicate her deceased girlfriend was in another relationship with someone called L.T. and L.T. doesn’t know that Swanee is dead.

What makes this story work, is that it doesn’t make the gay relationship central to the story. Lies My Girlfriend Told Me is all about lies, deceit, heartache and forgiveness – all the things every human being goes through in their teenaged years and beyond.

We Are the Ants, by Shaun David Hutchinson

Is the world worth saving? Perhaps the better question is, are human beings worth saving? In We Are the Ants, Hutchinson plays with both questions as Henry Denton wrestles with these questions.

Teenager Henry has spent his whole life being periodically abducted by aliens, but then they give him an ultimatum: Henry can stop the world ending in 144 days. All he has to do is push a big red button.

With Henry examining his own life (which hasn’t been great thus far), the reader is pulled along a dizzyingly sweep of emotions as we are forced to face the same questions Henry is. The world might be worth saving, but are humans worth saving?

I Hope You Get This Message, by Farah Naz Rishi

If you look at the past decade (and especially the years since 2019), it’s hardly surprising that books similar to They Both Die at the End appear obsessed with the end of the world.

I Hope You Get This Message forces a reader to think about what you would do if you found out the world was going to end in seven days.

Following several high school teens after aliens make contact, this story weaves in and out of the lives of Jesse Hewitt, Adeem Khan and Cate Collins.

Jesse feels like nothing in his life is permanent, whether it’s the latest guy he’s hooked up with or the multiple jobs his mum tries to hold down. Cate’s obsessed with finding the father she’s never met whereas Adeem is trying to decide whether to forgive his sister for leaving him behind.

At heart, I Hope You Get This Message is less about a potential alien invasion, and more about the things you live to regret.

Books like They Both Die at the End sometimes ponder what it would be like if you could actually avert disaster.

In Aversion, Gemma Green is an ‘averter’, someone who can plant a specific thought into someone’s mind to set them on their right path and avoid potential disaster.

When she plants a thought into Russ’s mind, everything seems to go smoothly. There’s just one problem: Russ now won’t leave her alone because he remembers something. Gemma knows she needs to avoid him, but soon realises that there is something about Russ she is drawn to as well.

Poignant, funny and sweet. Aversion is a rich and mysterious look at the end of one relationship and the beginning of new ones.

For some people, death is the ultimate adventure and many books similar to They Both Die at the End enjoy exploring the nuance around this.

Finch is intrigued by death and counts all the different ways he might kill himself. Violet is also counting; she’s counting down how many days are left before she can graduate and leave the grief of her sister’s death behind.

When Finch and Violet meet on the edge of their school’s belltower, both remain uncertain as to who’s saved whom.

Their experience leads to them striking up a relationship that sees Finch realising that there might be more to life than death whilst Violet forgets to count all the days until graduation. Yet, as Violet expands her horizons, Finch’s start to contract.

Interrogating the effects of depression, suicide and more, All the Bright Places is an intelligent look at what it means to be human. Recommended for adults and young adults alike.

Books like They Both Die at the End can be funny, sad, heartwarming, thrilling and mysterious… sometimes all at once. Death is something humans have been obsessed with since we first evolved as a species. The books on this list examine the diverse ways people approach life and death.

Are you looking for more books similar to They Both Die at the End? Have any recommendations that didn’t make the list? Let us know in the comments! 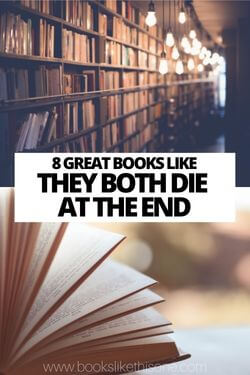