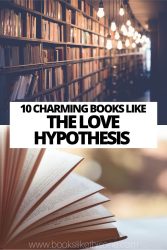 Books like The Love Hypothesis provide heartwarming scenes, loveable characters and give us hope that love prevails. With the popular fake relationship trope as the main point of conflict, this book will make you laugh, blush and cry.

We all know someone who has a pessimistic outlook on love, much like our main character, third-year PhD candidate, Olive Smith. Olive doesn’t believe in long term lasting relationships however, when she tells her best friend, Anh, she has moved on and is dating once more, the one thing Anh needs is proof.

Panicked, Olive kisses the first man in sight which happens to be Adam Carlsen, a critical and unapproachable young professor who decides to keep up the charade. When things go awry at a science conference and Olive’s career is put in jeopardy, Adam has her back.

Soon, Olive finds that fake feelings can easily be mistaken for real ones and she is very close to falling in love herself.

If you’re looking for more books similar to The Love Hypothesis these ten suggestions are worth adding to your reading list!

Everyone knows there is a fine line between love and hate, but no one more than Lucy Hutton and Josh Templeman. In this debut rom-com, we meet Lucy who prides herself on being liked by everyone in the office – everyone but Josh and the feeling is mutual.

Trapped in an office together for over forty hours a week, a never-ending game of upmanship begins. When a promotion comes up for grabs, Lucy and Josh turn it into their next game where the winner becomes the other’s boss. If she loses, Lucy plans on resigning.

When the two share a steamy kiss in the elevator, Lucy starts to wonder whether she does truly hate Josh after all. The Hating Game has the enemies to lovers trope that is perfect if you’re looking for more books like The Love Hypothesis.

After another breakup with her ex-boyfriend, Tiffy is desperate to leave his apartment and needs something cheap, fast and easy. The perfect solution comes up in the form of a flatshare.

Leon Twomey works night shifts and needs some quick cash, so he offers out his apartment whilst he works. The two start leaving notes for each other around the flat but as months begin to pass, the two haven’t even met yet.

With crazy ex-boyfriends, demanding jobs, wrongly imprisoned brothers and more, the two realize love blossoms in the strangest of places. Written from both Tiffy and Leon’s perspectives, we get to see both sides of the arrangement as well as benefit from two different writing styles.

The Flatshare is a great alternative for those looking for books like The Love Hypothesis.

Catalina is in desperate need of a date to her sister’s wedding in Spain after a little white lie about an American boyfriend spirals out of hand. With four weeks to find someone willing to fly to Spain and pretend to be her boyfriend in front of everyone she knows, Catalina is desperate.

However, she is not desperate enough to accept Aaron Blackford’s offer. To Catalina, Aaron is the most insufferable man alive however as the wedding draws nearer, it looks like he might be her best option.

The Spanish Love Deception is the perfect enemies-to-lovers, fake dating rom-com for those wanting more slow-burner books similar to The Love Hypothesis.

For a heart-wrenching tale of love and loss, It Ends With Us is an unforgettable book like The Love Hypothesis.

Lily has worked hard for the life she lives with her own business in Boston, far from the small town she grew up in. She meets Ryle, a handsome neurosurgeon, who is arrogant and stubborn and has an unusual dislike of relationships.

Despite this, Lily and Ryle’s relationship is threatened when Atlas, Lily’s first love, reappears in her life.

This widely praised book explores the devastating repercussions of domestic abuse and takes a deeper look at love itself.

Entwined, by A. J. Rosen

Entwined is set in a world where soulmates exist among a race descended directly from the Greek Gods, Avery Montgomery isn’t sure she even wants a soulmate.

Now seventeen, Avery will go to her first Gathering where she will meet her soulmate and be tied to them forever through the ability to share thoughts with one another. Avery hopes her soulmate is Adrian who is charming and energetic but why does she feel connected to Vladimir, her best friend’s older brother?

In her attempt to find true love, Avery realizes the world of Hellenicus is not quite what she thought and now she must make a choice and the wrong one might risk the wrath of the Gods.

This riveting book is a great alternative for those wanting more books like The Love Hypothesis.

Books similar to The Love Hypothesis tell stories about love found in unexpected places. In The Seven Husbands of Evelyn Hugo, old Hollywood icon, Evelyn Hugo, is finally prepared to tell the truth about her reclusive and scandalous life.

When she chooses Monique Grant as her biography writer, no one is more shocked than the small magazine reporter herself.

Taken to Evelyn’s luxurious home, Monique listens as Evelyn tells the story of her life from Los Angeles in the 1950s to leaving her career in the 1980s as well as the seven husbands she married along the way.

As Evelyn reveals her life’s secrets, Monique is determined to use this to kickstart her writing career. However, as more and more are revealed, Monique begins to realize Evelyn’s life intertwines with her own in ways she couldn’t imagine.

It Happened One Summer is perfect for fans of the TV show Schitt’s Creek as we follow Piper Bellinger, a fashionable wild child who the paparazzi love to report on.

Following a crazy night with too much alcohol, Piper finds herself in prison. Her stepfather cuts her off and sends her to Washington with her sister to run their late father’s bar. Piper meets Brendan, a bearded sea captain who holds out no hope that Piper will last outside of Beverly Hills.

Determined to prove her stepfather and Brendan wrong, Piper finds herself enjoying the quiet life and developing feelings for the sea captain who sails off for weeks on end. LA is what she knows but is it what she really wants?

It Happened One Summer has the rom-com elements that make books like The Love Hypothesis so popular.

If you like easy-to-read and uplifting books like The Love Hypothesis then Eleanor Oliphant is Completely Fine is a great alternative.

Eleanor Oliphant tends to lack the necessary social skills she needs to form human connections and usually says exactly what she is thinking. Her carefully planned out life is fine – not bad but not good. When Eleanor meets Raymond, the unhygienic IT man at work, everything changes.

The two save an elderly man from a fall and Eleanor finds herself leaving the life of isolation she created for herself, soon finding that maybe she can make friends and fall in love after all.

Have you already read this novel? Check out this list of books like Eleanor Oliphant is Completely Fine!

People We Meet On Vacation, by Emily Henry

For a fresh take on the friends-to-lovers trope, People We Meet On Vacation is the perfect book similar to The Love Hypothesis.

Best friends since college, total opposites Poppy and Alex take a vacation together every summer. Poppy lives in New York whilst Alex still lives in their small hometown so this week of fun is their chance to catch up until two years ago – the two haven’t spoken since.

Missing her best friend, Poppy asks Alex if he wants to join her on a week away one last time and surprisingly, he agrees. With a week to fix everything and unspoken feelings lingering in the air, can Poppy and Alex make up?

Much like The Love Hypothesis, The Kiss Quotient has a protagonist who believes in facts and figures over the complicated idea of love and relationships.

Stella Lane creates algorithms that predict customer purchases leaving her with a lack of dating experience and more money than she knows what to do with. Stella also has Asperger’s and her lack of experience at thirty years old worries her, leading her to hire escort Michael Phan.

He teaches her about foreplay, sex positions and more but as they continue their partnership, they must examine their own feelings.

For a refreshing take on the romance genre like The Love Hypothesis, The Kiss Quotient will quench that thirst!

Books like The Love Hypothesis illustrate the obstacles we face and must overcome whilst looking for love, friendship and happiness. Each of these books has a different take on the romance genre and has something fresh for those looking for something similar to read!

Are you looking for more books similar to The Love Hypothesis? Have any recommendations that didn’t make the list? Let us know in the comments! 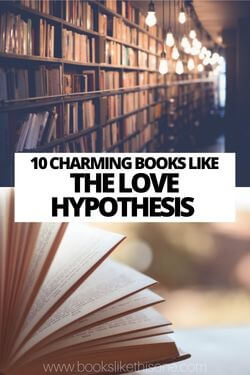