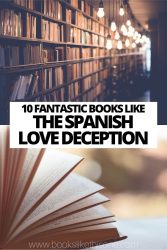 Are you on the hunt for more books like The Spanish Love Deception?

Everyone loves a good enemies-to-lovers trope and it doesn’t get better than The Spanish Love Deception by Elena Armas. When a little white lie about an American boyfriend spirals, Catalina is desperate to find a date for her sister’s wedding in Spain. To make matters worse, the groom’s brother is Catalina’s ex who left her with more bad memories than good.

Determined to avoid the pity that she’ll no doubt experience from her family, she now has four weeks to find someone willing to fly to Spain and be her pretend boyfriend. The only offer she receives is from the arrogant Aaron Blackford, her nemesis and co-worker. As the wedding draws nearer, she realizes Aaron may be her best option.

Elena Armas will give you a fresh take on fake dating in the new adult genre. For books similar to The Spanish Love Deception full of slow-burn romance, great banter and unrequited love look no further than the list I have compiled below.

After quite literally running into her celebrity childhood crush, Daxton Hughes, on her first day of law school, Kailyn is mortified. What she didn’t expect was the friendship that ensued or his subsequent betrayal.

Eight years down the line, Daxton turns up at her legal office for advice. Daxton has just become the legal guardian of his thirteen-year-old sister so Kailyn can’t help but feel sorry for him. The more time she spends with Daxton and his sister, the more she feels like a part of the family and the chemistry they once had begins to grow again.

But Kailyn’s boss is begging her to get Daxton onto their firm and if she does, there’s a promotion waiting. Now, it’s a choice between her heart and her head.

Meet Cute is the perfect alternative for those wanting a high stakes romance book like The Spanish Love Deception.

Weddings are an event you either love or dread and for our main character, it is a mix of the two.

As one of the top wedding planners in DC, Carolina acknowledges the irony of being left at the alter at her own wedding. After impressing a client, she is given the opportunity to change her life.

Meanwhile, marketing expert Max begins working for a hotel client who are looking to expand their brand. Then he realizes he’ll be working with his brother’s ex-fiancée.

Carolina hates Max after he convinced his brother to leave her at the altar but now the two have to set their difference aside. The two quickly learn that the feelings between them may extend further than hatred.

The Worst Best Man is great for fans of wedding-themed books similar to The Spanish Love Deception.

The Road Trip, by Beth O’Leary

Addie and her sister have packed up the car with bags, snacks and drinks for a road trip up to Scotland for a friend’s wedding. Just after their journey begins, a car crashes straight into the back of Addie’s own and it is none other than her ex-boyfriend, Dylan, and his best friend who she hasn’t seen since their awful breakup.

Dylan has totaled his car and funnily enough, is also heading to the wedding. With no other choice than to offer them a ride, Addie and Dylan have to confront their past and decide whether this is truly the end of the road for them.

Also following a group of wedding guests attempting to sort out their own love lives, The Road Trip is perfect for those looking to fill a The Spanish Love Deception hole.

Revenge is sweet in this contemporary romance where interior designer Dani Porter decides to buy the plot of land next to her ex-fiancée’s house – the plot of land that was supposed to be their new home before he cheated with their realtor.

Planning a holiday rental that will ruin his views, mess with his peace of mind and prove Dani has a backbone, this project is the perfect revenge plot. Teaming up with Wyatt Montego, the uptight architect at her firm, Dani finds herself spending a lot of time with him and realizes she might have found something better than revenge.

Similar to The Spanish Love Deception with its enemies-to-friends-to-lovers story, Love at First Spite will delight any romantic comedy fan!

The Upside of Unrequited, by Becky Albertalli

If you like a sweet young adult romance, then The Upside of Unrequited is for you.

Molly Peskin-Suso has had far more crushes in her seventeen years of life than the average person and yet still hasn’t had her first kiss. Her cynical twin sister, Cassie, meets a new girl and turns into a lovesick mess so Molly is now as lonely as it gets.

But Cassie’s new girl has a cute sidekick, Will, who flirts outrageously with Molly and leaves her with another crush to add to the list. However, Molly’s nerdy co-worker, Reid, is growing on her.

Will either of these crushes grow into something more or is Molly stuck in a cycle of unrequited love?

For a butterfly-inducing romance book similar to The Spanish Love Deception, this book has everything you need.

The Paid Bridesmaid, by Sariah Wilson

In The Paid Bridesmaid, Rachel Vinson is a bridesmaid for hire: someone to talk to, someone to help plan the wedding and discretion is guaranteed.

Her next job is a location wedding for a social media influencer that could help her business grow. However, Camden Lewis seems to be everywhere she goes.

No idea what her true role at the wedding is, he’s convinced she’s a spy out to get his company so keeps her in eyesight at all times. As the week of wedding events plods along, the two get to know each other and realize maybe it is time for Rachel’s own trip down the aisle.

Like The Spanish Love Deception, this novel has humour and heartwarming scenes that make the reader’s heart flutter.

The Dating Plan, by Sara Desai

Daisy Patel has a life plan that she is determined to stick to that does not involve romance whatsoever.

With an insistent family who are waiting for her marriage announcement, Daisy asks her childhood crush to be her fake fiancée. Liam Murphy agrees to the plan after realizing his own inheritance is dependent on being married, according to his late grandfather’s will.

The two set out on numerous dates to legitimize their fake relationship and find that this marriage isn’t as convenient as the two first thought.

If you like the fake dating aspect of The Spanish Love Deception, then The Dating Plan is right up your street.

For a book like The Spanish Love Deception that shows the power of new beginnings and gives an engaging romantic comedy, then Shipped is right up your street.

Cruise line marketing manager Henley Evans doesn’t have a lot of time for herself, family or friends with taking night classes, let alone romance. However, when she is shortlisted for a promotion, she finally meets the other candidate, Graeme Crawford-Collins.

Despite having never met, Graeme and Henley have an office famous rivalry, battling it out through vicious emails. Tasked with writing the best proposal on how to boost bookings in the Galapagos, they are sent on a cruise to the islands together.

Graeme is not what Henley thought he would be and she soon finds defining the line between hate and love is harder than she first believed.

The Soulmate Equation, by Christina Lauren

In The Soulmate Equation, single mother Jess Davis gave up on the dating world a long time ago after absent parents and her own ex disappearing right before their daughter was born. Then Jess hears about the latest dating app, GenticAlly, that uses DNA based matchmaking.

When Jess receives an unheard-of ninety-eight per cent match with GenticAlly’s founder, Dr River Pena, she knows something’s up. River is stuck up and she knows he can’t be her soulmate.

However, when GenticAlly offer her money to get to know him, Jess knows it is the best way to make ends meet and who knows, maybe she’ll find love along the way.

For a book like The Spanish Love Deception that walks the line between fate and choice, this one is for you!

It may be an obvious suggestion but if you are looking for books like The Spanish Love Deception, why not pick up another of Armas’ books?

The American Roommate Experiment is set after The Spanish Love Deception’s epilogue, the novel follows Carolina’s best friend, Rosie, who quits her day job to become a romance writer. With crippling writer’s block and a crumbling apartment, she decides to get a change of scenery.

Carolina’s apartment is free while she’s out of town and Rosie has a spare key, however, she is surprised to find Carolina’s cousin, Lucas. Rosie isn’t complaining when Lucas lets her stay, especially when she’s been stalking him on Instagram for the last few months.

Then Lucas suggests he take her on a few experimental dates to kickstart her writing again. Lucas’ time in New York is running out so Rosie is set on keeping her silly crush under wraps. However, love always prevails… right?

If you’ve already read The Spanish Love Deception and love a good romance full of twists, laughs and love, this list will have something for you!

Are you looking for more books like The Spanish Love Deception? Have any recommendations that didn’t make the list? Let us know in the comments 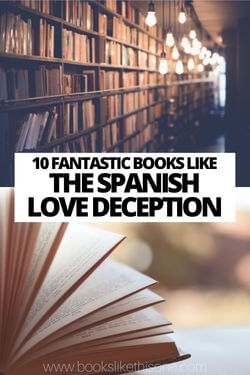