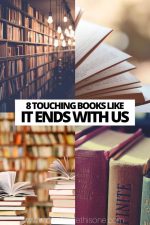 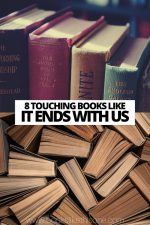 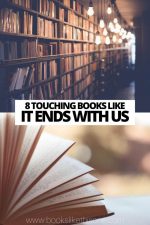 When reading books like It Ends with Us by Colleen Hoover, it’s easy to be swept away in a fantasy world that doesn’t include putting the bins out and scraping baked beans off your dinner plate.

This New York Times best seller knows how to lift its readers into a love high then put our emotions through the spin drier and still finish that last page with a sigh of satisfaction.

Lily didn’t have an easy childhood but it was made bearable by Atlas, her friend and first love.

Years later after graduating from college and moving to Boston to start her new business, Lily meets Ryle Kincaid – a gorgeous neurosurgeon who turns her life upside down.

Ryle is a little arrogant and stubborn with no interest in forming any kind of relationships but he begins making exceptions for Lily.

Lily is still hounded by questions about Ryle and what has made him adverse to finding love as their relationship builds and when Atlas reappears in her life; his presence threatens to change everything.

So, if you are in the mood for more books like It Ends With Us, then look no further.

Bright Side, by Kim Holden

Everyone has secrets but would yours ruin your life if it were known? This is the theme running through my first book suggestion.

Kate Sedgwick has endured hardship and heartbreak in her life but in this novel similar to It Ends With Us, she is determined not to be worn down; hence the title: Bright Side.

Kate is musically gifted but she’s also intelligent and funny. She isn’t convinced on the whole falling in love thing so when she moves to the small town of Grant in Minnesota and meets Keller Banks, she doesn’t expect to fall for him.

Keller has his own back-story of secrets and is not one for jumping in where love is concerned either.

This is story of life lessons and love that will have you laughing, swooning and wanting to read their story all over again.

Me Before You, by Jo Jo Moyes

Me Before You is a wonderful story of a steady journey towards love by two people who are thrown together in unusual circumstances. The book was adapted for film in 2016 and the sequels are titled After You and Still Me

Will Traynor was a vibrant adventurer who worked hard and played harder until he was involved in a motorbike accident which left him a quadriplegic. Now he can’t see any point in a life where he can’t do any of the things he loves. He’s angry and wants out.

This is where Louisa Clark comes in – she’s capable and funny and although has no experience as a carer, Will’s mother hires her to take care of him in the hope she can make him see that his life isn’t over.

They have a rocky start but Louisa’s gentle nudging eventually sees Will opening up to her.

If you are searching for books like It Ends with Us and still have your box of tissues to hand, then grab a copy of Me Before You.

When your box of tissues is empty but you still want more romance try The Kiss Quotient. This witty, steamy romance like It Ends With Us will put the smile back on your face and the thump back in your heart.

Stella Lane has Asperger’s; loves algorithms, and has a career that makes her more money than she can spend. She also has an aversion to acts in the romance area and likens French kissing to cleaner fish on a shark. If she is ever to have a relationship she will need to get used to the doing the things that couples do.

Her logical mind thinks the best way forward is to hire an expert in the field so she hires Michael Phan, a handsome escort who is working to pay his mother’s medical bills. He agrees to help her with her lesson plan and in time his kind patience has Stella looking at him in a whole different way.

You may not need a box of tissues for this one but keep some loo roll handy – just in case.

Another love built from friendship is the childhood romance between two of the characters in my next addition to this list of books like It Ends with Us, Love and Other Words.

Macy Sorensen and Elliot Petropoulos were childhood friends sharing their summers reading and discussing their favourite books, and sharing their dreams for the future. He was her ‘one’, the one who kept her heart whole after the death of her mother – and the one who then broke it into little pieces.

That was a decade ago; now Macy is a paediatrics resident who is about to marry a kind, stable older man. Her heart is safe – until Elliot appears back in her life.

Their story oscillates from the two timelines of their relationship and you’ll need to read it to find out why Macy has held onto her heart so tightly for the past decade.

Sometimes, love takes its sweet time and fate has to lend a hand. In this book similar to It Ends With Us, two very different people living in different countries take their chances with a long distance romance.

When Zara Khoury flies from Dubai to surprise Nick, her long-distance boyfriend who lives in Liverpool, she is devastated to find out there is no one of that name living at the address he gave her. He’s stopped answering her texts, too.

Heartbroken and humiliated, she may as well go home but manages to ram her second-hand car into the back of a brand new white BMW. The car owner, Jim Glover, is distraught; he had just won the car on a radio show and it’s the first good thing to happen to him in a very long time.

If you need a smile back on your face after all the sobbing from my other suggestions, give Never Saw You Coming a read.

My next book like It Ends With Us is a slightly different kind of romance.

When Sean’s wife, Catherine, dies, she leaves a box for him containing evidence of their life together: envelopes containing cassette tapes and photographs. There are twenty-nine envelopes in total and she has left instructions for him to open one a week.

At the start of the book, each chapter is headed with a description of the photograph and tape contents.

Catherine tells her story with honesty and love and confesses to having secrets from Sean which she reveals through the tapes. Sean is shaken by what his wife’s revelations about their life and their love and the things they never said; some of which begin to spill over into his current life.

In Things We Never Said, Alexander deals with the different approaches to dealing with grief from the side of Sean and their daughter, but don’t think this is just a depressing love story, there’s plenty of giggling to be had too.

Originally written in 1818, Northanger Abbey is an example of Gothic parody but this novel like It Ends With Us is still has romance at its heart.

Catherine Morland is a tomboy who loves Gothic novels. In her seventeenth year, she is invited by the Allen family to leave the ‘safe’ surroundings of her rural home in the country to join in the social season in the sophisticated town of Bath.

Her bond with Henry blossoms but Catherine’s morbid curiosity into the mysterious rooms at the gothic Northanger Abbey threatens to ruin their relationship.

Northanger Abbey was Austen’s first full-length novel and there is far too much to the story to do it justice here. Read it!

Often, the strongest bonds between people are formed when they are both considered to be outside the ‘norm’.

Eleanor & Park is set in the eighties where a chubby sixteen-year-old girl (Eleanor) with a horrendous home life meets a short half-Korean boy called Park on the school bus.

Although it’s not love at first sight, Park and Eleanor have interests in common and he thinks she’s one of the smartest girls in their class.

Eleanor lives with her four siblings, her mother and abusive stepfather and when she calls the police one night after hearing gunshots, her stepfather convinces them she is not telling the truth. Eventually, Park drives Eleanor to stay at her uncle’s house.

Park sends letters to Eleanor but she doesn’t respond but he can’t forget her and finally, six months later, he receives a postcard from Eleanor with three words written on the back…

So, if you enjoyed It Ends With Us and are searching for more touching stories to melt your heart, then put Eleanor & Park on your wish list.

Have you read this coming-of-age novel already? Have a look at our list of books like Eleanor & Park!

Real romance is not always birdsong and heartbreak; there’s often a period of getting to know one another. I hope these suggestions of books like It Ends With Us have enough range of reality and fantasy to keep the battery on your e-reader working hard!

Are you on the hunt for more books like It Ends With Us? Have any recommendations that didn’t make the list? Let us know in the comments! 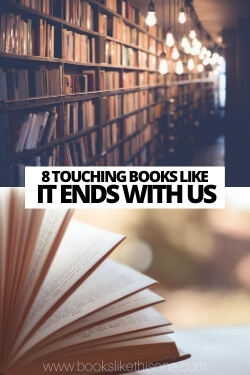