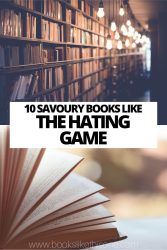 If you have also fallen madly in love with this book, you must be wondering if you will ever find other books like The Hating Game again! The book had everything you would want from a romance novel and more.

In The Hating Game, you have Lucy, who is charming and loved by all, and then you have Joshua, the attractive but standoffish coworker. Sharing an office without killing one another is a full-time job of its own.

Add in their silent games, along with the new promotion opportunity and there is no telling who will survive. With their fight to the top, the saying “it’s a fine line between love and hate” has never rung more true.

While the bar is set extremely high, the following books come very close to The Hating Game with a similar enemy to lover appeal.

When searching for books similar to The Hating Game, you will come across The Unhoneymooners.

In this book, Olive feels like she is infinitely unlucky while her twin Ami has all the luck in the world. However, Olive’s luck changes at her sister’s wedding when everyone gets food poisoning except for herself and the best man Ethan, who she hates.

With an all-expenses-paid and nonrefundable honeymoon up in the air, Ami urges her to go live it up in Hawaii. There’s a small catch – Ethan is also going and they have to pretend to be newlyweds.

Somewhere along the pretending and fun in paradise, sparks start to fly, leaving the couple imagining life together after their vacation.

The continuous road to other books like The Hating Game will lead to Beach Read.

Two authors, with nothing in common but writer’s block, spend their summer living in beach houses right next to each other.

January is a bestselling romance writer, who stops believing in love and Augustus is a literary fiction writer who hates happy endings. They decide to put their differences aside and help each other with a summer challenge to get back in the writing groove.

While January and Gus start out with a strong dislike for one another, they slowly create a love story of their own.

Chloe is working on her MBA and is interning for a big media company that Bennett’s family owns. Bennett comes back to Chicago from working in France and becomes Chloe’s rude boss, who she despises.

However, one late night, they let their anger and irritations out and get down to business in the office. With the games they play, Chloe names Bennett the Beautiful Bastard.

The love and hate relationship, which is similar to The Hating Game, continues until they both can admit they want more than just hooking up.

In The Kiss Quotient, we follow the life of Stella, a mathematician who works in Silicon Valley and has Asperger’s. She needs helps with dating and connecting so she hires a male escort named Michael.

Stella has a list of things she wants to learn, such as how to kiss and be intimate with guys. Michael, who is Vietnamese and Swedish, is only escorting to help his family out of debt.

His goals quickly change when he starts spending more time with Stella, not for the money but because he likes being with her.

In The Ex Talk, Shay loves her job as a producer for a public radio station, where she has been for almost a decade and is underappreciated by her boss. When she suggests a new show about exes talking, she is shocked that it is approved and that her boss wants her to co-host it with the new guy she can’t stand.

Shay and Dominic have to pretend to be exes and give relationship advice on air, even though they have never dated. Both value honesty and radio, but it’s either lie or lose your job.

While listeners quickly fall for the two hosts, with many wanting them to get back together, the show becomes one of the top shows in Seattle. Things start to get even messier when Shay and Dominic start seeing each other for reals but still have to keep up the deception.

This aspect of hiding their true feelings is common in books like The Hating Game. When the truth is thrown in the mix, both their careers and a possible love story are put on the line.

The Duke and I, by Julia Quinn

In The Duke and I, you are transported to the Regency era, where girls need marriage to be someone. As soon as girls like Daphne become of age, the men of their family must find them an eligible bachelor to marry.

Daphne does not feel ready to marry some old or boring man so she and the Duke of Hastings, Simon, agree to fake a courtship.

At first the two butt heads a lot, since they are both stubborn but soon enough they seem to enjoy each other’s company. What starts off as a way to get through the wedding season may turn into much more.

When Emily moves back home to help her sister recover from a bad car accident and to take care of her niece, she does not expect to be sent back in time.

She is forced by her niece to volunteer for the Willow Creek Renaissance Faire for the summer and is surprised when she starts to enjoy it.

One thing she doesn’t enjoy is working with Simon who is in charge of the fair and who hates change. This is why Emily and Simon can’t be more different.

Emily becomes intrigued by Simon when she notices that he’s a completely different man when he’s in costume. Simon becomes much more charming and even flirts with Emily.

As she starts to fall for him, Emily has to decide whether she’s prepared to handle both Simons in Well Met.

The Trouble With Hating You, by Sajni Patel

In The Trouble With Hating You, Liya is a biochemical engineer who is happy to be independent, single and in no rush to change that. When she’s invited over for dinner at her parent’s house, she feels betrayed to find out they also invited someone she could potentially marry.

Liya and Jay start off on the wrong foot when he sees her running away from the dinner. While both parents have continued their Indian traditions, Liya and Jay don’t see the need for arranged marriages, especially when they don’t get along.

Jay turns out to be the lawyer sent to save Liya’s company from getting shut down. As their professional and private lives continue to intertwine, they both have to decide whether they’re ready to give love a chance.

Kiss My Cupcake, by Helena Hunting

In Kiss My Cupcake, Blaire has worked tirelessly baking and planning the launch of her unique cupcake and cocktails shop. What she didn’t anticipate was the hot bar owner Ronan from next door, who comes in swinging with his axe throwing activities and loud music.

The two go head to head, similar to The Hating Game, to attract the most business and to win a social media challenge, but what they also attract is each other.

When a big established business opens up across the street, Blaire and Ronan call a truce to work together against the enemy.

As they get to know each other, sharing drinks and cupcakes, the more they like what they see. The two have to decide whether mixing business with pleasure creates a delicious cupcake or not.

The Honeymooner, by Melanie Summers

Libby has lived her life by planning every second of it. From her career to her relationship to her wedding and everything in between.

The Honeymooner’s main character is a workaholic and has planned her honeymoon to a destination that promises to advance her career in mergers and acquisitions.

She believes she is about to marry the perfect guy, but on the day of her wedding, her fiancé calls it quits. She put all her energy into getting the resort deal and still goes on her honeymoon to Paradise Bay alone.

The owner of the resort, Harrison, reminds me of Joshua from The Hating Game. Harrison is not so welcoming because he doesn’t want to give up his home, just like Joshua wasn’t a fan of the company merger. Instead of working against each other, they start to work together to figure out how to save the resort.

In the process, Libby finds true love and the better version of herself but is left with the decision of whether to stay in paradise or run back to her unfulfilling life.

This list of books like The Hating Game is filled with stories that will make you root for both characters, even when they plan to destroy one another. The books also make you hope that the characters find their way to each other and have a happily ever after. Like most relationships, it’s not always perfect but you put away your hating game and choose love.

Are you looking for more books similar to The Hating Game? Have any recommendations that didn’t make the list? Let us know in the comments! 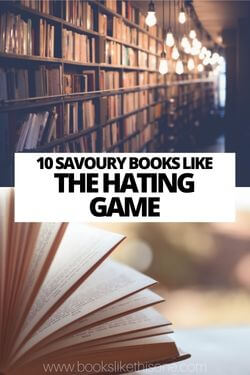