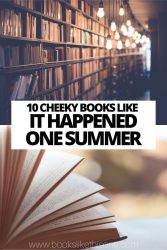 Take a break from everyday drama to find your passion with books like It Happened One Summer, just like Piper took a timeout from being a rich party girl to temporarily move to Westport where her father was from.

In this town, her late father, who died at sea, is a legend and people even say he was Westport. Now that Piper is forced to stay the summer there, she can learn more about her father and what she wants to do with her life. She may even learn a thing or two about love from a specific fisherman captain.

Continue to find more books to enjoy after you’ve finished reading It Happened One Summer.

10 Books Similar to It Happened One Summer

As the follow-up book to It Happened One Summer, in Hook, Line, and Sinker we get to learn more about Piper’s younger sister Hannah and Brendan’s best friend, and fellow fisherman, Fox.

Hannah and Fox met the summer the girls lived in Westport for the first time and after a rocky start, they bond over music. They remain good friends even when Hannah goes back to LA and continue texting each other.

Now, six months later, Hannah returns to Westport after convincing the movie director she’s working for to film there and to save the company some money, she decides to stay with Fox.

Fox’s player reputation follows him around since high school but he feels a deeper connection with Hannah than he has ever felt before. Will the two be ready to take the leap and dive into a romantic relationship?

In the hopes of helping her best friend surrender to love and happiness, Olive not only kisses but starts fake-dating a very much disliked Stanford professor.

Olive and Adam agree on a fake-dating deal that will benefit both of them. Because Olive is in the third year of her PhD program and is not one of Adam’s students, it’s no problem for them to date but it will help Adam show the school that he’s not a flight risk since he’s settling down.

Characters in books similar to It Happened One Summer often fall for the person they least expect and Olive is not an exception.

Having heard all the horror stories students shared about Dr Carlsen, or Adam, Olive had no desire of wanting to get to know him but sometimes the heart wants what it wants.

Soon she will see that some mean professors might be warmer than they let on and The Love Hypothesis she made might need a second look.

Misha and Ryen have been pen pals since fifth grade and now that they’re both about to graduate high school they consider themselves best friends. But they still haven’t met in person.

That is until the night Misha’s life is changed forever. When he’s at a party fundraiser for his band, he hears someone call a girl “Ryen” and figures out that this is the girl he’s been sharing everything about himself for years but she doesn’t know it’s him because he doesn’t tell her.

Then for months Misha just stops writing and Ryen feels so lost and worries that something happened to him. It doesn’t help that a new guy at school named Masen keeps messing with her but when she starts to feel something more for him, she also feels guilty for liking someone other than Misha.

Similar to Piper and other characters in books like It Happened One Summer, some characters in Punk 57 have a version of themselves they show the world but they hide who they really are fearing others won’t like the real them.

As Ryen slowly allows herself to be real with Masen, will she finally be able to give up hope of receiving a letter from Misha?

The Chase, by Elle Kennedy

When Summer is kicked out of school for an incident involving fire, she transfers to Briar and moves in with three of her brother’s former hockey teammates.

Ever since she met him, she’s been intrigued by Fitzy. Especially when he doesn’t seem to notice her – and it’s extremely difficult to ignore Summer.

Similar to Piper in It Happened One Summer, Summer is into fashion and loves to speak her mind but some people just don’t get her.

Although convenient and often fun, Summer will have a new challenge living with hockey players when the one she likes wants nothing to do with her and the one she doesn’t like seems to like her too much. But for Summer, The Chase is on!

The One Night, by Meghan Quinn

Imagine being recently divorced and hitting the town with your parents as wingmen. Unfortunately for Cooper, this is exactly what he has to deal with when his parents force him to get out there and find someone.

But somewhat luckily for Cooper, they only go to one bar where they find an old family friend who could be perfect for Cooper.

The wingmen/parents smoothly leave Cooper with Nora after seeing how quickly they get lost in conversation.

When the two leave together, they make a slight detour to Nora’s bakery and from there The One Night can only get sweeter.

After the gap year she negotiated with her parents, in order to be able to grow her business, Mackenzie has to keep her side of the deal and attend college.

While her parents have her life all planned out, wanting her to get a degree only to run a charity after she marries her equally wealthy, long-term boyfriend, Mac wants more out of her life. We see a similar dilemma in other characters from books like It Happened One Summer, where it’s hard to fight others’ expectations.

So when she meets Cooper, a bad boy local, she starts to learn more about herself and she can feel the future she wants getting closer.

However, Cooper might not have the best intentions in mind for his friendship with Mac, but it’s up to her to find out if she’s ready to break free from her Good Girl Complex.

Written by the same author as It Happened One Summer, Window Shopping follows a similar theme of giving people a second chance and accepting them for who they are.

Stella was recently released from prison, where she’s been for the last four years, and is hoping for a fresh start. Her dream is to become a window dresser but she’s worried no one will hire her because of her criminal record.

That is until she is completely honest about the Vivant window display and unknowingly gives her opinion to the store’s general manager. Luckily for her, he respected her opinion and when she applies for the position, he hires her.

When Stella accepts the job she’s worried about others finding out about her past but the manager Aiden assures her that she’s not defined by past mistakes. Not only are her window display speaking for themselves but Stella might finally be ready to let someone in.

Don’t You Forget About Me, by Mhairi McFarlene

Georgina was not only fired from a gritty restaurant but she also finds her boyfriend in bed with another woman on the same day.

Now she has to find a job with a broken heart but it seems that luck is on her side again because she gets hired as a barmaid at a new pub.

However, she didn’t know that the pub belongs to Lucas, her first love from school who was also the first boy to break her heart. For this job, Georgina can keep it professional even though Lucas is even more handsome than ever.

What first felt like a continuous rain of bad luck may actually turn into just the push Georgina needs to follow her dream career and the possibility to rediscover true love in Don’t You Forget About Me.

Kiss Me Not, by Emma Hart

Around town, Halley is known for being the raccoon lady and the reigning annual kissing booth champion for the last four years, and she’s equally proud of both titles.

Now that she has competition at the kissing booths in the form of her longtime crush Preston, who is also her best friend’s brother, she’s ready to fight back harder.

Her only problem is that while they both get plenty of activity, she can’t help wishing that Preston would line up at her booth to kiss her.

Similar to Piper in It Happened One Summer, Halley is unapologetic about who she is and determined to reach the goals she sets. She also knows that some people consider her to be weird but she doesn’t care.

As Halley and Preston continue to compete by kissing long lines of people and slowly get to know each other more, some rules are bound to be broken in Kiss Me Not.

99 Percent Mine, by Sally Thorne

At age eight, Darcy found the love of her life but like with most things when you have a twin, Jamie called dibs on Tom first to be his best friend.

Darcy has done well for herself as a photographer but similar to other characters in books like It Happened One Summer, she craves a more stable and fulfilling life.

So when Darcy and her brother inherit their grandmother’s cottage, Darcy plans to stick around for the remodelling to make sure it ends up just how her grandma would’ve wanted. As add bonuses, Tom’s new company is in charge of the renovation and he is finally single.

While Darcy knows she wants Tom, will she be ready to give up her life of travel and battle against her brother to win Tom’s full heart in 99 Percent Mine?

It’s hard not to adore the main characters of books similar to It Happened One Summer. As the readers, we get to go on the journey with the characters to find out how amazing they are and see them find happiness. So grab a book from this list and go on the ride with us.

Are you looking for more books like It Happened One Summer? Have any recommendations that didn’t make the list? Let us know in the comments! 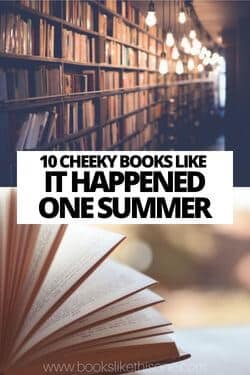