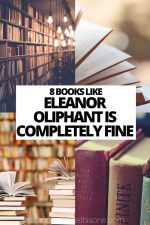 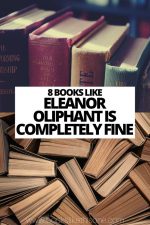 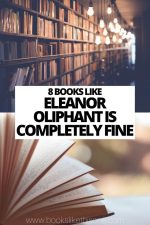 Searching for more books like Eleanor Oliphant is Completely Fine? You’ve come to the right place.

Eleanor Oliphant is Completely Fine was the recipient of the 2017 Costa Debut Novel Award. It masters the telling of a story through the eyes of a unique protagonist and is able to pace the reveals of Eleanor’s traumas well, without ever losing the attention of the reader.

Eleanor Oliphant is a loner – she works in an office but has no friends as she doesn’t understand social cues, and when she returns home each night she drinks a whole bottle of vodka and dreads speaking to her mother on the phone. One day, Eleanor gets it into her head that she is going to marry a singer she admires and begins to build this fantasy into her everyday life.

When she and a colleague help a man who’s been in an accident, Eleanor suddenly gains a friend, a real one this time, and her world begins to expand with the introduction of this person in her life. But Eleanor must deal with her inner demons before she can truly begin to live her life, and truly be completely fine.

The following novels all deal with the same theme – loneliness. Some of the protagonists below are not as isolated as Eleanor, but all of them suffer from being loneliness at one point or another.

The Edible Woman, by Margaret Atwood

When Margaret Atwood would have published The Edible Woman in 1969, it was shocking for the time it was written in.

The novel follows Marian, who is living a very stable life – she works in an office, makes money, has a good respectable boyfriend, and from the outside her life is perfect. However, when Marian becomes engaged to her boyfriend Peter, in quite unromantic terms, she begins to lose herself, figuratively and literally.

Marian has suddenly completely lost her appetite, finding herself disgusted by food. The story is largely metaphorical in what it says about women who are trapped, following a conditioned life they’re led to believe they want, when in fact this isn’t always true.

Like in Gail Honeyman’s novel and other books like Eleanor Oliphant is Completely Fine, Marian seems to unconsciously punish her body because she is so unhappy with her circumstances in life, as a way to sabotage the path she is on.

A novel that won’t be for everyone, Atwood deals with the difficulties of prescribed femininity perfectly in The Edible Woman, in a time people would not have wanted to read about it.

Lally’s novel, Eggshells, was the winner of the 2018 Rooney Prize and examines a protagonist very similar to Honeyman’s Eleanor.

Vivian has always been considered unusual – she lives in a home that was left to her by her Aunt, she’s shunned by her sister who appears to have everything, the husband and children, and Vivian, like Eleanor, just needs a friend.

While Eleanor’s friendship with Raymond comes around more organically, Vivian takes this into her own hands by advertising for a friend, who must be called Penelope.

Much to her surprise, someone answers her ad, who is called Penelope and wants a friend too. This story is not plot-heavy, but it is written beautifully and just as in other books like Eleanor Oliphant is Completely Fine, it examines the theme of loneliness perfectly.

Molly Fox’s Birthday became one of my favourite novels a couple of years back – its examination into characters is exquisite; the narrator remains unnamed, as she tells the story of her life, and that of her friends, Andrew, who she met in college, and Molly, a celebrated actress who she is house-sitting for.

The protagonist is trying to overcome writer’s block and finds herself reminiscing on her own life, the mistakes and regrets she has, and what has led her to Molly’s home, alone on this very day, Molly’s birthday.

The narrator is clearly lonely and she wonders if there was anything she could have done to prevent that, although it is far too late to do anything about it now. She is not quite like Eleanor or Vivian, in the sense that she’s a loner – she seems rather to have chosen to be alone and must now come to terms with her decision.

Like in Eleanor Oliphant is Completely Fine, there are moments of deep remembrance, that give insights into the protagonist’s life, and why she has come to live the way she does. A wonderful novel, nominated for the Orange Prize, Molly Fox’s Birthday deserves to be read by everyone.

Wild: From Lost to Found on the Pacific Crest Trail, by Cheryl Strayed

Wild is the memoir by Cheryl Strayed, written in 2012 and adapted into a film in 2014 starring Reese Witherspoon and Laura Dern. It tells the true story of Cheryl, who completely loses herself at the age of 22 when her mother is diagnosed with cancer and dies soon after.

Cheryl’s relationship with her husband breaks down, and as she turns to other men and drugs, she finally hits a low enough point that she believes she needs to make a change. That change takes the form of a 1,100-mile hike on the Pacific Crest Trail, though Cheryl has no prior experience in hiking, particularly not a hike of this magnitude.

The memoir tells the story of how Cheryl healed herself, and the difficulties she faced on this journey.

Just as in books similiar to Eleanor Oliphant is Completely Fine, Cheryl finds herself at rock bottom and in desperate need of healing, without many good people around her to help her do that. Cheryl resolves to recover on her own terms, leading to this incredible true story about resilience and trauma.

One of Atwood’s shorter novels, Surfacing is the story about a woman who has slowly become unhinged, the reasons for which aren’t entirely clear until near the end. Our protagonist is never named, much like in Molly Fox’s Birthday, but she travels to Quebec in search of her father, who has been missing for many years.

She goes with her lover and a couple she is friends with, to a remote house where she spent her childhood. As the novel progress, the protagonist becomes undone, with her past traumas completely overriding her sense of self.

Like in Eleanor Oliphant is Completely Fine, separation and isolation are major themes in Surfacing – though the protagonist starts her journey off with other people, she begins to lose people as the plot continues, and her past terrors become more apparent.

Queenie is a novel that tells a very modern story about isolation and loneliness. It begins comedic, and for the first couple of chapters, it seems like that’s all it is going to be.

Queenie works for a newspaper, is in her mid-twenties and has just suffered from the miscarriage of a pregnancy she wasn’t aware she was having. She’s just split up from her boyfriend, who she lived with, and is waiting for him to come around and want to be with her again.

She’s self-deprecating and gets herself into countless unfortunate situations, but the novel really comes into its stride when it becomes apparent that Queenie had a traumatic childhood that she has not healed from, and that leads her to make disastrous decision after disastrous decision, in the hopes of feeling less alone.

Queenie is eccentric and funny, a little bit like Eleanor, and just as in Eleanor Oliphant is Completely Fine, she hits rock bottom and has to learn how to heal and love herself if she ever hopes to love someone else.

All We Shall Know, by Donal Ryan

Donal Ryan’s masterful novel All We Shall Know was shortlisted for the Irish Book Awards for Novel of the Year in 2016, and it is hardly a wonder why. From the very first pages, we are introduced to Melody Shee, a 33-year-old teacher who has gotten pregnant from a dalliance with a 17-year-old student she was tutoring.

Melody is married, to Patrick, and their marriage effectively falls to pieces at this revelation, although it was on the rocks long before Melody’s pregnancy. Now alone, Melody befriends Mary Crothery, a Traveller girl and gets mixed up with the politics of Traveller relations, more than she bargained for.

The novel very much shows how Melody has completely lost herself, and lost touch with reality, leaving her isolated from the life she was leading before her marriage began to sour, and she became pregnant.

Just as in books like Eleanor Oliphant is Completely Fine, we must watch the protagonist completely fall apart, before we can hope to see them come back together.

From the author of Eat, Pray, Love comes City of Girls, the story of Vivian, and how she came of age during WWII in New York. Vivian is a talented seamstress, and instead of going to Vassar University, she is sent by her parents to live with her Aunt Peg at her dilapidated playhouse, The Lily.

It is here that Vivian receives her introduction to womanhood, in more ways than one, and after befriending the showgirl Celia, she spends her days working in the playhouse and her nights exploring New York City. However, when a personal scandal strikes, Vivian’s new life is fractured, and she must face the world with the mistakes she has made on her conscience.

Like in Eleanor Oliphant is Completely Fine, just as Eleanor suffers, Vivian does too – the story is told in retrospect, with Vivian as a 95-year-old woman, reflecting on her mistakes, and how she came to absolve herself of those mistakes.

Novels such as Eleanor Oliphant is Completely Fine are entirely made by their protagonists. As the reader, we become so invested in their lives and their struggles, we cry when they cry, we laugh when they laugh. This is certainly not something that is required for a novel, but it’s what makes these as good as they are.

Are you on the hunt for more books like Eleanor Oliphant is Completely Fine? Have any recommendations that didn’t make the list? Let us know in the comments! 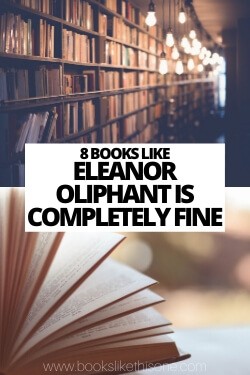