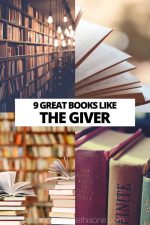 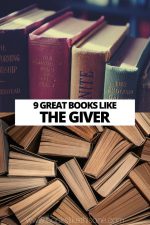 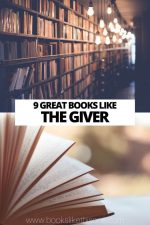 Lois Lowry’s 1993 young adult novel, The Giver examines a world where no person feels pain or emotional strife and a young boy called Jonas is tasked with holding all of the world’s memory before this has taken place. Consistently considered to be one of the greatest books in publication for young people and certainly the precursor for the “young adult dystopian” novel trend. A winner of many accolades, The Giver also frequently finds itself on the American Library Association’s list of most frequently challenged books, as it has been banned from libraries and removed from school reading lists on numerous occasions. Despite the controversy, it continues to provoke deep thinking since it’s publication over 25 years ago. If you’ve enjoyed this iconic novel and are looking to read more books like The Giver, then have a look at these nine suggestions.

If you liked The Giver, then you will almost certainly like Lois Lowry’s second instalment in her Giver quartet, the 2000 novel Gathering Blue.

Set in the same universe as The Giver, Gathering Blue follows the protagonist, Kira, a young, orphaned woman who was born with a deformed leg. Because people with disabilities are usually left for dead in this society, Kira lives a severely marginalised life.

To prove her worth to society and to avoid being taken to “The Fields” and left for certain death, Kira uses her gift of embroidery to make robes of different colours for one of the higher-ups in the society. Through forged friendships of some other children her age, Kira and her friends begin to learn the secrets of the society that they live in and that it isn’t the utopia that it claims to be.

Upon its publication, Gathering Blue spent some time on the New York Times Bestseller List and it is an excellent choice if you’re looking for books like The Giver.

Another of the most critically acclaimed young adult dystopian novels, Suzanne Collins 2008 novel The Hunger Games is an obvious choice if you’re looking for books similar to The Giver.

Set in a post-apocalyptic world that was once the USA, the novel is told from the perspective of 16-year-old Katniss Everdeen who lives in the low-income, working-class area of the county called District 12. In an effort to appease the totalitarian government and repent for a rebellion some decades in the past, two “tributes,” aged from 12-18, from each of the 12 districts in the country are required to compete in a televised battle royale known as The Hunger Games.

Taking cues from other works such as Shirley Jackson’s haunting short story The Lottery and the myth of Theseus and the Minotaur (if you’re interested in reading books with a basis in Greek myth, check out our list of books like Circe and The Song of Achilles!), The Hunger Games is an excellent choice for readers looking for something like The Giver to read next.

The Maze Runner, by James Dashner

The first instalment of the series, James Dashner’s 2009 novel The Maze Runner is a great choice for those who are looking for books like The Giver.

The novel follows Thomas, a young man who, at the beginning of the book, wakes up with no recollection of his previous life in a mysterious world known as The Glade. This world, run by teenagers much like Thomas, is surrounded by impenetrable walls and adjacent to an ever-changing maze filled with deadly creatures.

The novel follows the group of children as they plot their escape and strive to learn more about this mysterious world they live in. It is a great novel to read in you’re looking for more books similar to The Giver, while also drawing influences from classic books like Lord of The Flies.

Uglies, a 2005 dystopian novel is another great young adult choice if you’re looking for books like The Giver.

This novel, the first of four instalments (with more planned in the future), is set in a world where everyone is born “ugly” and is given cosmetic surgery at the age of 16 in order to become “pretty.”

Based three hundred years in the future, society relies on a social hierarchy based solely on the assigned beauty. The novel follows Tally Youngblood, a young woman approaching her 16th birthday and eagerly awaiting her pretty operation. Up until this operation, she is considered to be an “ugly.” However, before her operation, she learns some new information about how the government controls its citizens with this operation and eventually sets off to find a group of rebels in a community of “uglies.”

Uglies examines society’s obsession with beauty while also being a compelling book to read for teenagers. It is also a good choice if you’re looking for something similar to The Giver.

Never Let Me Go is a 2005 novel by English novelist Kazuo Ishiguro is an excellent choice for adults looking for books like The Giver.

Set in an indeterminate time in the future or alternate universe where most major world diseases have been eliminated and human life expectancy is at an all-time high, the novel follows Kathy H as she grows up in a seemingly idyllic rural English boarding school. The narrative progresses as she fosters friendships and relationships with her peers and goes through general trials and tribulations of growing up.

The book, written as though everything is normal, sets up for a large reveal in why Kathy’s and her fellow classmates are inherently “special” and call to question the morality of and of finding a cure for the greater good of society and the toll it takes on the faceless few.

Though certainly an adult novel, Never Let Me Go is an excellent book to read if you want something similar to The Giver, as it really calls to question the aspects that make any society “great.” The book was also turned into a feature film in 2010.

If you’re an adult looking for books like The Giver then picking up a copy of Margaret Atwood’s 1965 novel, The Handmaid’s Tale may be a good idea.

This haunting work of speculative fiction is set in a world a few years in the future, where the US government has been overthrown by a radical religious/political group known as the Sons of Jacob. From the overthrow, the USA has been dissolved and, in its place, a tyrannical theocracy known as the Republic of Gilead is established.

In Gilead, women have been stripped of all of their previous rights — they are not allowed to read, hold jobs, handle money, or be free in any way. A hierarchical society has been set up where every citizen of Gilead has his or her own role.

Set during a time where birth rates and fertility have been in decline, fertile women have been enslaved and are used as “handmaids” in order to be subjected to rape and bear children for their masters.

This haunting tale is told entirely from the perspective of Offred, a handmaid, and it is a chilling read definitely only suitable for adult readers who were fans of Lois Lowry’s titular novel. Today The Handmaid’s Tale is, perhaps, best known for the Hulu series of the same name, however, the novel is an excellent and important choice to add to any reading list.

Ray Bradbury’s 1953 novel Fahrenheit 451 is a great option for those who enjoyed the dystopian aspect of The Giver and want to read a classic novel which uses similar tropes and ideas.

The novel follows Guy Montag, a “fireman” living in what is believed to be the USA sometime in the future. His job as a fireman requires him to burn books as independent free thought are highly discouraged and full-length books are banned. Citizens are instead subjected to a constant stream of superficial media and have numerous screens throughout their homes and public spaces.

Much like in The Giver, Fahrenheit 451 follows Montag as his perspective shifts from believing that he lives in a utopia until he begins to realise the harms of totalitarianism and censorship. Originally written to be critical of the culture of McCarthyism in 1950s America, Fahrenheit 451 has prevailing themes that are still very much relevant today.

No list of dystopian books like The Giver would be complete without a mention of Aldous Huxley’s 1931 classic, Brave New World. Though written for adults, this novel is suitable for teenagers as well as grown-ups who are interested in exploring the dystopian genre further.

The novel follows protagonist Bernard Marx and covers many of the same tropes as other dystopias mentioned in this list. Set in the year 632 AF (After [Henry] Ford), which is believed to be the year 2540 in our calendar, society has merged into something of a utopia that most but Bernard and a select few others fail to realise is corrupt.

Much like the other books on this list, Brave New World examines themes like the importance of independent thought and action and the power of individuality.

If you’ve already read this title, check out our list on more books like Brave New World!

Appropriate for some older teenagers and every adult that read The Giver, Orwell’s novel (written in 1948 and published in ’49) examines what he thought London might look like in the year 1984.

The world is under complete totalitarian rule and in a state of perpetual war. The governing body is known as “The Party” and the head of state is the mysterious “Big Brother,” who is known to always be watching you through screens and surveillance cameras in every aspect of daily life.

The novel follows Winston Smith, a mid-level government employee who begins to engage in a forbidden sexual relationship. Throughout this relationship, Winston begins to question the nature of the government and the role that it plays in his life. His questioning of the governmental system results in his eventual imprisonment where we learn about the secrets of this oppressive regime.

The novel explores themes like the questioning of authority, human compliance and the power of individualism. Though more adult and certainly darker than The Giver, it is a great option for anyone wanting to read more in the dystopian genre.

Finding books like The Giver doesn’t have to be difficult, whether you’re a young reader or an adult curious to explore more of the dystopian genre!

Are you looking for books like The Giver? Do you have any additions that didn’t make the list? Let us know in the comments! 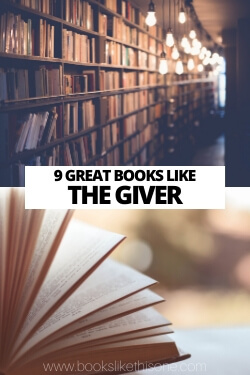