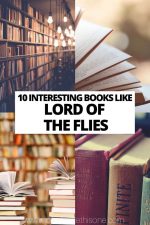 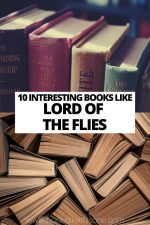 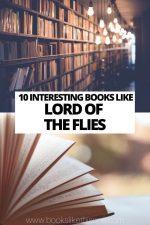 William Golding’s 1954 novel about the society and descent into mayhem created by a group of young boys stranded on a desert island is one of the most consequential works of literature from the 20th century. However, if you’re looking for more books like Lord of the Flies, it can seem like a daunting task.

Whether you wish the storyline of Jack, Ralph, Piggy, Sam and Eric, and Simon ended differently or you wish there was just a bit more feminine energy included in this very male-dominated society (it was written in the ’50s…), then take a look at this list of 10 great works of literature similar to Lord of the Flies that is sure to provoke your mind and leave you wanting to read more!

One Flew Over the Cuckoo’s Nest, by Ken Kesey

Ken Kesey’s 1962 novel set in a psychiatric hospital is perhaps best known for the 1975 film adaptation starring Jack Nicholson, however, it is also a fantastic read if you’re looking for books like Lord of the Flies.

One Flew Over the Cuckoo’s Nest follows the story of Randle McMurphy, a convicted felon who faked insanity to avoid being sent to prison, as he is committed to a psychiatric ward. The novel follows McMurphy as he antagonises the tyrannical head nurse, Nurse Ratched.

The novel follows similar themes like Lord of the Flies including examing power dynamics and leadership. Not only is it a great addition to your reading list if you are looking for books like William Golding’s seminal work, One Flew Over the Cuckoo’s Nest is also a great underrated classic that everyone should read at least once in their lives.

A Clockwork Orange, by Anthony Burgess

Another novel that is better known for its film adaptation (directed by the incomparable Stanley Kubrick), Anthony Burgess’ 1962 dystopian novel A Clockwork Orange is a great choice if you’re on the hunt for books similar to Lord of the Flies.

This bizarre and dark novel follows 15-year-old protagonist Alex, a delinquent and violent young man living in a dystopian society sometime in the not-so-distant future. The novel, divided into three parts, follows a different part of Alex’s life as he comes of age.

Alex becomes a de facto leader of a group of violent boys and deals with the consequences of his actions in a society that is much different from the one we live in today. It deals with similar themes as in Lord of the Flies including authority, leadership, and anarchy and is a great addition to any reading list.

If you enjoyed Lord of the Flies because of the dynamic of young people trapped in an inescapable situation and the anarchy that ensues, then The Hunger Games is also an excellent choice for you.

Set in a dystopian future, The Hunger Games follow Katniss Everdeen as she is selected for an annual televised event that pits 24 children between the ages of 12-18 in a battle royale, it explores similar themes to that of Lord of the Flies. One distinct difference, however, is that the protagonist of this novel is a female and William Golding’s novel is completely male-dominated.

The novel, which was turned into a wildly successful film franchise starring Jennifer Lawrence, follows themes like Lord of the Flies including compliance, rebellion, and the effects of when young people appear to be in charge.

If you’re looking for some more modern books like Lord of the Flies, then The Hunger Games (and it’s sequels Catching Fire and Mockingjay) is a great addition to your reading repertoire.

As one of Kurt Vonnegut’s seminal works, Slaughterhouse-Five is an excellent choice if you’re on the hunt for more books like Lord of the Flies.

This 1969 novel follows Billy Pilgrim as he becomes “unstuck in time” and (out of order) takes you through his experiences as a POW in the Second World War and as he witnesses and survives the devastating firebombing of Dresden while, somehow simultaneously, he is also kidnapped by aliens from the planet Tralfamadore and becomes an exhibit in one of their zoos.

While Slaughterhouse-Five is certainly very different from Lord of the Flies, it also explores many of the same themes as the latter novel. Most notably, it examines the effects of the exposure to violence has on young people and the devastating consequences of WWII (as it is implied in Lord of the Flies that the boys on the island were in the process of being evacuated from the Blitz).

All in all, if you looking for a great classic read similar to Lord of the Flies, then Slaughterhouse-Five is a fantastic choice.

Like the previous dystopias on this list, Fahrenheit 451 is set in a not-so-distant-future (believed to be the year 1999) in a society in which the totalitarian government heavily censors most of the reading material that is available to the general public.

The novel follows Guy Montag is a fireman or a person whose job it is to burn books. In fact, the novel’s full title is Fahrenheit 451 — the temperature at which book paper catches fire.

Throughout the novel, the reader watches Guy as he struggles with the aspects of his job and begins to question the totalitarian regime in which he lives, especially after witnessing a woman who would rather die than see her books burned, a suicide attempt of his wife (and subsequent medic ambivalence), and the disappearance of a neighbour who was actively questioning the government.

Though it has been frequently challenged, Fahrenheit 451 is a notable anti-censorship and critique of the modern obsession of mass media and it is an excellent choice for readers looking for similar books to Lord of the Flies.

As one of George Orwell’s most pivotal works, Animal Farm is an excellent choice for those looking for books like Lord of the Flies — especially if you’re interested to see how a seemingly perfect society can so quickly descend into madness.

First published 1945, Animal Farm is a perfect allegory of the events leading to the 1917 Bolshevik Revolution and the subsequent establishment of the Stalinist USSR. The novel follows a farm of animals as they plot to (and eventually) overthrow the human owners and establish a communal farm in which “all animals are equal” and they work for the greater good of their society.

However, things quickly take a turn for the worse as power dynamics come into play and propaganda influences the minds of the animals on the farm. Soon, their utopian communal society descends into one that is worse than what they had before, where few animals are quite well-off and many more suffer because of it.

One of the greatest works of 20th-century literature and an excellent read if you are curious about the power dynamics of the former Soviet Union (under Stalin), Animal Farm is also a great choice if you’re looking for a novel like Lord of the Flies.

The Crucible, by Arthur Miller

If you’re sick of reading novels but want an interesting read similar to Lord of the Flies, then Arthur Miller’s 1953 play The Crucible is a fantastic choice for you!

This Tony Award-winning play, written as an allegory to McCarthyism in the United States, is set in the Massachusetts Bay Colony in 1692-93 during the Salem Witch Trials.

The play follows the citizens of the town as a group of girls, led by antagonist Abigail Williams, accuse certain members of their Puritanical, theocratic society of witchcraft. Such accusations inevitable led to the death of 19 people involved in the trials.

The play examines themes like revenge and compliance, along with leadership dynamics in a primitive and isolated society.

Considered to be one of Miller’s most consequential works, The Crucible is a seminal piece of American literature and an excellent choice for those looking to read something like Lord of the Flies.

The Lottery, by Shirley Jackson

Another fantastic, if not short, read for those looking for works of literature similar to Lord of the Flies is Shirley Jackson’s 1948 short story, The Lottery.

Considered to be one of the most famous short stories in American literature, The Lottery deals with a small-town society and the compliance and power dynamics within, similar to that of Lord of the Flies.

The short story follows residents of the town as they prepare for a lottery and discuss the traditions behind it and discuss, with horror, about how neighbouring towns have done away with their own lotteries in the recent years.

The story ends with a stomach-churning twist, making this brief read not the best right before bed, however, it is still a classic critique of how societies function and how we, as a people, are influenced by our peers.

If you liked Lord of the Flies because of its desert island settings, rather than the total bloody anarchy that ensues on said island, then you may enjoy Madeline Miller’s 2018 novel Circe.

This novel is especially great for those fans of the classics and Greco-Roman myth as it is a modern retelling of the story of Greek goddess Circe, most famous for her appearance in The Oddessy for having an affair with Odysseus and turning some of his men into swine when they come across her island.

The novel follows Circe from her birth, her love affairs and obsessions with mortals, and experimentations with magic that leads her to be exiled to her own isolated island.

While it is certainly different in plot compared to Lord of the Flies, it is a great “desert island book” and also features cameos from mythological favourites, including Odysseus, Daedalus, and Theseus.

Though Lord of the Flies is far more about the dangers of anarchy and a society without boundaries, no list based off a book set on an isolated island is complete without featuring Robinson Crusoe.

The quintessential “desert island book,” Robinson Crusoe follows the eponymous character as he is shipwrecked and stranded on an island near Trinidad for 28 years.

Published 300 years ago in 1719, Robinson Crusoe has undoubtedly stood the test of time and is still an excellent addition to any reading list, especially if you’re looking for some great books that are similar to Lord of the Flies.

Whether you’re looking for books like Lord of the Flies because you enjoyed reading about how societies function and examining human nature, or because you like to read about being stranded on a desert island, there are a number of fantastic works of literature that should keep you reading for ages to come!

Are you looking for a book like Lord of the Flies? Do you have any additions? Let us know in the comments! 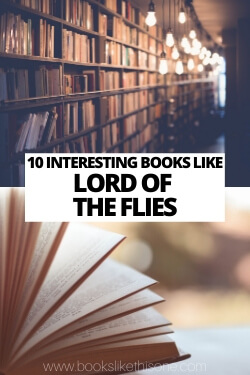