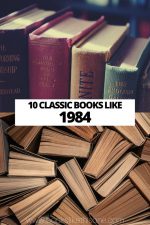 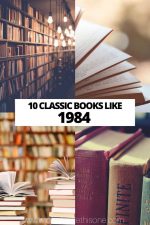 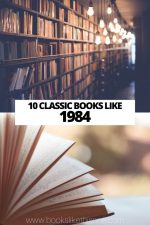 The classic novel can often seem daunting and outdated, but books like 1984 are simply timeless. The concept is perhaps even more terrifying now than it was when Orwell published it in 1949, with the idea that we’re all being watched, and not even our thoughts are safe.

Not many classic novels are like 1984 in concept, but the following list of novels are classics that remain ageless no matter when they’re read, providing life lessons and cautionary tales in love, family, politics and power.

Wuthering Heights is consistently referenced in today’s culture and goes down as one of the most famous classical novels around. The story is eternal – a poor boy meets a rich girl and falls in love; however, the characters of Heath and Cathy are anything but predictable.

Their tumultuous love causes dire consequences for both of them, and rages onto the next generation, creating a story that is unforgettable, much like 1984.

Emily Bronte, who published it in 1847 under the pseudonym Ellis Bell, accomplished something masterful with this novel, as it continues to be discussed and studied close to 200 years later.

Where most people gain their basic understanding of the roaring twenties, F. Scott Fitzgerald brings the period of American prohibition to life in his novel, The Great Gatsby.

When Nick Carraway, an aspiring writer working as a stockbroker, arrives in New York, he is full of illusions about his life and the city. He moves in next door to the mysterious Mr Jay Gatsby, who has a shared past with Nick’s married cousin, Daisy Buchanan.

Through a series of parties and affairs, Fitzgerald’s novel is a classic that stays with the reader well past the final page, teaching us harsh lessons about love and hope.

Although not like 1984 in the sense that a whole world has been built, as Oceania is, Fitzgerald examines the selfishness of people during this time period in America, the way Orwell scrutinises the ideals of Russia under Soviet Union rule.

Jane Eyre, just like other books like 1984, has spurred on a ripple effect of novels, films and tv shows that have adapted or taken inspiration from this 19th-century novel.

The story follows Jane, who, after being turned out by her cruel aunt, goes to school to become a teacher, and begins her first teaching job in Thornfield Hall, owned by Mr Rochester.

This is where one of the most classic love stories begins, with Jane falling more and more in love with Mr Rochester the longer she lives and teaches at Thornfield Hall.

But Mr Rochester is harbouring secrets, and after a series of strange incidents, Jane discovers there are many more obstacles to jump over than she bargained for, if she means to marry Mr Rochester.

A story about obstacles and love, the life of Jane Eyre goes down as timeless, just as 1984 does.

Brave New World, like 1984, was ahead of its time in concept and world-building.

Written in 1932, and no doubt as a response to the unrest going on in this era and the significant technological advances, Huxley explores the ideas of predestination and assigning humans classes, thoughts and feelings, similarly to 1984.

From the moment an embryo is created in this world, they are split up into classes, Alphas, Betas, Gammas, Deltas and Epsilons, and given the perceived correct traits for such classes.

Brave New World is often compared to 1984, and though 1984 normally receives more praise for its storytelling, Brave New World still presents some striking ideas about humanity and control and is well worth the read.

Voyage in the Dark, by Jean Rhys

Jean Rhys’ Voyage in the Dark is perhaps less well known, but it is a wonderful example of early modern fiction.

This novel follows Anna Morgan, who has recently moved from her home in the Caribbean to London, which seems dull and dreary in comparison.

Here, she meets Walter, whom she is wary of at first but whom she eventually falls in love with him, as he uses his wealth to take care of her.

However, Anna soon realises that not everyone she meets in London is a friend, and everyone is merely out for themselves, leading her to meet drastic consequences.

Books like 1984 and Voyage in the Dark hardly seem like they were written when they were, focusing on modern-day issues and themes that a reader of any generation can sympathise with or relate to.

It is no wonder that 1984 and Animal Farm are similar – written just three years before 1984, Animal Farm is an allegory depicting what occurred in post-revolutionary Russia.

This book explores the lives of animals who take over the farm they work on. Driving out Mr Jones, the farmer, and under the influence of Old Major, a pig who dies before he can see the revolution take place, pigs Napoleon and Snowball begin to change how the farm is run, all in the ideology that each of the animals will be treated equally.

It is here one of the most famous sentences in an Orwell novel is spoken – “all animals are equal, but some animals are more equal than others.”

This one sentence more or less portrays how post-revolution Russia was run, under the guise of equality but inevitably having some participants with more power than others.

The novel was so scandalous at the time of its publication, for the very real truths it was spewing, that it was banned for years in Russia, and still is in other communist countries.

If you’re looking for books similar to 1984, Animal Farm is a must-read, following many of the same themes.

The original horror story, Mary Shelley wrote Frankenstein in the early 1800s, and had it published anonymously.

When Doctor Victor Frankenstein begins to work on a new project that comes to life, he is faced with an existential crisis, and gets much more than he ever bargained for.

A story that frightens and appals, and has been the inspiration for films and tv series ever since, this tale is best read in its original format, as it would have been quite revolutionary when it was first published – perhaps one of the reasons that Shelley did not originally publish it under her own name.

Books like 1984 and Frankenstein were powerful in their time, spurring controversial discussions, about propaganda and control in 1984, and in science and religion in Frankenstein.

Although the story of The Picture of Dorian Gray isn’t quite like 1984, it follows a horror in much the same way.

Dorian Gray is an attractive socialite, who has a painting presented to him as his attractive, young self. Dorian, egotistical and self-seeking, wishes that the painting would grow old in his stead, wishing to remain immortal in his youth.

The story is captivating, as the painting begins to grow withered and ugly, reflecting Dorian’s own narcissistic and cruel actions.

The story is a cautionary tale, about narcissism and selfishness, one that has been retold many times, and like 1984, remains relevant to this day.

Bram Stoker wrote the original vampire story which became so popular this decade with the Twilight series. Dracula hardly seems like it was written in 1897.

When a young lawyer, Jonathon Harker finds himself in Transylvania to negotiate a land deal with nobleman Count Dracula, he suffers a series of wild happenings that spread all the way to England, specifically to his fiancée’s best friend.

This is the novel where many of the original vampire stereotypes originated, and it is a novel worth reading as opposed to just watching the movie. It poses interesting concepts about monsters and humanity, not in a dissimilar way to 1984.

Bradbury’s novel, Fahrenheit 451, is a book similar to 1984, in the sense that it is set in a world where thoughts and opinions are controlled by a powerful totalitarian state.

It takes a slightly different position than 1984, where in this future American society, books are burned to stop people from forming their own ideas on certain topics.

The protagonist, Guy Montag, is a fireman who is one of those who has been charged with the task of burning such books. It resembles 1984, and Guy can be compared to Winston, as he actively participates in the destruction of the previous way of life.

This, as in books like 1984, studies concepts and ideas that are alarmingly modern, creating a story that could be written today, in a world where fake news and control through media portrayal are ever-present.

All of these novels, though different in story and plot, do have something in common – they remain ageless and relevant despite some of them having been written over two centuries ago.

1984 frightens us because it was written seventy years ago, but somehow dredges up modern-day anxieties about how we’re always being watched, and our thoughts can’t even be trusted.

The rest of these novels speak to our modern-day reality in different ways, whether it is how men and women interact, what frightens us or how family live communally with one another. Each of these novels provides some worthwhile insight into our lives.

Are you looking for books similar to 1984? Have any suggestions that didn’t make the list? Let us know in the comments! 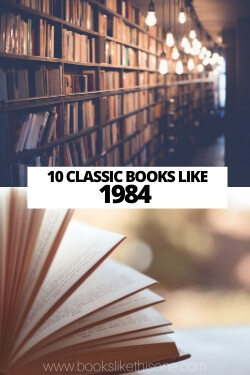