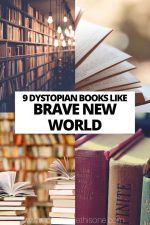 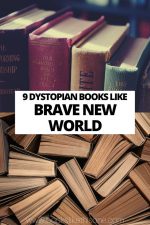 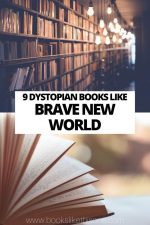 Aldous Huxley’s 1932 dystopia Brave New World set the stage for an entire genre of similar works, influencing many writers to put pen to paper and share with the world their view of a dystopian future. Brave New World is an important work that is said to have inspired writers like George Orwell and Ray Bradbury. Consistently finding itself on lists of the best English-language novels of all time, Huxley’s pivotal work is truly a masterpiece of dystopian literature. If you’ve read the novel and are looking for more books like Brave New World, there are numerous titles to choose from.

Probably the most obvious addition to any list of books like Brave New World is George Orwell’s 1949 masterpiece, 1984. Set in London in the year 1984, this pivotal dystopian novel takes place in what today is present-day London, Airstrip One. The country — which is now called Oceania — is in a state of perpetual war and its citizens are under constant observation by the oppressive, totalitarian government.

The novel follows Winston Smith, a mid-level government employee who begins to engage in a forbidden sexual relationship with Julia. Throughout this relationship, Winston begins to question the nature of the government, The Party, and the role that “Big Brother” has in their lives. His questioning of the governmental system results in his eventual imprisonment where we learn about the secrets of this oppressive regime.

The novel explores themes like the questioning of authority, human compliance and the power of individualism. It emphasises the dangers of totalitarian regimes while emphasising the importance of free thought. Similar to Brave New World, it takes a strong stance against censorship and totalitarian regimes.

Ray Bradbury’s 1953 novel Fahrenheit 451 is an excellent addition to any list of books like Huxley’s Brave New World. Set in a futuristic America that is believed to be at least 50-100 years from its publication, the novel follows the protagonist Guy Montag as he navigates the dystopian society that the USA as developed.

Montag is what is referred to as a “fireman,” a person whose job it is to burn books, which have been banned in the society. Citizens are instead subjected to a constant stream of superficial media and have numerous screens throughout their homes and public spaces.

Throughout the novel, Montag begins to question the culture of censorship and its totalitarian society. Having been written during the McCarthy era, Fahrenheit 451 is inherently critical of government censorship and is an attempt to warn against the dangers of suppression of free speech and thought.

As one of the most enduring dystopian novels of the 20th century, Fahrenheit 451 is an absolutely excellent read that is perfect if you’re looking for novels similar to Brave New World.

Published in 1985, Margaret Atwood’s 1985 dystopian novel The Handmaid’s Tale is a truly haunting addition to any list of books like Brave New World.

Perhaps best known for the recent Hulu television adaptation, The Handmaid’s Tale is set in a not-too-distant future where the US government has been overthrown by a radical religious/political group known as the Sons of Jacob. From the overthrow, the USA has been dissolved and, in its place, a tyrannical theocracy known as the Republic of Gilead is established.

In Gilead, women have been stripped of all of their previous rights — they are not allowed to read, hold jobs, handle money, or be free in any way. A hierarchical society has been set up where every citizen of Gilead has his or her own role. Set during a time where birth rates and fertility have been in decline, fertile women have been enslaved and are used as “handmaids” in order to be subjected to rape and bear children for their masters.

The Handmaid’s Tale is told through the point of view of Offred, a handmaid living in what was once Cambridge, Massachusetts. As a work of speculative fiction, Margaret Atwood is clear in saying that all of the things she wrote about in the novel have happened in some part of the world at some point in history. It is a truly cautionary tale about how totalitarian regimes are put in place and how we, as a society, can prevent them. It is also a great read if you are looking for books like Brave New World.

The Power, by Naomi Alderman

If you’re looking for books like Brave New World, an interesting and thought-provoking option would be Naomi Alderman’s 2016 novel The Power.

Set in a world where women have developed a power to send electrical bolts through their fingers and, because of this, they have become the dominant gender in the world.

It isn’t, however, much of a “girl power” and “ladies in charge” work that shows how much better off the world were be if women were in charge of everything. Instead, it examines the culture of abuse, dominance, and authoritarianism that people in power use to their advantage.

A haunting and compelling work of fiction, The Power has been the subject of much critical acclaim, earning a the Bailey’s Women’s Prize for Fiction, a spot on the New York Times’ top 10 books of 2017, and a mention as one of Barack Obama’s favourite books of the year 2016.

Set in a world where humans are living the longest lives in history, where once-fatal diseases like cancer and heart disease have all been eradicated, Never Let Me Go is told from the perspective of the protagonist, Kathy H.

Starting as something of a bildungsroman, the novel follows Kathy as she grows up and forms friendships and relationships at her seemingly idyllic English boarding school and contains the usual trials and tribulations of childhood and young adulthood. However, it becomes clear, that Kathy and her peers are not normal and something more sinister is at work throughout the text.

While Never Let Me Go isn’t necessarily a cautionary tale about a totalitarian regime, it is a beautiful work of speculative fiction about how we treat the human condition and, above all else, what it means to be human. It is also a fantastic read for those looking for books like Brave New World.

David Foster Wallace’s 1996 encyclopaedic novel Infinite Jest is a massive undertaking but is nonetheless a great choice for those looking for books like Brave New World.

Set in a not-too-distant future where the United States is now a massive country made up of Canada and Mexico, the president is a former pop star who ran on a platform of “cleaning up America,” and there is a feature film in circulation that is so addictive that those who watch it can never tear their eyes from screens, Infinite Jest made some startlingly accurate observations about what life in the future might look like.

This novel is more than 1,000 pages long and is known for its liberal use of footnotes, however, it is also one of the most critically acclaimed dystopias to have been published in the last few decades. It covers complex themes including the psychology of addiction and human behaviour, familial relationships, and the effects that absolute capitalism has on society.

If you’re looking for some books that are similar to Brave New World, then Infinite Jest might be a good option if you have the time and the stamina!

The Man in the High Castle, by Phillip K Dick

Phillip K Dick’s 1962 novel The Man in the High Castle is an excellent work of speculative fiction and a great option for readers who enjoyed Brave New World.

The novel explores what life might have been like had the Allies not won the war and how different the world would be if that has happened. Having received much critical acclaim since its publication, the novel was also adapted for television by Amazon Prime in 2015.

Though considered more speculative fiction rather than a dystopia, The Man in the High Castle is still an excellent choice for you if you’re looking for a book similar to Brave New World.

Though this 1937 novella is not one of Rand’s most notable works (you will have to read Atlas Shrugged or The Fountainhead for that), it is an obvious addition to this list of books like Brave New World.

Though short in length, Anthem is a fascinating story that examines the importance of the human ego and the power of individual thought, theories that Rand would later expand upon in her more well-known published works.

If you liked Brave New World because you were intrigued by Huxley’s idea of what the far distant future might look like, then Ayn Rand’s Anthem is a great book choice for you.

We, by Yevgeny Zamyatin

Yevgeny Zamyatin’s 1922 dystopian novel We is one of the most obvious additions to this list of books like Brave New World as it is believed to have inspired Huxley’s writing significantly. It has also served as inspiration for other writers on this list, like George Orwell and Ayn Rand.

We is set in a dystopian police state set in a far distant future. Citizens in this society are under total, perpetual surveillance and there is very little individual freedom. The novel explores many themes including life in a totalitarian state while drawing many Biblical allusions, as well.

Though the writer originally hailed from the Soviet Union, We was not published in Zamyatin’s home country of Russia until 1988, more than 65 years after it had been written. There are many similarities between Brave New World and We though Huxley denied ever having read the novel before writing his work. When discussing his own dystopia, Player Piano, author Kurt Vonnegut said that he “cheerfully ripped off the plot of Brave New World, whose plot had been cheerfully ripped off from Yevgeny Zamyatin’s We.”

Because of that, if you are searching for books like Brave New World, why not read the original and pick up a copy of We.

Are you looking for books like Brave New World? Do you have any additions that didn’t make the list? Let us know in the comments! 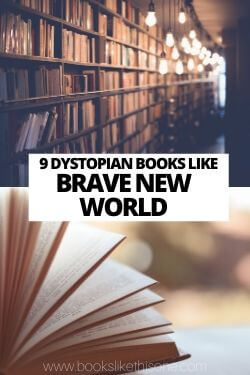