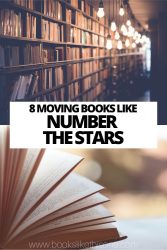 Number the Stars takes place in 1943 and follows ten-year-old Annemarie Johansen who lives in Copenhagen along with her best friend Ellen Rosen. However, Ellen is there because she has been forcibly relocated by the Nazis because she is Jewish.

Ellen has to pretend to be a member of the Johansen family and eventually Annmarie has to decide whether to go on a dangerous mission to save her friend’s life. Number the Stars is an inspiring read for young and older readers.

But if you’ve already read this book, what similar titles can you read next?

Because of Winn-Dixie, by Kate DiCamillo

Dark times call for positive reads, and books like Number the Stars give us cause for hope. Because of Winn-Dixie is a strong example of this. It features ten-year-old India Opal Buloni who has just moved from Watley to Naomi, Florida with her father the Preacher.

All the characters in Naomi have a sad past and each person has a painful incident that they are trying to forget. Winn-Dixie is the lost dog that India picks up one day and together they encourage all these people to open up and start enjoying life again.

If you’re looking for a positive read, this is a warm place to start.

Books similar to Number the Stars pit characters against extreme adversity in different ways. In Hatchet, it is ‘boy vs nature’ as Brian struggles to survive after his plane crashes into a forest.

Trying to survive on instinct alone and draw on the small experiences from his past, Brian begins to wonder if he will ever see his family again.

There are fewer and fewer books written specifically for young boys, and whilst this story has dated, there is still much to enjoy in Brian’s adventure. Armed with nothing but the hatchet his mother gave him, it is enjoyable to read how Brian adapts and grows when faced with overwhelming odds.

If you like the outdoors, you’ll enjoy this story.

In Spanish, Esperanza means ‘hope’. Books like Number the Stars often place hope as a central theme to the story. Esperanza Rising is a book that can’t help but make you feel hopeful.

Esperanza Ortega lives a fairytale life in Mexico. She has fancy dresses, a wonderful home and servants. Then overnight she and her mother are forced to flee to California during the Great Depression where they settle in a camp for Mexican farmworkers.

Now Esperanza must contend with racism, sexism, financial struggle and hard labour. And when this new existence is threatened, Esperanza has to find a way to rise above it all to save her mother’s life and her own.

Faith, belief, dreams, survival and hope are at the core of this story.

The Devil’s Arithmetic, by Jane Yolen

Hope springs eternal in The Devil’s Arithmetic. Another similar title to Number the Stars reminds us of the importance of studying history and never forgetting what happened.

Hanna lives in 1990s New York, but when she opens the door of her grandparents’ apartment to look for the Prophet Elijah, Hanna finds herself in Poland, 1941 and her name is Chaya.

The rest of the story follows her journey to a concentration camp, where Chaya/Hanna is forced to grow up quickly amidst unbearable levels of cruelty.

Hope is what keeps Chaya/Hanna going. It also keeps the reader going too and is a valuable lesson for younger readers.

Moving, elegant, and filled with hope against all the odds, The Devil’s Arithmetic is still used in classrooms around the world. It serves as a useful reminder to future generations of the past, and just how quickly society can succumb to fascists if we don’t pay attention.

Brown Girl Dreaming is a poetic account of Woodson’s childhood upbringing in South Carolina and Brooklyn during the 1960s.

Books like Number the Stars place the reader into some of the darkest times of humanity. Brown Girl Dreaming is just as terrifying and hopeful as reading about holocaust stories.

Hope and fear meld together as Woodson describes in intricately whimsical detail about what it was like to be a black kid in the late 60s. Reading about how she met her ‘forever friend’ Maria, is pretty tear-jerking (in a good way), and you can see how talented a writer Woodson is.

Against the racist-sexist backdrop, Woodson somehow manages to convey just how beautiful the world and its many inhabitants can still be.

Nearly thirteen, Amy Treloar is struggling not to resent her eleven-year-old brain-damaged sister, Louann. When it becomes too much, Amy runs off to her Aunt Claire who gets Amy some respite from her sister.

It is in Aunt Claire’s house that Amy discovers an exact replica of the old family home and the replica dolls of the Treloar family from Aunt Claire’s childhood. But the dolls seem to move when they’re not being watched and Amy thinks they’re trying to send her a message…

Books similiar to Number the Stars deal with the spooky as well as the mental health of the protagonists. Amy is relatable as the sister of someone who has special educational needs (SEN) and you can see her levels of anxiety and anger build as she tries to be grown up and understand Louann’s behaviour.

The Dollhouse Murders is a slim mystery novel, both creepy and touching.

Have you ever been poor? I mean really poor? The kind of poverty that leaves you wondering how you are going to eat or clothe yourself? Deza Malone is here to tell you about what being really poor and black during a depression is actually like.

Worm and bug-infested porridge. Shoes that are falling apart. Being so far from hope that you can barely see the next hour ahead, let alone the next day. Poverty can strike anyone at any time, but no one talks about it enough.

The Mighty Miss Malone follows Deza and her family as they try to chart a course through poverty, racism, misogyny and more.

Books like Number the Stars aren’t afraid to weave magic through tragedy, and despite all the hardships that Deza faces, she manages to remain upbeat, hopeful and even bouncy in her manner sometimes.

Intelligent, funny and heartfelt, The Mighty Miss Malone is a recommendation for any reader.

Some books force a reader to come to terms with how quickly your life can change through no fault of your own.

Drums, Girls & Dangerous Pie could be seen as ‘yet-another-heart-warming-cancer-survival-story’, but it deals with a subject that isn’t talked about enough – how cancer affects friends and family.

Thirteen-year-old Steven is being a typical teen. He plays drums in a jazz band, has a crush on the hottest girl in school, and is always annoyed with his irritating little brother, Jeffrey. But then Jeffrey is diagnosed with leukemia and Steven is suddenly confronted with things he’s never had to deal with.

Little brothers can be annoying; I have one myself and I remember what it was like when I was thirteen. However, I also know how lonely it felt when all the attention seemed to be on my brother, and not me.

Imagine suddenly learning your sibling is seriously ill, and your parents trying to keep everything together whilst they deal with this crisis. How would you feel? Guilty? Ashamed? Angry? Upset?

Drums, Girls & Dangerous Pie shines a much-needed light into how cancer doesn’t just affect the person who is diagnosed.

Number the Stars represents hope in dark times. All the books above do a similar thing and I would recommend giving them a read if you are looking for something new-yet-similar to Lois Lowry’s novel.

Are you looking for more books similar to Number the Stars? Have any recommendations that didn’t make the list? Let us know in the comments! 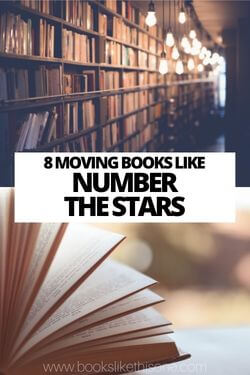