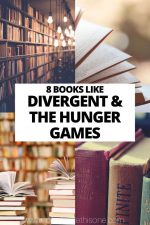 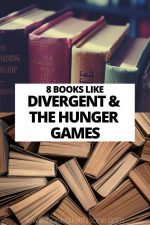 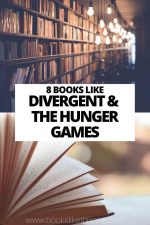 The Hunger Games and Divergent have arguably launched YA dystopian fiction into the stratosphere. Katniss and Tris have brought an army of strong female leads to the fore, resulting in hundreds of similar novels lining bookshelves and filling devices the world over. What to read if you’ve already read The Hunger Games trilogy and gorged your way through Divergent, Insurgent and Allegiant? You could read a lovely romantic comedy, but if you’re looking for books like Divergent or The Hunger Games, we have a few suggestions below.

The Tripods Trilogy – The White Mountains, by John Christopher

There are many books like Divergent that have been published in the past decade, but readers brave enough to look before the 21st century are in for a treat. The White Mountains was published all the way back in 1967 and was the first in a dystopian trilogy in which humanity lives a peaceful enough pre-industrial existence.

Life is normal, except that at the age of 13 everyone is subjected to ‘capping’ by the mysterious Tripods – giant three-legged machines that roam the world under the control of the mysterious ‘masters’. Protagonist Will is approaching his 13th birthday and looking forward to his own ‘capping’ whereby he will be considered a full adult. But a chance encounter with a ‘fake-capped’ man called Ozymandius leads Will into a new world where he learns of the ruthless control the Tripods have asserted over humanity.

The Tripods Trilogy was published 40 years before Divergent yet thematically, they can sit side by side. Will and Tris both have to come to terms with a horrifying reality as well as join a resistance against the control of a totalitarian regime.

The White Mountains is a fantastic read, ably followed by The City of Gold and Lead and The Pool of Fire. The BBC TV series broadcast in the 1980s tried hard to do the novels justice, but a rapidly expanding budget forced the network to cease production after adapting The City of Gold and Lead. To find out what happens to Will, I recommend reading the trilogy in full as it remains a staple of dystopian fiction to this day.

Another book similar to Divergent is this incredibly warm and under-stated political thriller set in an alternate world where Goblins and Elves live. Our protagonist is Maia, a young goblin of mixed heritage who unexpectedly ascends to the throne after his father and family are all killed. Maia is much like Tris in that he is forced into a situation he neither chose nor wanted.

Navigating the complicated politics of imperial court becomes a painful chore, and his lack of social nuance and grace causes him many problems. On top of this, he has to survive plots, counterplots and even cultural resistance from his own bodyguards.

Another similarity to Divergent rests in the novel’s treatment of class and culture. Maia is unschooled and at odds with the court round him, but like Tris must become a focal point to unify disparate factions of society for lasting change to occur. Winningly The Goblin Emperor retains a warmth in tone that other dystopian books like Divergent can learn a lot from. Highly recommended.

The Maze Runner, by James Dashner

It is impossible to talk about books like Divergent or The Hunger Games without mentioning The Maze Runner. Published in 2009 (1 year after The Hunger Games), Dashner’s novel drops the reader straight into a mystery.

Protagonist Thomas, wakes up in a metal lift that brings him to a place called ‘the Glade’ (sound familiar?). Unlike Katniss though, Thomas has no memory of who he is or how he got there. The narrative then draws on Lord of the Flies when Thomas discovers the Glade is run by 2 boys: Alby and Newt. They maintain order by enforcing simple rules as the lift returns each month with food and supplies, including weapons and a new boy with no memory.

The Glade is surrounded by 4-mile high concrete walls that shield them from a maze where dangerous creatures stalk. There are undeniable thematic similarities to both The Hunger Games and Divergent but The Maze Runner delves further. With no rule to state that ‘gladers’ have to battle each other to the death, a strange sort of society has formed between the children.

The narrative becomes more urgent as the plot progresses leading readers on a whirlwind adventure as Thomas and his friends try to escape the maze before the creatures stalking it, hunt them down. A recommended read for anyone wanting a fun and fast-paced adventure.

Finding books like Divergent and The Hunger Games doesn’t take very long. Finding a novel similar yet different can take a bit longer. Aversion is described as ‘paranormal fiction’ by Udogu and when read, you can see why.

Protagonist Gemma is someone who ‘averts’ people from a future disaster. She does this by pushing a thought into their head to guide them clear of catastrophic decisions. Things change when she fails to complete ‘an aversion’ on Russ Tanner. Or does she?

Russ doesn’t want to forget and is doing everything he can to learn more about Gemma, which is a problem as aversion subjects have to forget. Gemma lives outside of society, much like Tris and Katniss. She doesn’t relate to people as well as she’d like and because of her power, tends to distance herself naturally.

But like Tris and Katniss, she has no choice but to challenge her perceptions of reality and what the future could hold if she gives it a chance. The first in ‘The Mentalist’ series, Aversion is well worth a look if you’re in the market for books similar to The Hunger Games or Divergent.

The 5th Wave, by Rick Yancey

On the surface, The 5th Wave is yet another story of alien invasion. Been there, destroyed that, next! Yet the moment you turn the page and learn how Cassie has survived 5 waves of alien invasion – each wave taking another member of her family – you realise that this is something different to the usual alien invasion tales.

Character is always a good place to start in a book, and Cassie is likeable. Things really begin to motor when she runs into Evan Walker, a man who may or may not be her last hope. Her fears and doubts mirror Katniss and Tris’s, and her drive to rescue her brother from ‘the others’ whilst staying alive echo both The Hunger Games and Divergent.

Being dropped into a world already destroyed by alien invasion is a great starting point, further aiding the reader’s desire to follow Cassie to the end of her story, be it good or bad. Trying to figure out whether Evan is on Cassie’s side or not reflects a classic fictional trope, but it remains fun nonetheless. Worth a read and more detailed than the film adaptation.

The Selection, by Kiera Cass

Toss a coin into the jar and listen to your bard sing you another dystopian tale of woe. Books like Divergent and The Hunger Games remain popular and when reading The Selection, it is easy to see why. A future world where everyone is divided into castes? Check. Royals and elites at the top, drug users, the unemployed and the poor at the bottom? Check. But as the good writer says “Often it’s not the story that counts, but how you tell it.” Cass tells protagonist America’s story well.

Society has been divided into numbers with the aforementioned Royals and elites being ‘Ones’ and the poor ‘Eights’. America is a ‘Five’ so exists comfortably in a lower class life she enjoys because it allows her to play her violin and entertain people. Things soon change when a bad break up and pressure from her mother pushes America into the ‘Selection’ – a process whereby the prince of Illea holds a competition in which girls compete for his hand in marriage.

This is a controversial advert for young independent women, but America’s drive to succeed does mirror Katniss and Tris’s own struggles against a society they don’t really want to be a part of. Echoes of Cinderella as well as Divergent and The Hunger Games flow throughout, and whilst I would not recommend this as a great example of forward-thinking feminism, it remains a popular book with many readers.

Slow-moving tales often receive criticism from some readers, but this underrated gem shows just how to construct an intriguing narrative without racing to the finish. Books like Divergent come in all shapes and sizes and whilst Miss Peregrine’s Home for Peculiar Children appears far removed from Tris’s exploits, a sense of mystery and secrets pervades both novels.

Mixing fiction with photography, Riggs’ novel follows 16-year-old Jacob as a family tragedy sends him journeying to a remote island off the coast of Wales. Here he discovers the ruins of what was once Miss Peregrine’s Home for Peculiar Children. Here is where odd and peculiar children with strange powers may or may not have been quarantined during the second world war.

The most clever aspect of this entertaining read is how the narrative casts uncertainty over Jacob’s grandfather. Was he telling the truth about the island? Or did he just make the whole thing up as a story for Jacob? Add in a clever treasure hunt where Jacob fact checks his grandfather’s antique photos of the home against the ruins, and you have a tale that draws favourable comparisons to The Hunger Games and even the X-Men comics.

Another New York Times bestseller, Delirium is set in a bleak alternate version of the USA where love has been declared a disease. Paralleling similar titles like The Hunger Games and Divergent, Oliver’s novel takes dystopian fiction a step further.

Protagonist Lena, lives in Maine with her aunt and uncle and is looking forward to being ‘cured’ of love the moment she turns 18. Love destroyed her mother and she doesn’t want to make the same mistake. Of course, with less than three months to go, a boy called Alex enters Lena’s life, challenging her views on whether the ‘cure’ is actually what the government claims.

At first glance, it would be easy to write-off Delirium as yet another tragic romance story, but there is a reason tragic romance stories continue to thrive; many of them are hard to put down. Extremely popular with young adults and adults alike, Delirium represents another intriguing approach to doomed love.

The popularity of dystopian fiction shows no sign of abating. Every year more books and films are being written and produced, perhaps because they reflect those uncomfortable aspects of our own world. With a multitude of books like Divergent and The Hunger Games available to read, the only question you need ask yourself is simply where to begin.

Are you looking for books like The Hunger Games and Divergent? Have any suggestions that didn’t make the list? Let us know in the comments! 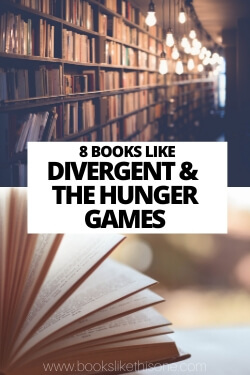