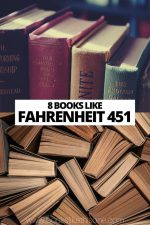 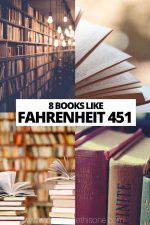 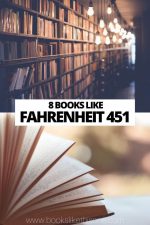 Ray Bradbury’s 1953 dystopian novel, Fahrenheit 451, has provoked millions of its readers to question such things like censorship and the role that books and literature play in a free and informed society. This book has piqued the interest of many into reading more dystopia and speculative fiction and leave them searching for more books like Fahrenheit 451.

So, you are eager to find some novels similar to Ray Bradbury’s most influential work, then look no further, as these eight books like Fahrenheit 451 are sure to encourage similar ponderings about the state of society today.

This 2005 novel by English novelist Kazuo Ishiguro is set in an indeterminate time in the future or alternate universe where most major world diseases have been eliminated and human life-expectancy is at an incredible high.

The novel follows Kathy H as she grows up in a seemingly idyllic rural English boarding school and fosters friendships and relationships with her peers Ruth and Tommy.

The book, written as though everything is normal, sets up for a large reveal in why Kathy’s and her fellow classmates are inherently “special” and calls to question the morality of and of finding a cure for the greater good of society and the toll it takes on the faceless few.

Never Let Me Go, though it doesn’t deal with such issues as censorship and oppressive governments like in Fahrenheit 451, does cover themes about humanity in a world not all that different from our own. It was also turned into a major motion picture in 2010 starring Carey Mulligan, Andrew Garfield, and Keira Knightly.

If you’re on the hunt for books like Fahrenheit 451 and you want to read another social critique that was written in post-WWII America, then Kurt Vonnegut’s Slaughterhouse-Fiveis a great choice for you.

Considered to be one of Vonnegut’s best works, Slaughterhouse-Five is a postmodern masterpiece that expertly switches between the present day and an alien zoo sometime in the future on the fictional planet Tralfamadore.

The novel centres on Billy Pilgrim, one of the few survivors of the 1945 Allied firebombings of Dresden. An American POW in Germany, Pilgrim was held in the basement of an abandoned slaughterhouse during the bombings (as Vonnegut himself was) and suffers from severe PTSD afterwards.

Known to be one the most powerful anti-war novels of its time, Slaughterhouse-Five has earned itself its fair share of censorship and criticism. It is also considered to be one of the first works of literature to acknowledge that homosexuals were victims of the Holocaust.

Published in 1969, Slaughterhouse-Five is an excellent choice if you’re looking for books similar to Fahrenheit 451.

Published in 1931, Aldous Huxley’s Brave New World is a great option if you’re looking to read more of the dystopian genre.

Considered be one of the pinnacle works of dystopian literature and known to have influenced writers like Orwell, Bradbury, and others, Brave New World is an essential addition to your reading list if you’re looking for books similar to Fahrenheit 451.

Set in London in the distant future — AF (After Ford) 632 or 2540 in the Gregorian calendar — the novel follows Bernard Marx, a psychologist. The novel examines a society where figures like Henry Ford are looked at as a messiah of the modern-day. The novel follows similar themes to Fahrenheit 451 such as mass conformity and an illusion of happiness.

If you’re interested in reading one of the most respected and earliest works of dystopia, then Brave New World is a fantastic choice for you.

If you’ve already read this book, check out our list of more books like Brave New World.

Ayn Rand is famous amongst the dystopian genre, and some of her political positions have proved to be quite controversial to this day. However, if you are looking for a great book like Fahrenheit 451, you can’t go wrong with Anthem.

One of Rand’s lesser-known works, this 1938 novella follows Equality 7-2521, a young man living in an unspecified area of the future where society has collapsed into another Dark Age.

The society in the novel follows a sort of futuristic caste system and the protagonist commits a number of “transgressions” such as exploring areas that are forbidden. During such explorations, he eventually is able to rediscover electricity and sees the value of individualism, a thought which has been stamped out in this future, primitive society.

Anthem is similar to Fahrenheit 451 as it imagines a future where humanity has regressed — though in this work, it has a fair bit more than in Bradbury’s — and it stresses the importance of free thought and individualism.

Margaret Atwood’s 1985 work of speculative fiction, which has recently been made into a Hulu television series, is a great option if you’re looking for books similar to Fahrenheit 451, particularly if you’re interested in examining a dystopian, not too distant future.

The Handmaid’s Tale follows Offred, a young woman living in the US state of Massachusetts in a theocracy called the Republic of Gilead, a regime which overthrew the United States government and in turn established a repressive, totalitarian regime. This regime, based off of a gross misreading of the Old Testament, establishes a hierarchical society in which women, in particular, are completely stripped of their rights.

Though not an easy read, The Handmaid’s Tale is an excellent novel and a truly cautionary work of fiction that will teach the reader to not get complacent in their free society.

Though not a dystopia set in an indeterminate future, Octavia E Butler’s Kindred is a great choice if you’re on the search for books similar to Fahrenheit 451. Published in 1979, the novel follows Dana Franklin, a modern-day black woman who is inexplicably called back in time to a Maryland plantation in the antebellum south.

Faced with what she knows of the future, Dana must learn how to survive in a world where she is very much considered less than a human.

Kindred is a unique slave narrative that calls into consideration one of the most horrific parts of American history through the eyes of a modern-day woman. Though not explicitly a cautionary tale about what could happen in the future, it fearlessly examines what has happened in the past in frightening detail.

If you are interested in speculative or dystopian fiction and want another fantastic novel to add to your reading list, then look no further than Kindred.

The Man in the High Castle, by Phillip K Dick

Now an Amazon television series, Phillip K Dick’s 1962 novel The Man in the High Castle is an excellent work of speculative fiction and a great choice if you’re looking for books like Fahrenheit 451.

Set fifteen years after the end of WWII, the novel takes place in an alternative past where the Axis Powers were victorious. In this universe, the former west coast of the United States is occupied by Imperial Japan while the east coast is occupied by Nazi Germany.

Bearing the subtitle: “An electrifying novel of our world as it might have been,” The Man in the High Castle calls into question the freedom and the rights the west takes for granted and how easily history might have been different.

Similar to Fahrenheit 451, the novel also deals with the concept of government censorship and lack of personal freedom that once existed in the world.

Perhaps the most famous dystopian novel in publication today, George Orwell’s 1984 is one of the best examples of books like Fahrenheit 451.

Originally published in 1949, 1984 is set in a dystopian future in what today is present-day London (Airstrip One). The country (known as Oceania) is in a state of perpetual war and its citizens are under constant observation by the oppressive, totalitarian government.

The novel follows Winston Smith, a mid-level government employee who begins to engage in a forbidden sexual relationship with Julia. During this relationship, Winston begins to question the constant government propaganda that he is subjected to and is later arrested for his individual thought — known as “thought crime.”

The novel examines such things as the power of individualism and the dangers of a totalitarian government while emphasising the importance of free thought. Similar to Fahrenheit 451, it takes a strong stance against censorship and totalitarian regimes.

Finding some great, thought-provoking books like Fahrenheit 451 is not a difficult task and these eight books should get you started.

Are you looking for books like Ray Bradbury’s Fahrenheit 451? Do you have any more to add? Let us know in the comments! 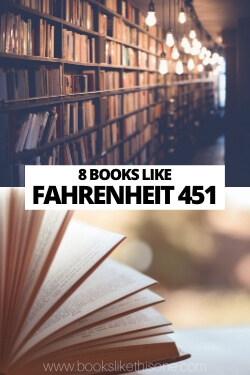