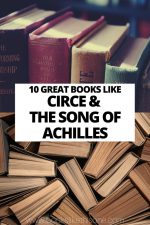 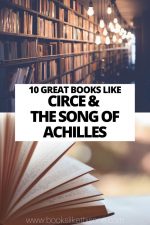 Madeline Miller’s novels The Song of Achilles and Circe won both critical acclaim and the hearts of readers with the fantastic writing style and in-depth retelling of mythic figures we thought we knew. While modern literature with a basis in Greek epics is certainly nothing new, both of Miller’s novels (published in 2011 and 2018 respectively) have charmed a new generation of readers and given them a keen interest in the classics. If you’ve already ploughed your way through these two novels and are looking for more books like Circe and The Song of Achilles, check out these ten ace suggestions which are sure to transport you back to ancient Greece or Rome.

The Penelopiad, by Margaret Atwood

Much in the way that Circe humanises a previously misunderstood character in Homer’s Odyssey, as does Margaret Atwood’s The Penelopiad. This 2005 novel is told from the perspective of Penelope, Odysseus’ wife on Ithaca.

Where in the Odyssey, all you know of Penelope is her steadfast loyalty to Odysseus in the while resisting the advances of the suitors, Homer’s epic does little to define her as a character. If you were intrigued by Penelope’s character in Circe, then you will certainly enjoy reading about the events of the Odyssey from her perspective.

Written in a style similar to that of a Greek tragedy, The Penelopiad gives a voice not only to Penelope, but also the 12 maids hanged by Telemachus (on Odysseus’ orders). The novel is told in Atwood’s famous feminist voice and is a must-read for those looking for books like Circe.

Much like The Penelopiad, Ursula K Le Guin’s Lavinia gives a voice to a previously voiceless woman — this time taking from Virgil’s Aeneid. In Virgil’s work on the founding of ancient Rome, Lavinia is a present character who plays a role, however, throughout the entire epic, she never speaks a word.

Le Guin’s 2008 novel is based on the last 6 books of the Aeneid but is told entirely through the perspective of the princess Lavinia. Following her from her birth, childhood, marriage and through the events of the Aeneid, the reader learns about the founding of Rome from a female perspective — something that is nearly unheard of in classic literature.

If you are looking for another female centred retelling of famous Greco-Roman myth or are just on the hunt for more books like The Song of Achilles or Circe, then Lavinia is a must read.

House of Names, by Colm Toibin

If you are to believe his accounts in The Odyssey, then all women are evil and bound to kill you much like Agamemnon’s wife Clytemnestra. In the sexist nature of the classics, however, you only ever get Agamemnon’s perspective of the events.

This all changes, however, in Colm Toibin’s 2017 novel House of Names which follows the events in the house of Agamemnon after his sacrifice of his daughter Iphigenia to the gods prior to leading the troops in the Trojan War.

House of Names follows the dynamics of betrayal and loss of trust within a prominent Greek family and is an excellent modern retelling of a classic story. Much like in books like Circe and The Song of Achilles, Toibin’s novel takes place alongside such stories as The Iliad and The Odyssey and makes an excellent companion if you want to more deeply understand both epics.

The Silence of the Girls, by Pat Barker

A powerful retelling of The Iliad, Pat Barker’s 2018 The Silence of the Girls is an excellent choice if you want to read a similar to The Song of Achilles.

Though the title of this recent novel informs you of the glaring lack of a female voice in Homer’s Iliad, this critically-acclaimed novel is told from the perspective of Briseis.

Though she is a title character in The Illiad, especially as a symbol of the dispute between Achilles and Agamemnon, The Silence of the Girls is told through her perspective after Troy falls to the Greeks and she is given as a human prize to Achilles.

While it is glossed over in The Illiad, Barker’s novel is not shy is outlining the trials and struggles of being a woman in a man’s world, giving voices to the Trojan women that have thus far simply been symbols in literature.

If you enjoyed books like The Song of Achilles and Circe for their mythic elements and not so much for their adherence to established storylines, then Neil Gaiman’s American Gods (which was also turned into an Amazon Prime series in 2017) might be a good choice for you.

This 2001 novel follows the protagonist Shadow after he is released from prison and finds that his beloved wife has been killed in an accident just prior to his release. Unsure of his next steps, he ends up in the employment of the mysterious Mr Wednesday.

American Gods skillfully examines what happens to mythological heritage and old beliefs after people immigrate to America. Combining mythic culture from across the globe and told in Gaiman’s notoriously captivating voice, American Gods is a fantastic choice if you want to be transported to a world where gods live among men and are as flawed and nuanced as their human counterparts.

The Mists of Avalon, by Marion Zimmer Bradley

If you like Circe because of the modern retelling of what literature has traditionally painted as a one-dimensional witch with no defining characteristics, then Marion Zimmer Bradley’s 1983 novel The Mists of Avalon might be a good choice for you as well.

This epic novel is an illustrative retelling of the legend of King Arthur told primarily through the eyes of Morgaine (also called Morgan le Fay in other works of Arthurian literature) as she fights against the influx of Christianity in the help to keep the traditional Pagan way of life.

This fantasy epic is an excellent choice for those looking for books like The Song of Achilles and Circe because it has a beautiful knack to both enthral readers and to make previously unsympathetic characters multidimensional.

Moving away from modern books like Circe and The Song of Achilles, it’s time to discuss the classics in which many if the characters and dynamics upon which Madeline Miller’s novels are based.

One great book to read is Euripides’ tragedy Medea. While you should know the character of Medea (who is Circe’s niece) from her brief appearance in Circe, this classic play follows the sorceress after the events of her arc in Miller’s novel. A story of a woman scorned and seeking revenge, Medea is not the most sympathetic character, however, modern productions of this play have attempted to make it feminist in nature.

If you want a more thorough understanding of the basis of the myth that is covered in books like The Song of Achilles and Circe, then reading Medea is a good choice for you.

Another fantastic read if you want to understand the myths surrounding all of these modern retellings is Edith Hamilton’s Mythology: Timeless Tales of Gods and Heroes.

Originally published in 1942, this book is the essential text used when reading about all of the Greek, Roman, and Norse myths. And, despite its age, it is likely that this was the text you used when covering mythology in school.

This timeless work of all of the most common Greek and Roman myths including the creation story of the origin of the Olympians, the myths of heroes like Heracles and the story of Jason and the Golden Fleece, and the classic stories behind Trojan war heroes like Odysseus, Agamemnon and, of course, Achilles and Patroclus.

Edith Hamilton’s Mythology is an excellent companion to books like The Song of Achilles and Circe as it can show you how Miller has expertly expanded upon established myth and humanised some unsympathetic characters.

The Iliad, by Homer

Of course, no list about books similar to The Song of Achilles would be complete without mentioning its basis, Homer’s Iliad.

As one of the most famous epic poems of all time, The Iliad tells the story of the Trojan war. Covering everything about the ten-year war including the feud between Achilles and Agamemnon, the many battles and heroes, and the rage of Achilles after the death of Patroclus, it is a poem that everyone must read in their lifetime if they are interested in Greek mythology.

The Iliad is also one of the bases for questioning the nature of the relationship between Achilles and Patroclus, in which The Song of Achilles was able to so beautifully expand upon.

The Odyssey, by Homer

Homer’s other epic is best known for following Odysseus on his ten-year-long journey home to Ithaca from the Trojan War. In this epic, Odysseus battles Scylla and Charybdis, makes it past the Sirens alive, tricks the Cyclops Polyphemus, is held captive for years by the nymph Calypso, and notably spends a year on exiled Circe’s island of Aeaea.

While most people know The Odyssey because of these stories, it actually takes up a surprisingly small amount of the epic. There is also the interesting plot of what is happening on Ithaca, examining the dynamic of Odysseus’ son Telemachus and his wife Penelope and how Odysseus must thwart the suitors.

The most common English-language translation of The Odyssey is by the late classicist Robert Fitzgerald published in 1965, I would recommend reading the 2017 translation by Emily Wilson, who is the first woman to have translated Homer’s epic into English.

From ancient classics to modern retellings, there a number of fantastic books like Circe and The Song of Achilles to add to your reading list.

Are you looking for books similar to The Song of Achilles and Circe? Do you have any more recommendations to add? Let us know in the comments! 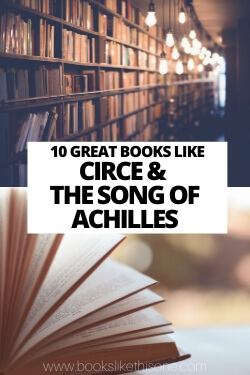