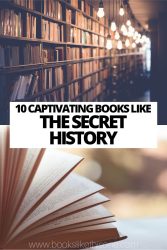 Books like The Secret History have an ability to hook you in as the mystery unravels from page one. Pulitzer Prize for Fiction winner Donna Tartt’s debut novel has been praised for its beautifully written, well-paced story and complex characters.

The Secret History follows a group of students at an elite liberal arts college in 1980s Vermont who study Ancient Greek under the eccentric Professor Julian Morrow. Narrated by one of the six students, Richard Papen, the plot follows the murder of their friend, Bunny, and the events that led up to and followed his death.

After Bunny’s death, the lives of the other students begin to fall apart and they start to turn on one another. This story of morality, corruption and betrayal will make you crave more books similar to The Secret History.

If We Were Villains, by M.L Rio

For my first book like The Secret History, I am going to suggest If We Were Villains by M. L. Rio.

Much like Tartt’s book, the plot follows Oliver Marks reflecting on a murder in a group of seven friends studying Shakespeare at an elite arts college.

After spending ten years in jail for a crime he may or may not have committed, Detective Colborne visits to find out what really happened all those years ago before he retires to a quiet life. Similar to The Secret History with its dark themes and complex friendships, fans will love this book.

If you’re looking for more dark academia books similar to The Secret History then look no further than Ninth House by Leigh Bardugo. This fantasy mystery focuses on Alex Stern who finds herself the only survivor of a brutal, unsolved multiple homicide.

In her hospital bed, she is offered a place in Yale’s freshman class with all expenses paid. There’s a catch – Alex is tasked with investigating Yale’s secret societies which the wealthy and powerful frequent. She soon finds their occult activities may be worse than imagined.

Also following college students involved in occult activities, Ninth House is perfect for those who are looking to fill a The Secret History sized hole.

Truly Devious by Maureen Johnson is a great replacement for The Secret History if you liked the mystery elements of the book.

This book is the first in the young adult mystery thriller trilogy. Truly Devious is set at a school for gifted children in Vermont, where in the 1930s a famous unsolved kidnapping and murder occurred.

Stevie, the main character, is the newest student at Ellingham Academy and a true crime fanatic. Obsessed with the idea of solving the old cold case, Stevie finds herself wrapped up in another murder mystery in the present.

Not knowing who she can trust, Stevie finds herself doubting everyone, even her close friends, in her quest to find the murderer. This book is recommended for people wanting more mystery stories like The Secret History.

For the readers who loved the Ancient Greek and Classics aspect of The Secret History, you will love The Song of Achilles by Madeline Miller.

The novel retells the story of Greek hero, Achilles, from the point of view of his best friend, Patroclus, who is exiled to the court of Peleus by his own father after accidentally killing a noble boy.

Soon, Patroclus finds himself falling in love with Achilles whose demi-god status meant he was more skilled and attractive. We follow the characters through until their destruction. It could be compared to Shakespeare’s Romeo and Juliet for its romantic tragedy.

Miller is unafraid to explore this relationship unlike many others who produced work relating to Homer’s The Iliad and I would recommend this for readers who like fresh takes on old stories. If you want more books like The Secret History, then pick this one up!

There are books like The Secret History that capture the character’s emotional conflict incredibly and We Were Liars is one of them. Lockhart provides us with a mystery much like Tartt does where we know what has happened but not how.

Unlike The Secret History, the narrator isn’t speaking retrospectively but has lost all memory of the tragic accident. The main character, Cadence, spends summer after summer on her family’s private island, with Gat and her cousins. However, there is a rift between the families about who will eventually inherit the island and its estate.

Fed up of the situation, Cadence suggests that they burn the estate to the ground to end the feud. However, Cadence has an accident that leaves her with no memory of what happened.

Unable to contact Gat, she finally visits the island two years later where her memories slowly start to come back to her and the truth is revealed. We Were Liars is a young adult mystery for those who want an easier to read book like The Secret History.

Vicious is set in college and follows two roommates – Victor and Eli.

Much like The Secret History where the characters take part in increasingly wild rituals to summon the god Dionysus, Vicious follows Victor and Eli in their senior year as they research how under the right circumstances, someone could develop supernatural abilities.

Ten years later, Victor breaks out of prison with a mission to find Eli. Both are armed with great power and the question is, who will live? A story of friend to foe, Vicious is a perfect find for those who wish to read more books like The Secret History.

The Likeness, by Tana French

The Likeness is an obvious recommendation for books similar to The Secret History, as French herself said her book was inspired by Tartt’s work.

The second book in the Dublin Detective Squad series, we follow Cassie Maddox who transfers out of the Murder squad to date her co-detective, Sam.

When she is called to the scene of a crime, she is shocked to find the body is her double and the ID states her name is Lexie Madison – the name Cassie used years ago when working undercover. She is sent undercover once more to tempt the killer out of hiding in hopes they will be caught.

If you like exploring powerful and passionate friendships, The Likeness is for you.

If you’re a fan of classic novels, then Oscar Wilde’s The Picture of Dorian Gray is the perfect book similar to The Secret History.

Wilde’s most popular book follows Dorian Gray, a young man who meets Basil Hallward, an artist who paints various portraits of Dorian and is infatuated with his appearance. Dorian would do anything, even sell his soul for eternal beauty and youth, like captured in the painting.

The novel explores the morality of beauty and youth, the superficiality of society, the purpose of art as well as the negative consequences of influence.

Like The Secret History, this book has the gothic and philosophical elements that Tartt weaves into her writing.

Have you already read this novel? Check out our list of books like The Picture of Dorian Gray.

For fans of The Secret History who love a bit of fantasy, The Starless Sea by Erin Morgenstern is perfect!

Zachary Ezra Rawlins is a student at Vermont University when he finds an odd-looking book in the shelves of the library. Flipping through the pages, Zachary reads story after story until he finds one taken straight from his own childhood.

Desperate to make some sense of how his memories found themselves in this mysterious book, he uncovers a series of clues that take him on an adventure that leads to an ancient library deep beneath the Earth’s surface. Zachary learns about those who protect the realm as well as those who seek to destroy it.

This book is a love letter to storytelling and those who are a fan of Tartt’s unique writing style will be sure to appreciate Morgenstern’s. This is a perfect book like The Secret History for those who want a more fantastical story.

The Goldfinch, by Donna Tartt

It may seem obvious but if you’re craving Tartt’s beautifully crafted storytelling, why not try her other book The Goldfinch? This book is the one that gave Tartt the Pulitzer Prize winner title and is praised by all.

The novel follows Theo Decker who loses his mother in a tragic terror attack at The Metropolitan Museum of Art and is left alone in New York, where he is taken in by a wealthy family friend.

In the rubble of the terrorist attack, Theo makes a decision that follows him for the rest of his life as he steals the famous Dutch painting ‘The Goldfinch’.

The story then follows Theo through the rest of his childhood as he finds himself in the criminal underworld and struggles with his loss, survival and identity.

For books like The Secret History, then look no further than Tartt’s other works!

If you’ve already read The Secret History and love a murder mystery, thriller or occult practices in your books, then this list will have something for you!

Are you looking for more books similar to The Secret History? Have any recommendations that didn’t make the list? Let us know in the comments! 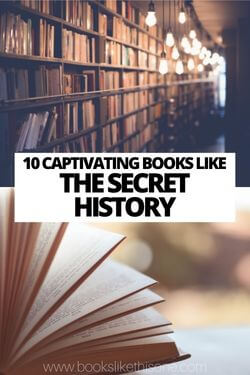