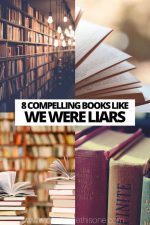 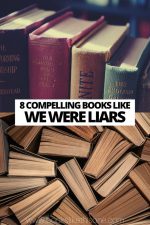 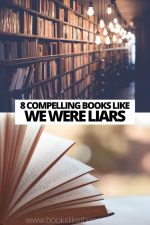 When seeking out books like We Were Liars by E Lockhart you’ll realise what an amazing collection of YA authors there are providing us with mystery’s to solve that include first love, best friend issues and family dynamics. Let’s face it; love, adolescence and families are all a bit of a mystery!

In We Were Liars, our main character, Cadence Sinclair Eastman, falls for Gat; someone she has spent many summers with on her family’s private island, Beechwood. The summers she shares with Gat and her cousins on the island are pretty idyllic apart from the underlying rift between their parents regarding the eventual inheritance of Beechwood and its estate, Clairmont.

It is summer fifteen when Cadence, fed up with the family drama, suggests to Gat and her cousins that they burn Clairmont to the ground to save any further arguments. In that same summer she has a terrible accident which leaves her with no memory of the event or any time leading up to it.

Once back home, Cadence tries to reach out to Gat and her cousins but they never respond. She is eventually allowed back to the island two years later where she begins to remember the tragedy that took place.

If you were a big fan of The Famous Five books and are looking for something a little more grown up, then read on for my list of books like We Were Liars.

Don’t Look Back is written by Jennifer L Armentrout, author of The Harbinger and Wicked Trilogy series and lover of watching bad zombie movies.

Seventeen-year-old Samantha wakes up in hospital with no memory of what happened to her. She is told that she was found in the forest after being reported missing for the last four days. Her friend, Cassie, is still missing.

Sam is desperate to find out what really happened to her and why Cassie wasn’t found with her.

When she starts piecing together her life with the help of her brother and childhood friend, Carson, she discovers she was not a nice person. She was the popular, rich kid with a dreamy boyfriend but she and Cassie were more frenemies than BFFs.

Sam wants to change and make it up to all those she hurt but before she can she needs to find out what happened to her and whether or not she had anything to do with Cassie not being found.

The more Sam discovers the more she is warned to forget her old life via intimidating notes – someone out there knows what happened.

This novel similar to We Were Liars is narrated by our protagonist allowing you to become immersed into her world to help solve the mystery.

Are you a fan of Jennifer L Armentrout? Check out our list of more books like From Blood and Ash!

The Best Lies, by Sara Lyu

This novel like We Were Liars enters the world of the best friend. That one person who gets you and your quirks; that one person you believe in no matter what.

But what if you found your best friend standing over the body of your boyfriend and she’s holding a gun?

This is what happens in The Best Lies. Remy Tsai and Elise are as close as two friends can be but when the funny, sweet Jack enters Remy’s life, the balance in their relationship shifts.

Although the police confirm it was Elise who pulled the trigger, Remy needs to investigate herself to find out if her best friend in the world; her soul mate, is telling the truth when she declares her act to be one of self-defence.

The story in The Best Lies is told between the present and past, revealing the clues for you to solve. Did Elise murder Jack?

The Leaving, by Tara Altebrando

Eleven years after their abduction, five teenagers turn up alive and well – except there were six children who went missing. What has happened to Max?

In The Leaving, none of the returned claim they have any memory of what happened to them; who Max is or whether they have been together for the last eleven years.

Their families want answers and Max’s sister Avery needs closure. She has to find out if Max is dead or alive and she’s sceptical about their convenient memory loss.

The story and clues unfold within the character’s stories of settling back into their lives and families.

There are lots of twists and turns to navigate in this mystery thriller. So if you enjoyed We Were Liars then this could be one for your bookshelf – virtual or otherwise.

In Sadie, nineteen-year-old Sadie has been struggling to take care of herself and her younger sister Mattie. Life is hard; they’re hanging on by a thread of hope – until one day it snaps. Mattie is found dead.

The police launch an investigation but Sadie doesn’t believe they are doing all they can. Things are getting missed. This is when she decides that only she cares enough to find out who really killed her sister and make them pay.

She takes to the road with the few clues she has then a radio personality West McCray who is doing a piece on small towns, is encouraged to report on Sadie’s journey via a serialised podcast. When truths and secrets are revealed, West’s only concern is that he doesn’t want there to be another dead girl.

This is an achingly moving book like We Were Liars that will have you desperate to chat to your friends about it.

The Darkest Corners, by Kara Thomas

This novel similar to We Were Liars is an unsettling psychological thriller with a back-story of self-discovery and friendship.

Tessa left Fayette, Pennsylvania after her best friend Callie’s cousin was murdered. Tessa and Callie were just seven at the time and were witnesses in the trail which sent the supposed serial killer to jail awaiting execution.

Now Tessa is back and staying with Callie while she tends her father who is ill. The girls haven’t spoken in years and they never talked about what they saw but now they need to be honest. Did their testimony put an innocent man in jail?

The whole thing didn’t quite make sense to Tessa and now she needs to know the truth. She has to face the demons of her past and deal with family issues whilst investigating whether Callie’s cousin was really a victim of the Ohio River Monster and if he is the man they sent to his death.

If you want to know how it ends, then settle down with your favourite beverage and immerse yourself in The Darkest Corners.

With Malice, by Eileen Cook

Jill Charron wakes up in hospital with a brain injury, a broken leg and no memory of what happened to her. She knows her name but struggles to find the right words when she speaks. She can’t remember anything about the last six weeks.

Jill is aching to see her best friend, Simone, as she knows that she’ll make everything seem better. Unfortunately, she is about to find out that Simone died in the same crash that put her in hospital; it happened in Italy and the Italian government are blaming her.

She needs to uncover the truth before she is extradited to Italy to face charges.

The mystery of what really happened in this book like We Were Liars is told through Jill’s point of view with the addition of a sneaky peek into witness statements, blog posts and newspaper articles.

So if you can’t remember what book you were going to read next, try With Malice.

This book like We Were Liars is the second in the series A Good Girl’s Guide to Murder.

Pip Fitz-Amobi and Ravi Singh ran a true-crime podcast last year following an old murder case they were working on involving Ravi’s brother. The podcast was a huge success but that was last year and Pip insists she is out of the detective business. That is until her friend’s older brother, Jamie, goes missing.

As with all good mysteries, not everything is as it appears and Pip needs to know why Jamie was acting odd a few weeks before his disappearance.

In this novel like We Were Liars, Pip has to follow the clues, which sometimes leads her to dark places. She’ll need her wits about her if she’s to stay safe – and sane – during this investigation.

Good Girl, Bad Blood is a fast-paced thriller; be prepared to chew your nails down to the quick. And here’s a tip when reading this one: Don’t forget to breathe!

In my last suggested novel on this list of books like We Were Liars, the mystery comes from a more philosophical place and the love element is explored in the love between true friends.

Radio Silence is the story of Frances Janvier who is an academic with a bright future. Attending Cambridge and getting a good job are high on her to-do list. But that’s not all she’s about at all; Frances’ passion is creating fan-art for YouTube podcast, University City.

The podcast is secretly run by Aled Last who struggles with depression. Frances and Aled become firm friends; bonding over their love of art and creativity.

When Aled is exposed as the creator of University City he feels betrayed by Frances assuming it was her who revealed his identity. He severs any contact with her and goes off to university. Frances is devastated at losing someone so dear to her – Aled was the only real friend she ever had. Now Frances’ world is crumbling and she realises that the future she was sure she wanted may not be the future she needs.

If you enjoyed books like We Were Liars and stories that are character-lead, then Radio Silence should be on your wish list.

There you have it, my suggested list of books like We Were Liars to keep your sleuthing brain engaged.

Are you looking for more books like We Were Liars? Have any recommendations that didn’t make the list? Let us know in the comments! 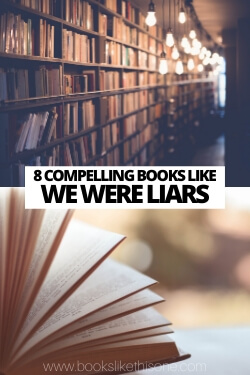