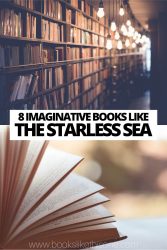 Of course, all writers have vivid imaginations in order to create, but some books like The Starless Sea are particularly so with stories, within stories, within stories so deftly woven together. Erin Morgenstern has become well known for her fantasy writing and her second novel interweaves these fantasy elements with a touch of romance.

When Zachary Ezra Rawlins discovers a mysterious looking book amongst the stacks at Vermont University, little does he realise just how much his life will change. As found within the pages of this mysterious book is a story from his very own childhood.

Readers join Zachary on an adventure to find out how his story ended up in the book and who wrote it. An adventure that takes us deep underground below the surface of the earth to an ancient library where we meet some remarkable characters helping to protect this secret archive.

For those of you who want an extra imaginative injection in your fiction then look no further than the list of books like The Starless Sea below.

Our first novel kicking off this list of imaginative books like The Starless Sea is Susanna Clarke’s second novel, Piranesi.

The titular Piranesi lives in a building called the House. The House is no ordinary house, it is made up of infinite rooms, endless corridors and thousands and thousands of different statues depicting different things, things which aren’t present in the House. All that is present in the House is clouds in the upper recesses of the building, a sea below, Piranesi and another human he calls The Other.

Working together, Piranesi and The Other search for ‘A Great and Secret Knowledge’ hidden somewhere within the House. A search that not only reveals that they are in fact not alone in the House but also throws into question everything Piranesi thought he knew about life.

Written some 16 years after her fantastic debut, Jonathan Strange and Mr Norrell, Clarke’s Piranesi is a mysterious and magical book definitely worth the wait.

If it is the literary aspects that has you reaching for novels similar to The Starless Sea or the imagined alternate universe then you are sure to enjoy Fahrenheit 451 too.

Set in an imagined dystopian future, we are introduced to fireman Guy Montag. Here books are now an illegal commodity and Montag’s job involves setting fire to any books he finds along with the houses they are found in. Montag never questioned his vocation before nor the effects his fiery actions produce, that is until he meets a young girl called Clarisse.

Clarisse speaks of the past when people talked to one another and weren’t consumed by television and digital stimulation. She regularly meets Montag and walks with him filling his head with her subversive thoughts, Montag starts to look forward to his talks with Clarisse and then she disappears, leaving Montag alone questioning everything.

A seminal piece of literature, Ray Bradbury’s Fahrenheit 451 is still as relevant and as pertinent today as it was sixty years ago when it was originally published.

Once Upon a River, by Diane Setterfield

Diane Setterfield’s third novel Once Upon a River is an atmospheric, multi-layered read brimming with mystery, intrigue, folklore and love.

Set on the Thames, the novel opens on a bleak night in midwinter where some local men are recounting folk tales to one another in an ancient inn. Their stories are interrupted when an injured stranger bursts through the doors carrying a body, that of a young girl, drowned.

Time passes and the girl begins to draw breath and magically returns to life, but how? Just as the characters in the book, we as readers get swept away with finding out the how the why and the who in this incredible novel that reveals the many secrets and mysteries the river has to tell.

If you like The Starless Sea for its rich combination of narratives then you will like these aspects of the gothic influenced Once Upon a River too.

Many books like The Starless Sea draw inspiration from other stories, myths and legends and our next novel draws inspiration from gingerbread and the place it holds in classic children’s literature, it is Gingerbread by Helen Oyeyemi.

On the surface, Perdita Lee and her mother Harriet look like your average teenage daughter and hardworking mother. Yet behind the closed doors of their gold-painted seventh-floor flat lies an intriguing family legacy, in which the inheritance is a recipe, a recipe for gingerbread.

The Lee gingerbread is most popular with a Gretel Kerchaval, one of Harriet’s childhood friends responsible for a lot of the good and bad that has happened to her since they met. On a whim Perdita sets out to find and meet Gretel little realising in doing so she will find out a lot more about her family history than she bargained for.

Bewitching, delightful, surprising and oh so satisfying are just some of the words to describe the delicious Gingerbread.

Haruki Murakami’s imagination is really in a league of its own and his 2017 novel Killing Commendatore is the perfect example with events happening across this world and another.

Recently jilted by his wife, the novel’s portrait painting protagonist goes on a road trip which leads him to take up in the mountain home of another famous artist called Tomohiko Amada. Here he uncovers a never before seen painting in the attic, a painting called Killing Commendatore picturing a scene from the opera Don Giovanni.

The discovery of the painting prompts a series of strange events to occur involving a ringing bell, a mysterious pit in the woods, a rather forward thirteen-year-old girl who disappears, a local businessman, a two-foot flesh and blood Commendatore from the painting and a visit to the underworld to stop the cycle of weirdness for good.

Dissecting themes of loneliness, love, art and war, Killing Commendatore like a lot of Murakami’s work takes patience and time but given this, readers of books like The Starless Sea are sure to appreciate the novels big ideas.

The Binding, by Bridget Collins

As we have seen some writers draw inspiration from old stories to help form their narratives while others, like Bridget Collins the author of our next book similar to The Starless Sea, create a wonderfully original premise.

The Binding slowly unravels to reveal what happened to Emmett Farmer, a former farm labourer called upon to be a bookbinders apprentice. The bookbinders in this novel are like no other though they bind unique leather-bound volumes, between the pages of each book holds the deepest darkest secrets of the beholder.

For people come to the binders to rid themselves of their most harrowing, shameful memories as once these memories are put to paper and the books bound, the event is forgotten forever. Emmett is both drawn to and fears the books until one day he finds one with his very own name on and deigns to remember what he was seemingly forced to forget.

The Binding is an enchanting and evocative read, the blend of the gothic setting, the believable characters and startling narrative makes it a read worthy of your time.

Erin Morgenstern is often likened to another fantastical powerhouse – Neil Gaiman. Any number of his books would make a worthy addition to this list of novels like The Starless Sea, but I have chosen Stardust for its myriad of characters our hero meets on his surprising quest for love.

Tristran Thorn lives in the walled village of Wall, designed so to keep the inhabitants of Wall in and the weird and wonderful characters of the neighbouring Faerie out. The wall is only ever usually crossed when a magical market comes to town once every 9 years.

In a bid to impress Victoria Forester, Tristran vows to catch a falling star heading for Faerie and embarks on a fantastical journey across the wall. Little realising that in Faerie, stars are valuable to many, many people including a coven of witches and three brothers battling it out to be the next king.

If you are looking for your next escape, to be transported to another world then give the hilarious and inventive Stardust a read.

The Water Dancer, by Ta-Nehisi Coates

Sometimes it can be difficult for a novel to be fantastical and otherworldly while also dissecting important themes, but in Ta-Nehisi Coates’ first piece of fiction, he succeeds. It is his devastatingly beautiful 2019 novel The Water Dancer.

Hiram Walker was born into slavery, though he has a photographic memory he cannot remember his mother who was sold when Hiram was young. Along with his photographic memory, Hiram has another power he calls conduction which grants him the ability to travel across large areas via water.

Conduction fills Hiram with a sense of purpose to rescue the rest of his family and an urgency to be free. We follow his escape from Virginia’s plantations to help out on the Underground Railroad and his journey through to Philadelphia where he meets other abolitionists such as Jarm Lodge and Harriet Tubman.

The Water Dancer is equal measures magical, heartbreaking and important, the insightful and inventive narrative make it not only the perfect novel for anyone looking for their next read but also the perfect way to finish off this list of books like The Starless Sea.

There we are, 8 imaginative books like The Starless Sea. There are of course plenty that could have been listed here but these take you on journeys to other worlds, with characters to root for they are creative and the perfect way to while away the remaining summer days.

Are you looking for more books like The Starless Sea? Have any recommendations that didn’t make the list? Let us know in the comments! 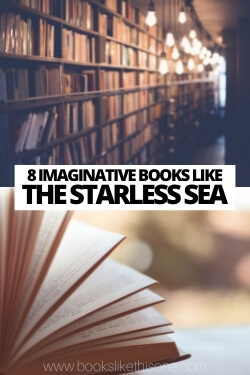