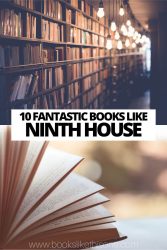 Books like Ninth House are full of magic, secrets and not to mention a strong, female character to follow throughout the pages. In this fantasy mystery, we follow Alex Stern as she navigates the halls of Yale after being offered a place in the school’s freshman class to investigate its secret societies.

This all comes after Alex found herself the only survivor of an awful, unsolved multiple homicide. Now tangled up in occult activities full of magic and murder, Yale’s rich and powerful students are far deadlier than she ever imagined.

This thrilling read is a great dark academia style novel intertwined with fantasy elements but if you have already read this one, you might be looking for other books akin to it. If so, look no further and enjoy this list of ten books to read if you’ve finished Ninth House!

If We Were Villains is a popular mystery thriller perfect for those looking for a book similar to Ninth House.

Set at the elite art school, Dellecher, we meet seven theatre students in their final year who are set to perform in Shakespearean tragedies. The students immerse themselves in the rivalries, violence and tragedy that the plays they study portray, so much so it begins to merge into their real lives and relationships.

Years later, Oliver, one of the students, reflects on the murder that occurred in that time – one he spent ten years in jail for – whilst the detective who was on the case sets out to find what truly occurred that night at Dellecher.

Also set at a prestigious school, following students wrapped up in murder and death, this is a great and thrilling read.

The Atlas Six, by Olivie Blake

The Alexandrian Society is a secret. Containing the best magical academicians in the world, the society aims to oversee the preservation of knowledge and secrets of ancient civilizations. Those lucky enough to become a member are granted a life of wealth, knowledge and status.

Though becoming a member is a hard feat as only six of the greatest magicians are selected every decade for initiation. After a year of brutal initiation tests, only five will be recruited into the society – if that many survive.

Perfect for fans of books like Ninth House, The Atlas Six is a perfect replacement read full of magic and brutality with the addition of some great romance.

A Deadly Education, by Naomi Novik

Much like Ninth House where making the wrong move may end in your or someone else’s death, A Deadly Education is set at Scholomance, a school where failure means meeting your untimely end.

Schooling is simple with no teachers, no holidays and no friends as the aim is simply to survive until you graduate. As long as you are smart enough to never walk alone and keep away from the monsters that lurk in the shadows, you will be prepared for life at the school.

When student El arrives with a dark power strong enough to wipe out all the monsters, survival is easy for her. The problem for El is making sure she doesn’t kill anyone else in the process.

A magical tale, this urban fantasy is perfect for those looking for books like Ninth House.

Written in beautifully seductive prose, The Night Circus is a wonderful book like Ninth House full of magic and mystery. Le Cirque des Reves arrives in the dark, without any warning and only opens its doors to guests after the sun has set.

Pitted against each other by their mentors who, for centuries, have been fighting a war by proxy, Celia and Marco find themselves in competition with one another. Trained since childhood for this magical battle where only one will survive, the two make a grave mistake: they fall madly in love.

With the fate of the circus and its inhabitants resting in the outcome of the competition, a decision must be made. One or the other.

A Discovery of Witches, by Deborah Harkness

In A Discovery of Witches, young scholar Diana is a witch who wants nothing to do with sorcery.

But when she accidentally finds an old manuscript in the library, she unwittingly unleashes daemons, witches and vampires who all descend upon the library in search of the coveted treasure.

And now, Diana is the only one who can break its spell. Surrounding academia and the magic that surrounds coveted knowledge, this book like Ninth House is an entertaining read full of romance and adventure with a smart and strong female protagonist.

In this dark urban fantasy, we meet Kate and August.

Kate is ruthless and vicious whereas August is kind and looks for the good in people. Set in the war-torn city of Verity, the violence has begun to create actual monsters who roam the city and cause chaos, threatening to overrun what is left of Verity.

The city is divided into two, each side run respectively by Kate and August’s fathers, whose children are both desperate to prove themselves. When Kate finds out what August truly is, an assassination attempt leaves them running for their lives.

This Savage Song is the perfect read for fans of Ninth House who want something more embedded in the fantasy genre.

The Magicians, by Lev Grossman

A book similar to Ninth House, The Magicians follows a young man practising magic in the real world. When Quentin Coldwater is unexpectedly admitted to a very secret and very exclusive school of modern sorcery, his entire life changes.

After growing up on tales of a magical yet fictional land named Fillory, his dreams of learning magic are finally coming true yet the school isn’t exactly what he had hoped it to be. So when Quentin learns that Fillory is actually a real place, he is disappointed when he realises that it is a much darker and more dangerous place than he ever imagined.

Although this book is not set in a magical school, it is set within a magical game where real life and the performance of Caraval being to blur into one.

Caraval is a show within which the audience participates but you never know who is performing and who isn’t, what is real and what isn’t. Scarlett Dragna has dreamed of her invitation to the game for years and finally, it has arrived.

However, this dream is twisted when her sister, Tella, is kidnapped and the first one to find her will be crowned the winner. But if no one finds her, Tella will disappear forever. Not knowing who to trust, Scarlett must navigate Caraval by herself.

A magical tale of sisterhood and romance, Caraval is perfect for lovers of Ninth House who want something more lighthearted whilst having a good mystery to keep you on your toes!

For a more lighthearted read than Ninth House, try picking up Rainbow Rowell’s Carry On. In this queer, enemies-to-lovers story set at Watford School of Magicks, we meet Simon Snow.

If that wasn’t enough, now a monster with Simon’s face is on the loose, eating up all the magic.

Set at a school seeped in magic, this book like Ninth House is perfect for those wanting a similar read.

A Lesson in Vengeance, by Victoria Lee

Dalloway School is Felicity Morrow’s second home but it is also where her girlfriend passed away tragically a year ago. Now, she has to return once more to finally graduate from the school.

Felicity lives in Goodwin House, renowned for being home to the Dalloway Five: five girls who mysteriously died one after the other on the building’s ground and now haunt its halls.

Witchcraft and occult activities are woven into the school’s history but wanting to leave that in the past, Felicity is reluctant to help first year prodigy writer, Ellis, when she asks Felicity to help her research the Dalloway Five.

But when history beings to repeat itself and more girls begin dying, Felicity has no choice but to face the past. Another occult-based academia novel, A Lesson in Vengeance is an excellent book similar to Ninth House that will have you on the edge of your seat.

Books like Ninth House are magical and deadly. Full of mystery, winding corridors and strange schools, these books will transport you into another world entirely and keep you turning page after page. I hope you found your next five star read in this list!

Are you looking for more books like Ninth House? Have any recommendations that didn’t make the list? Let us know in the comments! 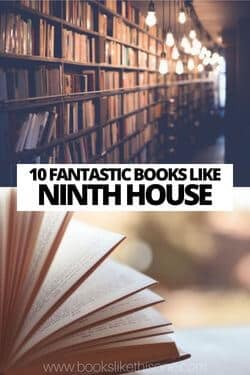