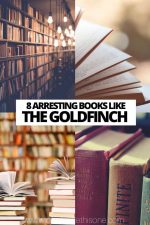 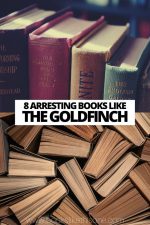 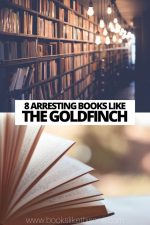 At a whopping 771 pages long, Donna Tartt’s Pulitzer Prize-winning novel The Goldfinch is neither quick or easy to read, however, the intricate and innovative plot pulls you in until the very end, therefore it isn’t surprising that people are scouring shelves for more books like it.

A coming of age story told retrospectively through the eyes of protagonist Theo Decker, a survivor of a devastating terror attack on The Metropolitan Museum of Art which sadly kills his mother.

While navigating the wreckage, he sees the famous dutch painting ‘The Goldfinch’ amongst the rubble and impulsively takes it, an act which will haunt him for the rest of his life as much as the fateful loss of his mother. After the explosion we follow his turbulent childhood, descent into the underworld art scene, struggles with addiction and the many characters he meets along the way.

The books like The Goldfinch listed below are also multifaceted, they raise questions about the mysteries of life and fate, their complex plots twist and turn, you evolve alongside their characters and just like them, you are not quite the same once you reach the end of the book.

Told in a similar vein to The Goldfinch, Jonathan Safran Foer’s Extremely Loud and Incredibly Close is narrated by nine-year-old Oskar Schell following the death of his father who is killed in the September 11th attacks on the World Trade Centre.

Oskar is a very particular young boy, he has principles as a vegan, he’s a romantic letter writer, an inventor, historian and naturalist among many many other things.

But when he tragically loses his father, Oskar soon adds detective to his bow as he sets out to solve the mystery of the inexplicable key that he finds in his father’s belongings. A mystery which will lead him on a journey around New York, delving into the lives of strangers, deep into history and to find some sort of peace.

The novel touches on sudden loss and the immense strain this puts on a child and is reminiscent of Theo’s struggles, therefore, those looking for books similar to The Goldfinch are sure to be compelled by Oskar in Extremely Loud and Incredibly Close, too.

If you like The Goldfinch for the explorations into fate and how the course of one’s life could’ve been completely different should a single decision or choice have been made (or not made), then you are sure to like Kate Atkinson’s Life After Life as well.

Ursula Todd has a unique gift; she seems to have an infinite amount of lives for as she grows she also dies only to be reborn in the same circumstances each time afterwards. In the first 100 pages of the book alone Ursula lives and dies at least five times including getting shot in the head by Nazi henchmen and being strangled by her own umbilical cord.

Once Ursula realises her unusual gift, she uses it for the good of humanity which includes a run-in with Adolf Hitler! Life After Life is a novel of great complexity and an ingenious idea from the award-winning Atkinson, a complete rollercoaster of a read that fans of Tartt will enjoy.

Two-time Booker Prize Winner Peter Carey invites us into the bizarre and fascinating world of Michale Boone, an ex- ‘really famous’ painter and his younger brother the childlike and volatile Hugh, in his feverishly gripping novel Theft: A Love Story.

Michael once lived the life of a renowned painter; creative, glamorous and fabulous, now he finds himself in the remote countryside acting as caretaker for his demanding younger brother and living in the home of one of his biggest collectors.

Life isn’t so bad and they manage to get by, yet little do they realise how much their little equilibrium will be upset when the beautiful and mysterious Marlene, daughter-in-law of the late great artist Jacques Liebovitz, arrives on their doorstep one evening during a rainstorm.

Told in the alternating perspectives of the brothers, Carey creates an insanely original plot but also incredibly fascinating characters in this work of genius. If you like the art and antique deals in The Goldfinch then you are sure to be enthralled by Theft: A Love Story too.

The Little Friend, by Donna Tartt

If you are looking for more novels like The Goldfinch there is a strong chance you will enjoy any book by Donna Tartt with her poetic sense of style and demanding plots.

The Little Friend was written before The Goldfinch and is her second novel, on the surface the story seems like just an adventure mystery but deep within Tartt explores themes of grief, loss, obsession, retribution and the innocence of childhood.

When nine-year-old Robin Cleve Dufresnes is found hanging from a tree in his garden the shock of his unexplainable death shatters his family. Twelve years after the harrowing incident, the murder is still unsolved, Harriet the youngest of the family becomes obsessed with finding out what happened to her brother and unmasking his killer once and for all.

Her mission for the truth leads her into the intricate web of drug gangs in the deep south and gets her entangled in the race and caste relations of the town. The Little Friend is another ambitious novel with a plot that just keeps pulling you in, the only way Tartt knows how.

Are you a fan of Donna Tartt? Check out our list of books like The Secret History!

All The Light We Cannot See, by Anthony Doerr

Another Pulitzer Prize winner to grace this list of arresting books like The Goldfinch is Anthony Doerr’s All The Light We Cannot See. An utterly bewitching story about the lives of a German boy called Werner and a blind French girl named Marie- Laure during the Second World War and how their lives inextricably interweave.

When France is invaded by the Germans, a young Marie-Laure takes refuge with her Great Uncle Etienne, a reclusive war veteran who spends his time broadcasting records of his dead brother across the radio which Marie-Laure soon becomes intrigued by.

Whereas Werner is enlisted into a Nazi boarding school where his technical talent at repairing old radios is discovered and earns him a place tracking illegal enemy signals for the Nazis. During an operation, Werner gets trapped beneath piles of rubble and stays alive without food or water for days, and survives by listening to Marie-Laure broadcast her stories in Braille using her Uncle’s radio.

Doerr’s writing is so richly detailed it is almost hypnotic, All The Light We Cannot See is a heartwarming and deeply affecting novel with a plot to rival that of Tartt.

Already read this novel? Check out our list of more books like All the Light We Cannot See.

Life of Pi, by Yann Martel

Yann Martel said he wrote Life of Pi because he was looking for a story that would direct his life, in doing so I think he has created a novel that directs the lives of a lot of others too.

Classed as a philosophical novel, it is narrated retrospectively by Piscine ‘Pi’ Molitor Patel as he ruminates on one of the most enduring experiences of his life; being lost at sea for 227 days with a Bengal tiger called Richard Parker.

Following a state of emergency in India, Pi’s family decide to sell their zoo in Pondicherry and emigrate with their animals to Canada for safety. But tragedy strikes when the Japanese freighter sailing them to Canada gets caught in a horrific storm and sinks, Pi’s family and most the animals drown except an orangutan, zebra, hyena and Richard Parker who all join Pi in a life raft.

It is a story of survival and explores the nature of reality and our perception of the stories we are told, it is these philosophical undertones which make Life of Pi an interesting read for anyone looking for more books similar to The Goldfinch.

The Miniaturist, by Jesse Burton

If it is the deftly woven plot and detail that has you on the hunt for more books like The Goldfinch then look no further than Jesse Burton’s stunning debut novel The Miniaturist.

Excited to start her new position in life as a wife, Nella Oortman arrives at the magnificent home of her new husband Johannes Brandt, an illustrious merchant trader.

Nella quickly becomes disappointed that wedded life is nothing quite like she imagined, Johannes though pleasant remains distant from her locked away either in his study or at work, which leaves Nella at the hands of his bitter and unreasonably strict sister Marin.

The only pleasure she gets is from furnishing the cabinet-sized model of their house which Johannes gave her as a wedding gift, a task which requires the skills of a miniaturist. Yet even this pleasure turns sour when the replicas from the miniaturist start imitating secret goings-on in the actual house in unexpected and startling ways, unravelling these secrets to catastrophic effect.

Set in the repressive Amsterdam of 1689, The Miniaturist is a haunting story of betrayal, truth, love and keeping up appearances, seeped in so much secrecy it is a compulsive read.

Girl With a Pearl Earring, by Tracy Chevalier

I couldn’t put together a list of novels like The Goldfinch without a nod to some other Dutch artistry which is why I have included Tracy Chevalier’s Girl With a Pearl Earring, a beautiful and original story behind one of Johannes Vermeer’s most magnetic paintings.

The novel’s focus is on Vermeer’s house in Delft and his blossoming relationship with hired servant Griet. Set in a similar period as The Miniaturist and narrated by Griet, she describes the evolution of their relationship as she goes from his servant to his artistic assistant grinding his paints and mixing his colours before ultimately sitting to model for him.

Their growing relationship puts strain on the household to the point where Griet is forced to leave never to see Vermeer again and only seeing his painting of her after his death. Themes of creativity and the admiration of art and beauty are apparent throughout the novel and what makes the Girl With a Pearl Earring such an absorbing story.

Books like The Goldfinch truly demonstrate the remarkable talent of the authors; the complexities of the narrative, the imaginative plot ideas and the many many levels they speak to us on, they are all truly wonderful books to get swept up in. 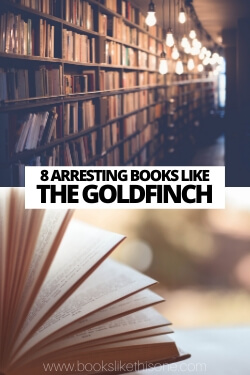