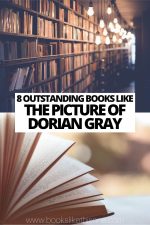 Despite their age, books like The Picture of Dorian Gray still explore themes that are relevant and hotly disputed today. In the case of Oscar Wilde’s 1890 novel, he dissects the relationship between beauty and morality, art and imitation of life, the negative consequences of influence and the superficial nature of society which he does through the charming, handsome (and corruptible) Dorian Gray.

Easily influenced by a new friend Lord Henry Wooten, Dorian sells his soul in exchange for remaining young and handsome, exactly the way he looks in a painting he recently sat for. So it was agreed, the aforementioned painting would age and show all the signs of decline and abuse from his hedonistic lifestyle while Dorian himself would continue to look as young and handsome as ever.

But, like all deals with the devil things never go well for long.

A truly bewitching read, fortunately there are plenty of books like The Picture of Dorian Gray to choose from. This list comprises of a mixture of classic Victorian literature along with books which dissect similar, relevant themes all of which I am sure you’ll enjoy!

The Hunchback of Notre-Dame, by Victor Hugo

Our first novel feels particularly poignant given the fire which broke out in the titular Notre-Dame in 2019 as Victor Hugo also wrote The Hunchback of Notre-Dame when the cathedral was in a state of disrepair following the French Revolution. Steeped in tragic irony, this supreme structure is at the novel’s heart as are themes of jealousy, determination, revolution, social strife, prejudice, sacrifice and above all else love.

Quasimodo, the eponymous hunchback hard of hearing from years ringing bells, becomes embroiled in the motives of the Archdeacon Claude Frollo and Kings archer Phoebus de Chateupers who each wish to marry the young and beautiful Romani girl Esmerelda. Esmerelda teaches us not to judge people by their appearances and Quasimodo’s stop at nothing for love is a true inspiration on selflessness.

Though a lot of the themes explored by Hugo in his remarkable novel The Hunchback of Notre-Dame are seemingly opposite to those presented by Oscar Wilde, there is still plenty that readers of books like The Picture of Dorian Gray will thoroughly enjoy.

The House of Mirth, by Edith Wharton

One character who I am sure wouldn’t mind a similar deal with the devil as Dorian Gray is Edith Wharton’s pitiful Lily Bart from her 1905 novel The House of Mirth.

Lily is beautiful, charming and the object of many men’s desire, but in New York high society you need a bit more than just charm and beauty on your side. Money, for one, and Lily’s is in steep decline, the right friends around you and Lily’s are also in steep decline and youth which again is also declining.

Lily is fast approaching 30, she is unmarried and, though innocent enough, has been seen with the wrong men one too many times, with rumours circulating Lily steadily loses everything and ends up out of touch and out of favour with society.

Though satirical like a lot of Wharton’s work, she expertly portrays the pettiness of life in high society and the role, or lack thereof, of unmarried women during this time. This superficial nature of society (through Wharton’s astute gaze) is why fans of novels like The Picture of Dorian Grey will thoroughly enjoy The House of Mirth too.

We move further on to the Gothic side in this next book similar to The Picture of Dorian Gray with the eternally influential Dracula by Bram Stoker.

Written in a fragmentary narrative via letters, diary entries, telegrams, ship’s logs and newspaper articles we are introduced to Count Dracula, a wealthy Transylvanian nobleman (and centuries-old vampire).

The story follows his attempt to move from Transylvania to England in search of fresh blood and to spread his vampiric curse. Jonathan Harker, a recently qualified solicitor, is hired by the Count to help process the move and provide legal support.

From Harker we learn the Count is handsome, intelligent and charismatic, a visage which doesn’t last too long as a string of mysterious deaths and unexplained disappearances start occurring the same time the Count makes his way to England.

So much more than a scary vampire novel, Stoker’s Dracula is an exacting depiction of the darker sides of human nature, good versus evil, the power of money and an insight into the supernatural – not just for Halloween or horror lit lovers!

We couldn’t put together a list of books like The Picture of Dorian Gray without including the story of the original devilish deed, Christopher Marlowe’s Doctor Faustus.

Based on German legends about the titular character Faust, the story remains the same, a man sells his soul to the devil in exchange for something. In this story, the man is a German Doctor (Faustus) who has grown tired of the limitations of traditional forms of knowledge such as law, religion, medicine and so decides to begin practising magic.

After learning the Dark Arts, Faustus is able to summon the demon Mephistopheles who warns him of the misuse of such magic which prompts Faustus to offer up his soul to Lucifer in exchange for Mephistopheles’ service for twenty-four years.

Over these twenty-four years, Faustus travels widely and is showered with gifts and books on magic by Mephistopheles but like all good things, devilish deals must also eventually come to an end.

Though it is a play and there are plenty of other books out there based on Faust, I particularly like Marlowe’s reckoning of the story in Doctor Faustus.

The Phantom of the Opera, by Gaston Leroux

As with a lot of novels like The Picture of Dorian Gray, some supernatural elements are injected into the narrative and the same can be said for Gaston Leroux’s perennial classic The Phantom of the Opera a fantastic story of love, jealousy, appearances and magic.

Set in a Parisienne opera house in the 1880’s that is said to be haunted due to a number of strange goings on such as suspicious suicides, chandeliers falling from ceilings, company disappearances and voices breaking in the middle of librettos among so much more.

Said to be the work of The Opera Phantom, who the narrator assures the reader exists, the story centres around Christine Daaé, a lesser-known soprano of the opera. We learn how after her father died he promised that the Angel of Music will look after her and protect her little knowing this “Angel of Music” would look after her a little too well.

Though there have been many adaptations of the story and there is no denying how influential the novel is, Leroux’s original The Phantom of the Opera is by far the deepest and darkest of them all and a pure joy to read.

The Curious Case of Benjamin Button, by F. Scott Fitzgerald

If it is the aspects of beauty and one’s unwillingness to age that has you looking for more novels similar to The Picture of Dorian Gray then you are sure to enjoy F. Scott Fitzgerald’s fantastical and satirical novella The Curious Case of Benjamin Button; the man famous for ageing backwards.

In 1860 Benjamin Button is born an old and decrepit man, withered and worn out. But as the years go by and he grows younger he starts being able to embrace everything that life has to offer but in reverse order, he starts a business, falls in love, has children, goes to Harvard University, then back to school and kindergarten before relying on the care of a nurse once more.

Sharp and intuitive like most of Fitzgerald’s work, if you love a classic then The Curious Case of Benjamin Button by one of the greatest voices in American literature, should be your next read.

As with a lot of books like The Picture of Dorian Gray, they have to be doing something right to still be considered relevant and speak to us on so many levels today and our next novel does just that with regards to gender relations, anxiety and uncertainty, love and self-sufficiency. It is Charlotte Brontë’s classic novel, the revolutionary Jane Eyre.

A bildungsroman telling the story of the eponymous Jane as she battles through the many struggles that life throws at her. From enduring her abusive Aunt, the terrible conditions at Lowood boarding school, her heartbreak as a Governess for Edward Fairfax Rochester, to ultimately finding love and acceptance.

Revolutionising prose fiction, Brontë was one of the first writers to really utilise the intimacy of the first-person perspective by depicting Jane’s spiritual and moral development.

If you like reading to escape, then novels like The Picture of Dorian Grey and Jane Eyre are perfect thanks to their complex storylines and powerful imagery.

The Strange Case of Dr Jekyll and Mr Hyde, by Robert Louis Stevenson

There are many aspects in The Strange Case of Dr Jekyll and Mr Hyde which readers of books like The Picture of Dorian Gray will enjoy; morality, class, appearance versus reality and the dualities of human nature to name a few.

First published in 1886, we are introduced to a London lawyer named John Gabriel Utterson called upon to investigate the strange occurrences going on between his old friend the esteemed Dr Henry Jekyll and a seemingly evil character who goes by the name of Edward Hyde.

At first, Dr Jekyll informs Utterson that he can be rid of Hyde whenever he wants and not to interfere, but it quickly becomes apparent that this is unfortunately not the case…

A true literary feat, though many know Robert Louis Stevenson’s story thanks to the many adaptations (even the phrase “Jekyll and Hyde” entered the vernacular to describe characters of dual personalities), The Strange Case of Dr Jekyll and Mr Hyde is well worth your time and the space on your bookshelf.

There we are, a selection of outstanding books like The Picture of Dorian Gray all of which have stood the test of time, are widely adored and incredibly influential, there is something for lit lovers across the genres to enjoy.

Are you looking for more books like The Picture of Dorian Gray? Have any recommendations that didn’t make the list? Let us know in the comments! 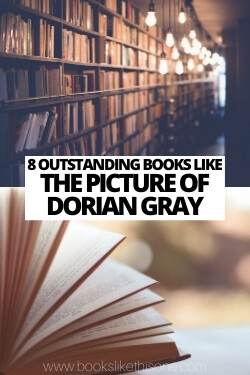