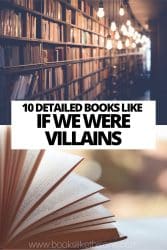 Books like If We Were Villains have the ability to transport you into another world entirely with their rich details, intricate worldbuilding and enthralling plots.

If We Were Villains is a dark academia-themed mystery thriller story about the power that words can hold. The book stars Oliver Marks, who has just served ten years in prison for the murder of one of his closest friends – one he may or may not have even committed.

Ten years ago, Oliver and his group of seven friends were attending an elite arts college where they studied Shakespeare. The roles they play reflect their roles in real life so when the casting is changed and the secondary characters begin to upstage the stars, things spin out of control until a body is found.

Now, the remaining friends have to use their acting skills to convince the police and each other that they are not murderers.

If you have already read If We Were Villains, then you might be looking for more thrilling books that capture the dark academia aesthetic. Continue reading for a list of ten similar books for you to pick up and enjoy!

Another book similar to If We Were Villains full of dark academia themes is Ninth House by Leigh Bardugo, author of the Shadow and Bone trilogy.

This mystery starts with Alex Stern who finds herself the sole survivor of an unsolved, bloody multiple homicides. Whilst recovering in her hospital bed, Alex is offered a place at Yale in their freshman class with all expenses paid.

It seems too good to be true which is why she is unsurprised when there is a catch; she is tasked with looking into Yale’s secret societies where the rich and powerful students frequent.

The deeper she gets into these societies, the worse their occult activities become.

Soon, Alex is waist-deep in sinister and extraordinary pursuits.

The Atlas Six, by Olivie Blake

Set in a fantasy world where magic is real, The Alexandrian Society is a secret society of (the best) magical academicians. The aim of the society’s members is to oversee the care of the lost knowledge of ancient and great civilizations.

People lucky enough to become a member are gifted a life of wealth, power and status. Every decade, six of the most talented magicians are selected for initiation.

The initiates are required to spend a single year together with access to the archives. After a year, five will be recruited, if they survive that is.

A unique world full of morally ambiguous characters, libraries of your dreams and palpable sexual and romantic tension, The Atlas Six is the perfect book like If We Were Villains for those looking for a replacement.

Victor and Eli are two roommates in college who are in their senior year.

Their friendship founded on their similar taste is put on the line when they take part in increasingly crazy and experimental research on how, under the right circumstances, a person could develop supernatural abilities.

However, when this academic research turns practical, things go awry. Ten years pass and Victor breaks out of prison determined to find his old roommate. Both men have great power and as the friends turned foes face one another, it is a question of who will live.

If you like one-on-one battles involving magic and the supernatural as well as murderous revenge plots, Vicious is the perfect book like If We Were Villains for you!

The Secret History, by Donna Tartt

A must-read for every dark academia book lover is Donna Tartt’s The Secret History.

Set in 1980s Vermont, we follow a group of students studying Ancient Greek at an elite liberal arts college under the tutelage of the eccentric Professor Julian Morrow. The newest member of the group, Richard Papen, narrates the story following their activities involving ancient rituals.

When their activities get out of hand, one of their friends, Bunny, ends up dead. Soon, the group begin to turn on one another and their lives start to fall apart.

Full of corruption and betrayal, this morally grey story will satisfy your cravings for books similar to If We Were Villains.

A student in a highly selective MFA fiction writing program, Samantha couldn’t feel more of an outsider. As a scholarship winner, she is a stark contrast to the rich and unbearable clique of girls who make up the rest of her course.

However, when she is invited to one of the Bunnies’ ‘Smut Salon’ something against her better judgement convinces her to go – leaving behind her only friend, Ava, at the same time.

Spending more and more time with the Bunnies and at their off-campus ‘workshops’ which are truly rituals where they conjure the monsters in their imaginations, the line between fiction and reality begins to blur.

A story of female friendship and the power of our imagination, Bunny is a great next read.

Ace of Spades, by Faridah Àbíké-Íyímídé

First, there is Devon, a talented musician who hides in rehearsals but everyone’s eyes are on him when private photos are leaked.

Then there is Chiamaka, whose Head Girl status means everything to her but power comes at a price – one that everyone now knows about.

The game Aces is playing is a dangerous one and soon it becomes obvious they are planning something much larger than just high school.

Pick up Ace of Spades for your next book like If We Were Villains.

For readers who love the Ancient Greek and academic aspect of dark academia, The Song of Achilles is the perfect read.

The book is an emotional and poignant retelling of the story of the Greek hero, Achilles, from the point of view of his best friend, Patroclus.

Patroclus is exiled by his own father after accidentally killing a boy of noble birth. But soon, he finds himself falling in love with the skilled and attractive demi-god, Achilles.

This romantic tragedy is the perfect tale and refreshing take on one of the old classics and a great read for those looking for a book like If We Were Villains.

A group of boys at Welton Academy find their lives changing for the better when they get a new English professor named John Keating.

By introducing the boys to all sorts of famous and talented poets such as Shelley, Byron and Keats, they learn about living life in the moment.

This leads to the resurrection of the Dead Poets Society where the boys let their minds and passions run free. But with freedom, sometimes comes with a price and tragic consequences.

A story of finding and maintaining one’s individuality, the Dead Poets Society is a great book similar to If We Were Villains that captures the dark academia spirit.

Gallant is another book by V.E. Schwab for the list!

Olivia has grown up in Merilance School for Girls with no family except her mother’s journal which seems to just spiral into madness. Then suddenly a letter arrives that invites Olivia back to Gallant, her home.

However, when she arrives, no one is expecting her.

Olivia begins to see half-formed ghostly figures and her cousins are hostile and totally uninviting. Then, she finds a place that is Gallant yet not where the ghosts are full-bodied and the manor is desolate.

A mysterious figure rules over the manor and Olivia has a choice: to protect the world from his rule or take a place beside him.

If you like the mysteriousness of If We Were Villains, then you’ll love this fantasy!

A Lesson in Vengeance, by Victoria Lee

In A Lesson in Vengeance, Felicity Morrow has not been back to Dalloway School since her girlfriend passed away tragically a year ago.

Now, she is returning to the place she used to call home to graduate. Back in her old room in Goodwin House, there are rumors of five ghosts who haunt the building named the Dalloway Five.

Each of the girls mysteriously on the house grounds one after the other – some suggest it was witchcraft.

The school’s occult history is everywhere as girls gather in dark rooms but Felicity wants to leave that all behind after last year. Asked to help first-year and prodigy novelist Ellis Haley research the Dalloway Five for the girl’s second book, Felicity can’t say no.

But soon history begins to repeat itself and she’ll have to face the darkness after all.

If you have already finished If We Were Villains and are looking for your next good read, I hope you have found something you like in this list above. Filled with all the dark academia and tense mystery thrillers, these books are a great replacement!

Are you looking for more books like If We Were Villains? Have any recommendations that didn’t make the list? Let us know in the comments! 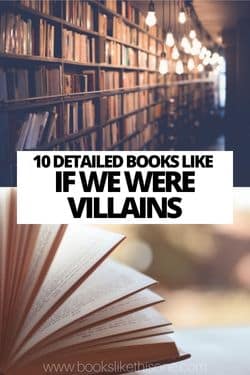