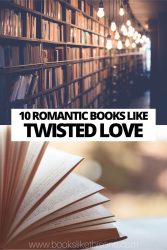 Books like Twisted Love provide readers with exhilarating romances that keep us glued to the pages.

Alex Volkov is a cold and conniving man who is haunted by his own past, constantly on the hunt for vengeance against those who wronged him. His impenetrable heart has no room for love or relationships, that is until Ava Chen reenters his life.

Ava is his best friend’s sister and his complete opposite in nature. Optimistic and warm-hearted, despite being plagued by nightmares from a childhood she barely remembers, she is everything Alex is not.

Somehow, despite their differences, a tension lingers between the pair – something strong and deadly that could save or destroy them both. This exciting romance is a great read but if you have already read this, you may be looking for something similar instead!

Well, look no further as I have compiled a list of ten other books you will enjoy if you loved Twisted Love.

Love and Olive Smith don’t go together. It’s not that Olive is unlucky in love but more that she doesn’t believe in love and long-term relationships. She is more interested in her scientific studies, determined to finish her third year in her PhD.

But her best friend is convinced she needs a man in her life and to get Anh off her back, she kisses the first man she sees.

Adam Carlsen is an aloof and stern young professor who, amused, decides to keep up with the charade. However, that means spending more and more time together and when things start to go wrong for Olive, she finds Adam always has her back.

Soon, Olive and Adam find it hard to distinguish their fake feelings from the real ones and Olive isn’t quite so adamant that a relationship is off the cards for her future.

The Love Hypothesis is the perfect book like Twisted Love with its intense romance and uplifting, heartwarming main duo.

A slow-burn romance with morally grey characters and gritty themes, The Foxhole Court is a great read for fans of Twisted Love.

Neil Josten has been on the run for years, from the one man who was supposed to love and raise him. His father is known as the Butcher, a brutal and murderous crime lord who has searched high and low for Neil.

Neil has had many names and lived many lives due to this but when he gets the chance to play on the Palmetto State’s Exy Team, he can’t pass up the opportunity.

Upon arrival, someone from his past is already there, someone he had a deep connection with, and in addition to the fame that comes with being on the Exy team, Neil’s past is catching up with him.

This upbeat and comedic rom-com is perfect for fans of books similar to Twisted Love who want something a little more lighthearted.

Piper Bellinger is followed by the paparazzi wherever she goes, entertaining them with her wild endeavours and fashion statements. After drinking too much booze, Piper ends up in prison and on the news which is the final straw for her stepfather who decides to cut her off.

He sends Piper to Washington to run the family’s bar. There, she meets gruff and grumpy sea captain, Brendan, who thinks Piper is too soft and doted on.

In her determination to prove her stepfather and the captain wrong, she finds herself enjoying the quieter life and spending time with Brendan more than she ever imagined.

Pick up It Happened One Summer for your next great read!

Have you already read this book? Check out our list of books like It Happened One Summer!

In The Spanish Love Deception, Catalina has four weeks to find a date willing to fly to Spain for her sister’s wedding. Not only that, but the willing man must pretend to be her American boyfriend after a little white lie spiralled out of control.

The only man who has offered to join her across the sea is Aaron Blackford.

The only problem is Cat hates Aaron Blackford. But soon, she realizes he may be her only option and that spending time with Aaron isn’t half as bad as she thought it would be!

This fabulous enemies-to-lovers and fake-dating trope novel is perfect for fans of books like Twisted Love who want to laugh out loud and indulge in serious romantic tension.

Much like in Twisted Love, the romance that evolves between Lucy and Josh in The Hating Game is completely unexpected yet intense. It is said that there is a fine line between love and hate which is never as true as it is for Lucy Hutton and Josh Templeman.

This office romance begins when Lucy and Josh start a game between one another. A big promotion has come up and they are both going for it, and whoever wins gets to be the other’s boss. But if she loses, Lucy has no intention of letting Josh become her boss and plans on resigning.

But everything changes when the pair share an intimate and steamy kiss in the elevator and soon, they begin to realize just how much their hatred for one another has dwindled into something far different.

.A perfect book similar to Twisted Love if you’re looking for more to read!

The No-Show, by Beth O’Leary

When three women, Miranda, Siobhan, and Jane, are all stood up on the same day, none of them realize it is the same man who has left them on their own. To make matters worse, it’s Valentine’s Day!

Yet somehow, these women let it pass after an apology and each one of them are one step away from falling in love with an unfaithful man. Before their hearts are shattered, they must figure out the truth of what he is hiding.

The No-Show is a clever rom-com that is perfect for lovers of books similar to Twisted Love!

In Confess, Auburn meets artist Owen, she doesn’t expect to fall madly in love with him. After a shattering heartbreak, Auburn puts everything on the line when she lets Owen take a hold of her heart.

But soon, she finds out Owen has a secret, one that could derail everything. Now, she has to decide what matters more, the peaceful life she dreams of or having Owen in her life?

This intense and thrilling romance filled with real-life confessions should be your next read if you loved Twisted Love!

The Duke and I, by Julia Quinn

The book that Netflix brought to life with Bridgerton, The Duke and I is the perfect book like Twisted Love for readers who love steamy scenes and intense romance!

This slow-burn romance begins in the Regency Era where Daphne Bridgerton is friends with all the young men in London, so kind and witty yet not desirable. That is until Simon Basset, the Duke of Hastings, returns to England after his long travels with no intention to marry.

So, Simon, who is a good friend of Daphne’s brother, agrees to a fake courtship which would benefit them both. Daphne would become all the more desirable and Simon would be off the market for the ladies.

And their plan works perfectly, until feelings begin to brew between the pair.

Have you already read this novel? Check out our list of books like The Duke and I!

In The Unhoneymooners, Olive is unlucky in everything, not just love. On the other hand, her twin Ami seems to have everything go right for her, including winning an all-inclusive honeymoon in Hawaii.

Until everyone but Olive and the best man get food poisoning at the wedding’s reception buffet.

Now, with two tickets to Hawaii up for grabs, Olive can’t pass up the opportunity even if it means spending the whole time with the best man and her sworn enemy, Ethan.

When her new boss turns up at their hotel and a white lie about being on honeymoon spirals, the pair have to fake being newlyweds. But soon, they don’t seem to mind playing pretend. This is the perfect feel-good novel for those looking for something like Twisted Love!

A clever novel with a down-to-earth view on romance and relationships, It Only Happens in the Movies is about Audrey who isn’t having the best time with life considering her parents’ divorce, her own recent breakup and her friendships are changing all over.

So, really, romance isn’t something she is looking for until she meets her new co-worker, Harry who charms and flirts with her. Audrey just can’t resist and despite all her efforts not to, she finds herself falling for him.

Perfect for lovers of books like Twisted Love who want an uplifting and romantic book with a realistic portrayal of love and relationships.

All of the books above are a great read, especially if you’re looking for intense and exhilarating romance books like Twisted Love. I hope you found something you’ll enjoy!

Are you looking for more books similar to Twisted Love? Have any recommendations that didn’t make the list? Let us know in the comments! 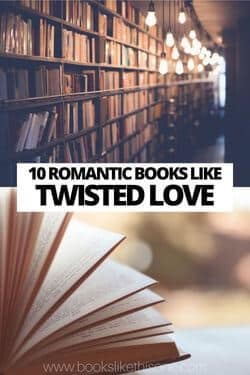