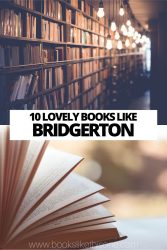 Books like The Duke and I can transport you to a whole other time in history. In this book, we travel to the Regency era, where upper-class mothers parade their daughters around to find them husbands.

During this time, the girls attend numerous events where they dance and talk to men who are in search of a wife. Daphne, who isn’t ready for marriage but is still being presented with possible matches, decides to take matters into her own hands. She and the Duke of Hastings, Simon, make a deal to fake a courtship but along the way, it turns into something real.

If you loved Bridgerton and the rest of the books in the series, then you will also enjoy this list of books like the Bridgerton series.

When you’re on the hunt for books similar to The Duke and I, the classic Pride and Prejudice has to be at the top of the list.

When the Bennet girls start searching for husbands, they get lucky by living close to a few eligible men. The second-eldest daughter Elizabeth is similar to Daphne from Bridgerton, she doesn’t want to settle for just anyone.

At first, when Elizabeth meets the cold but handsome Mr Darcy, they don’t get along but as they see more of each other feelings start to blossom. Darcy even proposes to Elizabeth but gets rejected.

As time goes by, with two of the sisters married and new information about Darcy getting revealed, Elizabeth is ready to rethink the proposal.

Already know and love this classic novel? Check out our list of books like Pride and Prejudice!

Bringing Down the Duke, by Evie Dunmore

Bringing Down the Duke is set in 1879 England. We follow the life of Annabelle, who is independent, smart and one of the first women allowed to study at Oxford. While she receives a scholarship, she has to participate in the women’s suffrage movement to keep it.

Each woman is assigned to a man in power to get their support in making a difference for women. Annabelle’s assignment just happens to be the very eligible bachelor Sebastian, the Duke of Montgomery.

Similar to Daphne in The Duke and I, Annabelle falls for the duke and the feeling is mutual. They both have to fight their inner battles and figure out if love beats fighting for their respectable causes.

My Lady’s Choosing: An Interactive Romance Novel, by Kitty Curran and Larissa Zageris

In the interactive novel My Lady’s Choosing, the reader is the main character. You get to decide how the story progresses along with the happily ever after. You will get to choose your love interest which also requires you to choose what’s more important to you in life.

If you choose Sir Benedict Granville, you might enjoy a few high society parties with some dancing and mystery involved.

With Captain Angus McTaggart, you can follow your passion for teaching while discovering new scenery. Or if you prefer a bad boy and some scandal, then Lord Garraway Craven is waiting for you.

Imagine what the world would look like if the United States of America had a monarchic government system. Books similar to The Duke and I do a good job representing strong female roles just like in the American Royals.

We get to follow four girls, with one of them being Princess Beatrice the future first queen of the country. The other girls include Beatrice’s sister Princess Samantha, Samantha’s best friend Nina and Prince Jefferson’s social-climbing ex-girlfriend Daphne.

While the Washingtons have ruled for close to 250 years, there has never been a ruling queen. Beatrice has trained excessively and now she must find a husband to further please her people before becoming queen.

As the girls navigate being royals or associated with royals, they must decide whether happiness is attainable or overrated.

In The Jane Austen Dating Agency, Sophie loves everything related to historical romance and Jane Austen.

Although she wants to be a writer, she accepts a job at a fashion magazine as a Sales Executive. She hates her job but believes if she sticks with it she can make her way to editorial at some point.

When she discovers The Jane Austen Dating Agency and the founder is named none other than Darcy, she sees it as a sign.

However, the agency doesn’t end up being what she expects and finding love feels like it’s even further away. In all the ups and downs, Sophie commits to the agency and builds strong friendships with a few members.

What she doesn’t see coming is discovering a dark secret while she’s thrown into her own Jane Austen story.

When We’re Thirty, by Casey Dembowski

In When We’re Thirty, Hannah had expected to be married by 30, but when her 30th birthday comes and goes with no proposal and only a dead-end relationship, she knows things have to change. Luckily for her, her college friend Will has similar plans.

He drops in unannounced and is there to keep his part of their pact: proposing to Hannah. Will and Hannah had made a marriage pact to get married if they were still single by age 30.

The aspect of a fake relationship deal between two friends is similar to other books like The Duke and I. What starts as an insane marriage proposal turn real marriage, has the potential to be a huge mistake or the perfect happily ever after.

In Fix Her Up, Georgette struggles with being taken seriously since she’s not only the youngest in her family but is also professionally a clown. She loves planning and entertaining at children’s parties but she is tired of being viewed as one of the kids.

In order to be seen as the grown woman she is, she creates a game plan to accomplish that and her brother’s best friend Travis is part of it. When Georgette and Travis start to fake date, similar to other books like The Duke and I, Georgette’s brother is not happy about it.

However, he’s the least of her worries when her crush on Travis only multiplies and she has no way to stop it.

Roomies gives the concept of convenient marriage, similar to books like Bridgerton, a whole new spin.

In the book, Holland offers to marry her talented subway performer crush turned Broadway star to help him with his visa situation. Holland says she wants to help Calvin with his dreams as well as her uncle who is the musical director, but deep down she wants to be close to Calvin.

What starts as a favour quickly turns into a real but complicated relationship between newlyweds Holland and Calvin. While falling in love and also having to pretend their marriage is legit, they run into a few bumps along the way.

If you add drama with fans, family, friends and secrets, Holland and Calvin have their hands full.

What can go wrong when you take a fake boyfriend to your sister’s wedding in Spain? Now, what if this “boyfriend” is the coworker you’ve strongly detested for years but now he wants to help you?

Catalina from The Spanish Love Deception feels like she’s out of alternative options when she lies to her family about having a date.

Catalina and Aaron make a deal to help each other out, they’ll each be the others’ date for a fundraiser and the wedding. However, the line between love and hate gets blurry the more they spend time together.

With the added stress from Catalina’s deception and the drama at home in Spain, there is no telling whether she’ll listen to her heart and let love in.

The Bride Test, by Helen Hoang

The second book of The Kiss Quotient series, The Bride Test does not disappoint.

Khai’s mom is desperate to find her autistic son a good Vietnamese wife who can love him and take care of him. This aspect of a mother intervening with her son or daughter’s love life is similar to books like The Duke and I.

After many interviews, she finally meets Esme and knows she’ll be perfect. When Esme agrees to go to America and meet Khai, to give her daughter a better life, she doesn’t expect to fall so easily for her potential husband.

While she does her best to help Khai realise he is also capable of loving someone, she also has to do what’s best for herself. Even though Khai is brilliant in most things, he can use the extra lessons in love from Esme.

Finding great books like Bridgerton and others similar to it can make you feel like you’ve time travelled without having to move a muscle except for when you flip the page. These books are not all set in the same era but the similar concepts can make you fall for each of these love stories nevertheless.

Are you looking for more books like The Duke and I? Have any recommendations that didn’t make the list? Let us know in the comments! 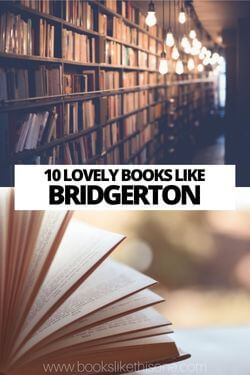