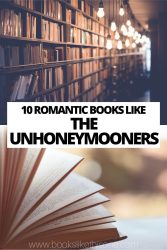 Are you looking for more books like The Unhoneymooners?

Olive and Ethan are encouraged to go on the nonrefundable and all-expenses-paid honeymoon in Hawaii in place of the newlyweds. But they must pretend to be the happy newly married couple.

When the weather is perfect, the drinks are flowing, love can slip in and the pretending is no longer necessary.

For those who love enemies to lovers romance, the following list of books similar to The Unhoneymooners will be the mini umbrella on your perfect cocktail.

Similar to books like The Unhoneymooners, People We Meet on Vacation follows two people on vacation but in this case, ten years’ worth of destinations.

In the book, Poppy and Alex started their friendship on rocky feet in college but after opening up to each other, they become best friends.

Over the years, they plan budget-friendly summer trips and even though everyone expects them to date, they keep their friendship mostly platonic. Unfortunately, around year eight they have a falling out and don’t speak for two years.

When Poppy finally reaches out, they decide to take a summer trip to try and repair their friendship. On this trip, they both must be honest to themselves and each other or else not only will their trips be over for good but also a possible future.

Catalina of The Spanish Love Deception has worked hard, often harder than the men around her, to get to where she’s at in her career.

Although she is proud of herself and is okay with her non-existing personal life, she curses her lack of a love life when she needs a fake boyfriend to take to her sister’s wedding.

With no other options than her office rival Aaron’s fake dating deal offer, she agrees to take him with her to Spain. Lina wasn’t prepared to get to know the real Aaron, which leaves her confused about who he truly is.

As they blur the lines of their fake relationship and deal with the wedding drama, Lina has to decide whether she’s ready to fall in love with her co-worker.

Something Borrowed, by Eve Dangerfield

It’s bad enough for Elle, who hates weddings, to have to go to her best friend’s wedding in Bali but what’s worse is having to be around Jackson, the guy she hates.

Similar to other characters in books like The Unhoneymooners, Elle and Jackson, from Something Borrowed, started off on the wrong foot with a misunderstanding, causing Elle’s hatred for him to brew.

After Jackson and Elle agree on a truce, they give in to their attraction for each other and explore all their wildest fantasies together. It surprises Elle how much fun she has with Jackson, knowing that she may have been wrong about him.

The eight-day wedding celebration can either help the two start over and give love a chance or they can go their separate ways and never speak again.

A Not So Meet Cute, by Meghan Quinn

Desperate times call for desperate measures, so when Lottie in A Not So Meet Cute finds herself unemployed with student loans to pay for, the only reasonable option is to search for a rich husband, right?

When she literally runs into Huxley, it’s not love at first sight but he is rich and happens to need a fake fiancée, so it’s something close to a perfect match.

Of course, it’s not all fun and games, since the two don’t get along but still manage to play their part in front of the people they’ve lied to. But along the way, they begin to put the annoyance away and get to know each other on a deeper level.

While becoming her own modern version of Pretty Woman, Lottie doesn’t expect to fall for her fake fiancé.

Dating You Hating You, by Christina Lauren

Written by the same authors as The Unhoneymooners, Dating You Hating You also has a similar enemies-to-lovers theme.

At first, when Evie and Carter meet at a party, the connection and sparks fly instantly. They have so much in common and are even both Hollywood agents, although at competing firms.

It’s not until they go into work and realise the two agencies have merged and they both have to compete for the top position, that they have to put their feelings aside and do whatever they can to win.

Putting her job first has always been easy for Evie, but she will discover how different it can be when she puts herself first.

Similar to some books like The Unhoneymooners, Sweet Addiction starts with a wedding, but in this case, it also involves cake and hooking up with a stranger.

Dylan owns and runs her own bakery so it isn’t totally weird to be hired to bake the cake for her ex’s wedding, right?

Although she has zero feelings for her ex, she is slightly affected by the whole event which leads her unexpectedly onto Reese’s lap.

After the best sex of her life along with some misunderstandings, Dylan and Reese start “casually” dating. But while Dylan obsesses over the casual aspect of the relationship when she really wants more, Reese tries to figure out how to show her he’s all in.

Today Tonight Tomorrow is a tale as old as time, similar to books like The Unhoneymooners, when two competitors cross the line from enemies to possible lovers.

Rowan and Neil have been up against each other since the first day of high school. They compete for the best test scores, for student council and for how many pull-ups they can do in gym class. But the main goal and deciding factor for the real winner is who becomes valedictorian.

When Neil receives the recognition, Rowan feels like a complete failure but is determined to beat him in Howl, an ultimate senior scavenger hunt with a twist.

As the hunt continues, with the two becoming the last players, they decide to work together and in the process, they actually get to know each other better. Rowan can’t help but wonder what life might look like if she would let herself fall for Neil.

The Ex Hex, by Erin Sterling

In a world where magic exists, it’s important to be careful what you wish for and who you hex when you’re a heartbroken witch.

In The Ex Hex, Vivienne has to find this out the hard way when, after a horrible breakup, she accidentally curses her ex-boyfriend Rhys. Luckily for him, the hex doesn’t extend outside the town of Graves Glen in Georgia, and since he lives in Wales, he should be fine.

That all changes when Rhys returns to Graves Glen nine years later and Vivienne realises her powers are much stronger than she thought.

Now that the town is filled with bad energy and the magic is out of control, Vivienne and Rhys have to work together to put everything back in order. When spending so much time together, getting to know each other all over again and saving the world, it can reawaken more than just magic.

Addison didn’t crash her estranged cousin’s wedding thinking she would become the Getaway Girl for the groom and future mayor, but when he needs to escape she is ready to help him.

After being left at the altar, Elijah needs a place to hide out and luckily Addison’s winter wonderland themed apartment is just the perfect place.

In books similar to The Unhoneymooners, the two main characters often save each other from uncomfortable situations like Addison and Elijah save each other.

What starts off as a friendship has the potential for something special if the two can admit they are ready for more.

After a short five-week relationship and nasty breakup, Gia doesn’t expect Jax to walk into her important meeting and ruin her deal.

In Afterburn, Gia gets a great job working for her role model and one of the best businesswomen in New York. She wants to learn everything she can in business and help her family’s restaurant succeed as well.

The strong family representation and dynamic seen with Gia’s family is similar to books like The Unhoneymooners.

Now that Jax is back Gia has no idea what games he wants to play and whether she has the strength to stay away from him. But this time, she plans on unraveling him while winning the game.

Are you a fan of Sylvia Day? Check out our list of books like The Crossfire Series!

Whether you’re going on an “unhoneymoon” or are just looking for your next enemies to lovers book, you will find just what you hoped for in the above list of books similar to The Unhoneymooners. Just make sure to pack a hat and sunscreen — it can get hot.

Are you searching for more books like The Unhoneymooners? Have any recommendations that didn’t make the list? Let us know in the comments! 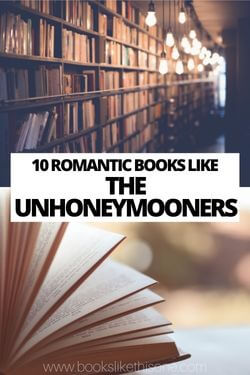