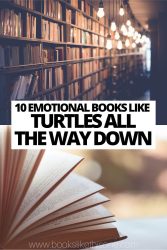 Are you searching for books like Turtles All the Way Down?

John Green is a renowned author known for his works such as The Fault in Our Stars and Paper Towns. In his novel, Turtles All the Way Down, we meet a young girl named Aza Holmes. Aza has never been the sort to be impulsive and reckless but when a billionaire goes missing and a hundred-thousand-dollar reward is up for grabs, her eager best friend, Daisy, drags her along for the ride.

They focus on the billionaire’s son, Davis, who Aza soon befriends. Struggling with long-term anxiety and obsessive-compulsive disorder, this mystery distracts Aza from her constant thoughts. But sometimes, you can’t ignore what wants to be known and soon Aza finds herself entrapped both within a dark mystery and her own mind.

An emotional book that looks at friendships, mental health and also provides readers with a great thrilling mystery! Books like Turtles All the Way Down are complex and thought-provoking but if you have already read this one, you may want to pick up something similar.

I have compiled a list of ten books for those who have a Turtles All the Way Down-sized hole in their heart.

Made You Up, by Francesca Zappia

In Made You Up, Alex has a hard time differentiating reality from delusion. With her only ally being her little sister, Alex is determined to get through high school and make it to college before her schizophrenia takes over her life.

Everything seems to be going well until a new boy at school turns up. Alex is certain Miles was a part of a delusion but now she’s not so sure. Alex is so used to things being strange that normal feels odd, especially when she starts going out with friends, going to parties and falling in love.

Focusing on mental health and teenage rites of passage, this charming and poignant book is perfect for those looking for more books like Turtles All the Way Down.

For a book similar to Turtles All the Way Down that pulls on your heartstrings, look no further than The Perks of Being a Wallflower.

Following Charlie, a boy in high school, we meet the characters through letters written by Charlie. Intimate, hilarious yet devastating, we follow a young boy growing into a young man. New friends, new experiences and new love, this coming-of-age story is a beautiful and powerful novel about mental health and teenage experiences.

This book like Turtles All the Way Down is perfect for those wanting a book to laugh and cry your heart out to.

Have you already read this novel? Check out our list of books like The Perks of Being a Wallflower!

One of Us is Lying, by Karen M. McManus

In One of Us is Lying, five students walk into detention and only four emerge alive and well. According to the autopsy reports, his death was not an accident. With no one having seen the culprit, all four students are considered suspects.

Wary of one another yet stuck in the same situation, the four are told to stay away from each other but find it hard. With a murderer on the loose and rumours of a group planned murder plot going round, each is convinced they are innocent.

Each student has their own secrets – as does everyone – but as these secrets are revealed and motives planted, it is hard for the students to know who to trust. In this murder mystery/thriller, readers will be on the edge of their seats as each plot twist is revealed.

For a book similar to Turtles All the Way Down, pick up this page-turner!

Have you already read this novel? Check out our list of books like One of Us is Lying!

Cath is a Simon Snow superfan. Her life has been taken over by the fandom, from online forums, movie premieres, cosplay and writing fanfiction. Cath and her sister, Wren, grew up with the fandom but now, Wren is growing up and away from Simon Snow. But Cath can’t let it go just yet.

Now that the twins are heading to college, Wren makes it known she wants her own life and her own roommate who isn’t Cath. Alone and out of her depth, Cath struggles with her gloomy roommate who always has her boyfriend lingering around, a creative writing teacher who despises fanfiction and a handsome boy who is only interested in work.

But Cath still has Simon Snow and the Simon Snow fandom has Cath. For a beautiful and hilarious coming-of-age book like Turtles All the Way Down, add Fangirl one to your to-be-read pile!

In It’s Kind of a Funny Story, a moving novel about the unexpected road to happiness, we meet Craig Gilner who checks himself into a psychiatric ward. An avid over-achiever, Craig is overwhelmed by the pressure and expectations of getting into Manhattan’s Executive Pre-Professional High School.

With no sleep and no food in his stomach, Craig nearly kills himself. This suicidal episode is what gets Craig hospitalized, surrounded by a whole variety of different people with their own issues.

With the help of the other patients, Craig is finally able to confront the anxiety that has put his life on halt. This book similar to Turtles All the Way Down is a heart-warmer and heart-wrencher.

The Midnight Library, by Matt Haig

There is a library – one between life and death – in which each book describes a life you might have lived if you had made a different choice. The shelves go on forever, each tiny choice changing the course of your life.

If you liked Turtles All the Way Down, pick up The Midnight Library for a new and interesting look at life and our experiences as humans.

In Every Last Word, Sam McAllister probably looks like every other girl in her year – pin-straight hair, precisely applied makeup and a perfect smile. Yet, Sam suffers with OCD meaning she is overwhelmed with dark and constant thoughts and worries.

Surrounded by toxic popular girls, Sam knows she has to keep her new friend, Caroline a secret and far from their judgement. When Caroline introduces Sam to a tight knit group in a hidden room at school: Poet’s Corner.

Suddenly, Sam begins to feel more normal, especially with the company of the cute musician. However, she soon begins to question her own reality when things start to fall apart.

A moving tale of mental health with surprising twists, this book like Turtle All the Way Down is a great pick for more John Green-esque tales.

Caden Bosch is a high school student whose odd behaviour is gaining attraction from his fellow classmates. Caden Bosch is also on a ship heading for Challenger Deep: the world’s deepest point in the Marianas Trench.

As the ship’s artist in residency, he documents the crew’s journey through his drawings. At school, he pretends to join the track team when instead, he is living in another world inside his own head, walking for miles as his thoughts take hold of him.

Challenger Deep is an intense story surrounding teenage mental health is a great alternative for readers looking for a book like Turtles All the Way Down.

My Heart and Other Black Holes, by Jasmine Warga

If you’re looking for a dark yet uplifting novel about finding the joy in life, pick up My Heart and Other Black Holes for a book like Turtles All the Way Down.

Aysel is obsessed with planning her own death. But she isn’t sure she can go through with it on her own. Her problems seem solved when she finds a website with a section that states: Suicide Partners. She finds FrozenRobert, or Roman as he is known in real life, who is also looking for a partner.

The pair are complete opposites but as they get to know each other, Aysel realizes that she maybe has more to live for than she first realized. The only problem is convincing Roman that he doesn’t have to go through with the pact either.

Audrey struggles with everyday life. Things that come easy to some, just don’t come at all for Audrey. She can’t step outside; she can’t even take her sunglasses off when she is inside her own home.

Things don’t seem like they’ll ever get better until her brother’s friend, Linus steps into her life. Suddenly, all the things that never seemed possible, seem achievable with Linus by her side.

A heart-warming and light-hearted novel about mental health and first loves, take a chance on Finding Audrey if you are missing a book like Turtles All the Way Down in your life.

The novels that make up this list of books like Turtles All the Way Down illustrate the teenage life and the mental health issues that can sometimes swallow you whole. Hopefully, you found one or two books to add to your list!

Are you searching for more books similar to Turtles All The Way Down? Have any recommendations that didn’t make the list? Let us know in the comments! 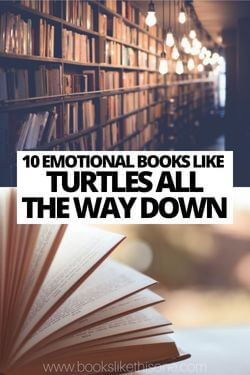