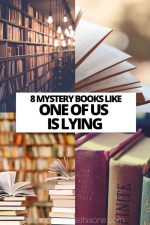 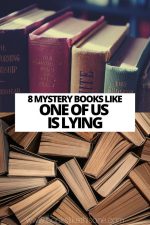 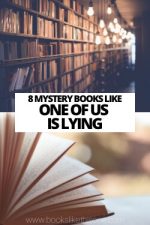 Books like One of Us is Lying allow us to exercise our brains trying to figure out clues and red herrings before finally revealing the killer. The question posed in this mystery by Karen McManus is: Everyone has secrets we don’t want the rest of the world to know, but what would you do to keep yours?

Five students at Bayview High arrive at detention – one dies, there are four left.

This is where the mystery begins.

The dead guy: Simon – creator of a gossip app.

When Simon dies after drinking a glass of water during detention, the police find out that he was about to release dreadful secrets about the other four students via his app the next day.

The mystery is unravelled via each student narrating their own story.

If you loved The Breakfast Club and binge-watched Veronica Mars (Yes and yes for me!) then you’ll love One of Us is Lying.

After reading a murder mystery you can feel a little deflated that it’s all over: no more clues to reveal, no more twists to contemplate, but never fear! We’re here to provide you with your next mystery to solve.

One of Us is Next by Karen McManus

This is the sequel to One of Us is Lying and takes place a year after the first book, although the main characters are different so it can be read as a stand-alone.

In this book, someone at Bayview High has information about some of the students; information they wouldn’t want to get out. Unlike Simon in the previous book, this person is going to give the victim a chance to avoid their indiscretions being paraded for all to see – They must participate in a game of Truth or Dare.

To avoid your darkest secrets being exposed, you must play the game.

If you enjoyed One of Us is Lying and you are craving more stories from Bayview High, then One of Us is Next is a great choice.

If you’re a fan of Oceans Eleven and are looking for a book similar to One of Us is Lying then may I present Heist Society?

Teenager, Katarina Bishop comes from a family of thieves. Her childhood was an education in how to plan the perfect heist.

She manages to change the path of her future back to something resembling ‘normal’ but when an influential mobster accuses her father of stealing his priceless works of art, she has to help. She has just two weeks to organise, plan and carry out a heist of her own. She needs to find out who stole the paintings and steal them back.

So, if you love it when a plan comes together, why not check out this book like One of Us is Lying.

Stormbreaker is by British author, Anthony Horowitcz, is part of the Alex Rider Series and became a New York Times Bestseller in 2001. It was later adapted for film in 2006.

Alex Rider’s parents are gone; he lives with his guardian – his uncle, Ian Rider – and his housekeeper, Jack Starbright.

When his uncle, who he believes is a banker, is killed in a car crash, Alex becomes suspicious. Ian wasn’t wearing his seatbelt and his office had been cleared out.

Alex discovers that his uncle was shot and he was definitely not a banker – he worked for MI6. Now MI6 want to recruit Alex to help investigate the inventor of the Stormbreaker computers, Herod Sayle, who wants to put his computers into British schools. They need him to go under cover as they suspect Sayle intends to murder thousands of children using his computers.

If you enjoy books like One of Us is Lying and want to read more teenage mysteries, definitely give Stormbreaker some room on your e-reader.

When looking for more books like One of Us is Lying then you may want to check out this multiple-award-winning novel which is the first in the Truly Devious series.

Shortly after Albert Ellingham opened a private school in 1936, his wife and daughter were kidnapped. The only clue found was a riddle signed Truly Devious.  The mystery of their disappearance was never solved.

First-year student, Stevie Bell, is an avid crime buff and decides she will be the one to solve this cold case – as soon as she has settled into her new life.

Unfortunately, before Stevie gets a chance to begin her investigations, Truly Devious strikes again! Now there are two murders to solve.

Prepare for twist and turns and woven stories told in a curious setting in this novel like One of Us is Lying.

In this book similar to One of Us is Lying, I have wandered off the path and into the world of Wiccans so you can expect a little magic with your mystery when reading Undead Girl Gang.

Fairmont Academy has its mean girls like every other school but when two die and the circumstances are suspect, someone has to find out what really happened.

Mila Flores is a Wiccan with Doc Martens, an attitude, and a desire to get to the truth.

Mean girls, June and Dayton have committed suicide by hanging themselves. Days later Mila’s best friend, Riley, who is also a practicing Wiccan drowns in a nearby creek.

Everyone at school believes they were all part of a suicide pact but Mila is convinced they are wrong.

To find out the truth, Mila finds a spell to bring back her friend. Unfortunately, she inadvertently brings back the other two girls as well. They all have seven days to find out who killed them – and come to terms with the fact that they are dead.

I’m wondering why all detectives don’t follow Mila’s lead. If you think the idea of bringing back the dead to help solve their own murder is awesome, then grab a copy of Undead Girl Gang.

White Rabbit is Roehrig’s second novel and at the core of his story is the relationship between Rufus and Sebastian who are dealing with heartbreak and the difficulties of coming out.

Rufus Holt is finally ready to move on after his boyfriend, Sabastian, broke his heart. But then Sabastian comes back and announces that they ‘need to talk’.

As if Rufus isn’t confused enough, he then gets a frantic call from his half-sister, April. She is at a party and something terrible has happened – she needs his help.

When Rufus and Sebastian arrive to find April holding a knife next to the bloody body of her boyfriend, Fox Whitney, Rufus has to decide whether she is as innocent as she claims.

The three of them set off to solve the mystery of who killed Fox and they have one night to do it!

This heart-thudding novel like One of Us is Lying will keep you guessing right to very end.

The Butterfly Clues, by Kate Ellison

In this book like One of Us is Lying, our heroine, Penelope, has an unstable home life: a drug-addled mother and a distant father whose job means they have to move cities frequently.

On top of that, her brother was found dead in Neverland, a shady side of town, a year ago. Penelope, or Lo as she likes to be called, has gained a coping mechanism – she has obsessive-compulsive disorder (OCD) and gets comfort from her rituals.

When she finds a butterfly necklace in a flea market one day, she finds out it was one of the things stolen from the apartment of a recently murdered stripper called Sapphire.

Lo want to find out exactly what happened to Sapphire but trying to uncover clues in a place like Neverland comes with danger and threats to her very existence. Luckily she finds help in a street artist called Flynt.

The Butterfly Clues is a captivating book like One of Us is Lying and will have you reading into the wee hours before you put it down.

My last suggestion, as always, may take you slightly out of your comfort zone. This mystery novel like One of Us is Lying is based in 1850 London (think old Sherlock Holmes movies) and is part of The Agency series.

Seventeen-year-old Mary Quinn was saved from the gallows at the age of twelve and has been trained at Miss Scrimshaw’s Academy for Girls. No ordinary academy, it is in fact a training ground for spies and detectives better known as The Agency.

In this book, Mary has to find out why Henry Thorold’s cargo ships keep going missing. He is suspected to be dealing in opium smuggling which makes him top of the suspect list.

Mary goes undercover as his daughter’s companion to search for clues and has some unexpected help in the form of James, who she meets in a closet and has his own reasons for looking into the secret world of Henry Thorold.

If the idea of a story based in the Victorian era has your mind thinking slow, steady and slightly depressing, don’t be fooled. A Spy in the House is a rollicking tale with plenty of humour and acerbic wit.

There you have it; a wide range of books like One of Us is Lying for your curious brain to solve. They may be classed in the YA genre but let’s face it, it doesn’t matter how old you are we all love playing detective.

Are you searching for more great books like One of Us is Lying? Have any recommendations that didn’t make the list? Let us know in the comments! 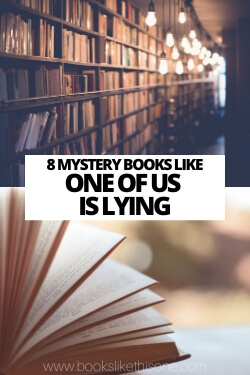