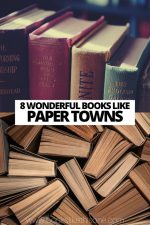 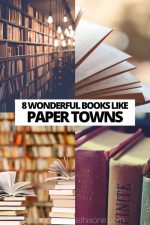 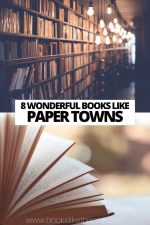 Reading books like Paper Towns is like reading the diary of our youth; that’s what author John Green does so brilliantly in all his novels. There’s plenty of drama mixed with the joy of first love – usually followed by the heartbreak of first love – and the discoveries we make about ourselves and the world we live in.

In Paper Towns, young Quentin’s (Q) life changes when he falls for his new neighbour, Margo Spiegelman. They become friends and bond over finding a dead body in the park but as the years pass their friendship turns to more of an acquaintance but Quentin wants it to be more.

The main story takes place nine years later when Margo sneaks into Q’s bedroom and tells him she needs his help to get revenge on people who have hurt her. Q agrees but after their quest, he wakes up to find Margo has gone. She has left clues about where she is and Q decides to find her with the help of some friends.

This is a humorous look into how we perceive people differently and if you enjoy novels like Paper Towns then read on; I have an excellent selection for you.

Turtles All the Way Down is similar to Paper Towns – wrapped with the themes of friendship; being a good daughter/student and love – with the added stress of dealing with OCD.

Most of the narration is from the inner dialogue of sixteen-year-old Aza Holmes and how she deals with her ‘thought spirals’ while everyone else around her carries on with their normal lives.

Her best friend, Daisy, is opposite in personality to Aza: she’s fearless and open while Aza is often ensnared in her own mind, so they make a good team when they’re not irritating each other.

When an Indianapolis CEO and billionaire, Russell Pickett, disappears under mysterious circumstances, Aza asks Daisy to help her investigate as there is a substantial reward and she knows Pickett’s son, Davis.

They visit Davis and Aza connects with him over the loss of a parent. A relationship forms between them while Aza attempts to control her compulsions.

As always, Green is insightful about mental illness and weaves it into a story everyone wants to read.

This book like Paper Towns has won so many awards that it seems rude not to read it!

When Mim Malone’s parents divorce, she is forced to move with her dad and his new wife. She hates Mississippi and misses her mum desperately. When she learns that her mum is sick, she steals $800 from her step mum’s tin and buys a bus ticket back home to Ohio.

This is where her story begins – the road trip to see her mother – which is told through Mim’s diary pages and letters to Iz. We meet her fellow travellers along the way and follow what happens to her and how she handles it.

There’s a message in every situation in this book exposed by Mim’s quirky character.

If you enjoyed the unconventional characters in books like Paper Towns then give Mosquitoland a place on your bookshelf.

The Paper Girl of Paris, by Jordyn Taylor

If you’ve ever dreamed of falling in love in Paris then The Paper Girl of Paris will drop you right there. This story is told by two girls who lived seventy years apart.

Sixteen-year-old Alice is in Paris trying to find out why her recently deceased grandmother left her an apartment that has been locked up for the last seven decades. She elicits the help of a charming student, Paul, to help her understand why her grandmother never mentioned a family she left behind after the war. What they discover is that Alice’s family is hiding something and nobody’s talking.

The story then takes us back to Nazi Germany where we follow socialite teenager, Adalyn, in her efforts to survive the horrors of everyday life. She meets the leader of a French resistance group, Luc, who encourages her to fight back, but the longer she fights, the more danger she places on her family’s safety and her own.

If you enjoy books like Paper Towns and want to expand your reading, then this one should be on your wish list.

Of all the stories you’ll read about the Titanic, Fateful is one you won’t forget.

With a background of secrets and painful memories, Tess Davies has remained as a maid to the Lisle family for a long time. The family decide to move to America and Tess’ plan is to leave once they arrive to go and find a life of her own.

Their journey is booked on RMS Titanic.

Tess meets Alec, one of the first-class passengers, and is immediately drawn to him, although there is something dark lurking in his past and it’s followed him onboard.

Tess and Alec’s love begins to blossom despite the pressure of being chased by werewolves.

This supernatural love story is a bizarre plot with captivating characters, a gripping storyline and an unpredictable ending. If you liked Paper Towns and enjoy a little fantasy with your mystery romance then you must give Fateful a read.

The Rules for Disappearing, by Ashley Elston

Sometimes adolescence has us trying to figure out who we are and where we fit in but imagine you’ve already lived in six different places and had six different identities by the time you’re seventeen!

In The Rules for Disappearing, Megan Jones – the name given to her – is in the Witness Protection Scheme. She is woken up in the dead of night and made to change her appearance – again – before being shunted to another location. This time she’s had enough.

Her father refuses to tell her what got them into the situation and her mother is finding oblivion in drink. Meg needs to know the truth and find out if she can do anything to help her family.

She is assisted in her quest by Ethan Landry, a boy she has met who has noticed the irregularities in her back-story. Their journey is going to be dangerous but maybe, if they survive, she will finally be free.

Try this book like Paper Towns, you won’t be disappointed.

From A Distant Star, by Karen McQuestion

If you’re old enough to have watched (and loved) John Carpenter’s 1984 film Starman with Jeff Bridges or have seen it on demand, then you should definitely read From A Distant Star. This book like Paper Towns has romance, a road trip and mystery with an added touch of science fiction.

Lucas Walker has a terminal illness but his seventeen-year-old girlfriend, Emma, has never given up hope that he’ll recover although even she is shocked when he makes a full recovery the same night a strange bright object drops into his backyard.

While his family and friends celebrate his miraculous recovery, Emma notices that Lucas is different. His speech pattern is different and his dog avoids him. She needs to know what’s happened to him and what the object was, and why the government have collected it.

They begin a road trip to find out and find new friends and enemies along the way.

If you enjoyed Paper Towns and like a bit of science fiction with your romance, then this one is for you.

We are keeping with the theme of romance and road trips in All the Bright Places, where a sad situation turns into a journey of discovery for our two main characters.

Violet Markey and Theodore Finch are not a likely love match but they connect when their mental issues have them both climbing the school tower with the intension of jumping off. Violet feels guilty because she didn’t die in the car crash that killed her sister and Finch has a fixation with death.

This is a funny and insightful story about how two very different people being themselves can have a dramatic effect on each other.

If you want to follow Violet and Finch on their journey to find love and sanity and you enjoy books like Paper Towns, you need to read All the Bright Places.

For my final suggestion, I have gone slightly off track as usual in an effort to expand your reading experience. Marina still has the love story and adventure of novels like Paper Towns but it is also a gothic horror, so if you are not squeamish then read on…

The story is set in Barcelona 1979 and our main character is fifteen-year-old Oscar Drai: a boarding school student who loves to explore the city.

One day he follows a song he hears to an old mansion where he meets a German painter and his daughter, Marina. When Marina realises Oscar enjoys the mysteries of the city, she invites him to a ritual she watches when a woman dressed in a black veil leaves a single rose on a grave that has no name engraved, just a black butterfly with open wings.

They decide to follow the woman and become entangled in the history of three stories that take them around and even under the city of Barcelona.

This book like Paper Towns will have you speeding through the spectrum of emotions; leaving you exhausted but satisfied.

Romance, mystery, werewolves and men from another world – I hope these stories have inspired you to put away the games console and get immersed in a good book.

Are you searching for more books like Paper Towns? Have any recommendations that didn’t make the list? Let us know in the comments! 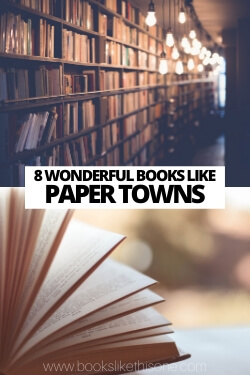