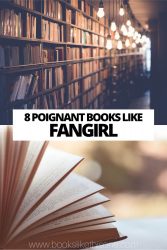 Fandom has been around for millennia. Fanfiction is now a genre in its own right and millions of shorts and novels have been written by fan communities around the world. Fangirl deals with this phenomenon/genre in a fun manner as main character Cath becomes obsessed with the Harry Potter-like character of Simon Snow.

Simon Snow helped her and twin-sister Wren get through their mother leaving them. Now both twins are off to college and as Wren gradually distances herself, Cath must ask the question every fan must, can she move on with her life?

Rowell’s coming-of-age story is relatable for anyone who’s ever used a book character to escape from the sometimes-grim realities of day-to-day life. If you’ve already read (and re-read) Cath’s story, there are other books like Fangirl which may divert your inner fan’s attention for a while.

Anatomy of a Misfit, by Andrea Portes

Books like Fangirl often hone in on the teenaged politics and horrors of high school that every high school student faces. In Anatomy of a Misfit, we follow Anika Dragomir, the third-most-popular girl at school.

Blonde hair and lip gloss on the outside, dark thoughts, fiendish plots and tragedy on the inside. Essentially, every other teenager. Anika treads a thin line, trying to maintain her social position with the other girls, until Logan, a passing former-nerd with a troubled home life sparks her hormones.

Anatomy of a Misfit will appeal to readers of Fangirl with its flawed deadpan lead, teenaged angst and a sprinkle of will they/won’t they romance. Anika is mean in the way many teenagers can be (especially the “popular” kids), but that makes the analysis of her flaws all the more interesting.

I’ll Meet You There, by Heather Demetrios

There are some books like Fangirl which delight in putting their teenaged protagonist through the emotional ringer.

Skylar Evans is on her way to evading the typical Creek View girl lifestyle of teenaged pregnancy and deadbeat jobs. Only three months of summer separates Skyler from art school, that is until her mother loses her job threatening Skylar’s dreams.

Whilst working at the Paradise Motel, Skylar meets Josh, an injured marine with a missing leg. Gradually the two strike up a bittersweet relationship as they begin to come to terms with life, loss and the resilience you need to survive and if possible, thrive.

I’ll Meet You There is essentially a study of underprivileged poor kids and how difficult it is for the socially and economically deprived to make headway in a world designed to repress them. Well worth a read if you enjoyed Fangirl.

Tear-jerking stories should be expected in books like Fangirl. The Fault in Our Stars catapulted John Green (an already commercially successful author) into the stratosphere. When reading, it is easy to see why.

Hazel is sixteen years old and dying of cancer. We know this because this is how she introduces herself in the opening lines of the book. Already, the main character is doomed to die… but not before she is introduced to the love of her life at a cancer kids mutual support group.

In terms of tugging at your heartstrings, The Fault in Our Stars yanks them to the extreme. Yes, there are points where you want to slap Hazel and Augustus for sounding so irritatingly pretentious… but then you remember, they’re teenagers.

Angst-ridden pretension comes with the job description, especially when you’re dying. Thinking you’re smarter than everyone else is part of growing up, which is what makes Hazel and Augustus’s stories so very sad.

Already know and love this novel? Check out our list of books like The Fault in Our Stars!

There is a whole generation who consider The Perks of Being a Wallflower THE definitive depiction of adolescent angst and drama. However, you could easily argue there are many books similar to Fangirl that do exactly the same thing.

Charlie is introverted, and at least to me, not a neurotypical teen. His story is told through letters, at turns both funny and alarming in some of the anxiety issues Charlie is struggling to deal with. Naïve and morose, there are parts of Charlie’s teenaged pain that anyone who remembers being a teen can relate to.

Whilst not as groundbreaking today as when it was first published, The Perks of Being a Wallflower admirably broaches stigmatised subjects (depression, anxiety) that many of us today still don’t like to acknowledge.

Have you already this epistolary novel? Check out our list of books like The Perks of Being a Wallflower!

Unreliable narrators are to be expected in books like Fangirl. The mind of an adolescent is complex at the best of times. Sprinkle in a little family mystery and tragedy, and you get We Were Liars, an interesting story told through the mucky memories of Cady Eastman.

Cady is the oldest grandchild of the very wealthy Sinclair family. Cady and her cousins used to spend their summers at the family summer estate until last year. Last year something bad clearly happened, but we’re not certain what exactly because Cady isn’t sure herself.

We Were Liars pretty much gives away its central idea in the title, but the story is so cleverly crafted, that even when you realise what has happened, you don’t mind. Fans of Fangirl should love this sad and slightly traumatising story.

Books like Fangirl love playing on the “What if?” conceit. They Both Die at the End introduces us to Mateo Torrez and Rufus Emeterio, two strangers who are contacted by Death-Cast, a company that accurately predicts the deaths of individuals.

Labelled as “Deckers” and told they have less than twenty-four hours to live, they both download the Last Friend app – an app designed to help lonely Deckers find someone to spend their last day with. On the app for different reasons, Mateo and Rufus soon embark on one last adventure, to live their lives to the fullest before it’s too late.

Many of us often lament that we don’t do enough to fill our lives and ponder what we would do if we knew we were going to die tomorrow. They Both Die at the End is a fantastic exploration of that scenario and you find yourself rooting for Mateo and Rufus, flaws and all.

Have you already read this book? Check out our list of books like They Both Die At The End!

Another similar title to Fangirl, Life in Outer Space does a solid job in depicting the familiar “geek-falls-in-love-with-popular-girl” trope.

Sam is a movie buff with a passion for horror films (Halloween is his favourite). Sam and his friends Mike, Adrian and Allison are the awkward losers of the school, a collection of nerds and book smarts. Everything begins to change when Camilla transfers to their school, a hugely popular girl who chooses to hang around with the losers instead of the cool kids.

On the surface, Life in Outer Space is just another hum-drum coming-of-age teen story. What makes it shine, however, is the depiction of Sam’s relationships with his friends, and how they eventually realise that the cool kids are just as scared and uncertain about things as they are.

Whilst this story isn’t for everyone, it should please anyone who enjoyed Fangirl.

We are the Goldens, by Dana Reinhardt

Books like Fangirl often deal with complicated sibling relationships and We are the Goldens is no exception. Told in the form of a sibling love-letter between Nell and her popular older sister Layla, the story deals with all the things you expect, and some you definitely don’t.

Layla is reckless and beautiful by glamour magazine definition, and Nell is her younger, quieter confidante, keeping Layla’s secrets. But now Nell is worried her glamourous sister is pulling away from her, especially when Layla becomes involved with one of their high school teachers.

Determined to preserve their sibling love, Nell makes decisions that have consequences for both girls. We are the Goldens takes obsession to new heights and examines the complexities of sibling relationships.

Books like Fangirl lead readers through the always painful process of growing up. Themes of uncertainty, and feeling like you’re being left behind are all richly explored in many of our recommendations. Let us know if you think we’ve missed something out.

Are you looking for more books like Fangirl? Have any recommendations that didn’t make the list? Let us know in the comments!