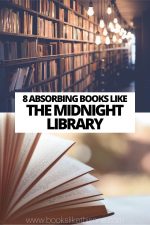 Part fantastical, part existential, part mystery, part true to life – there is something for everyone in books like The Midnight Library!

Matt Haig’s 2020 novel expertly explores the nature of life, existence and second chances with his Midnight Library an analogy for some sort of purgatory. The books in this library however are infinite and detail all the lives you could have had, had you made different decisions.

Nora Seed lived a life unfulfilled, estranged from her family with few friends, talented but with few accomplishments. She soon finds herself in the Midnight Library faced with the opportunity of exploring these alternate lives had she done things a bit differently the first time round.

As readers we are swept up in these parallel lives with Nora to curious, comedic and emotional effect begging the eternal question, is one lifetime enough to be truly fulfilled?

Books like The Midnight Library are absorbing and comfortable to read like a bedtime story their original plots draw us in leaving behind plenty to think about afterwards.

The Versions of Us, by Laura Bartlett

As with a lot of books like The Midnight Library, the question of “what if…?” is raised and this is the case with our first novel Laura Bartlett’s brilliant debut, The Versions of Us wherein three corresponding narratives, Bartlett depicts three corresponding outcomes to one chance meeting.

In Cambridge in 1958 Eva and Jim meet on a quiet country road. He is walking one way she riding a bike in the other. At the time Eva is in a relationship with David Katz an ambitious actor besotted with her, but this serendipitous meeting has the power to turn all that on its head, depending on the answer to one simple question.

So much more than just the what-if scenario, The Versions of Us offers readers a poignant exploration into the nature of love, how it can change, grow and deplete over the years thanks to the different things life throws at us and the different courses we take along the way.

Louis and Louise, by Julie Cohen

Perspective is at the heart of our next novel like The Midnight Library, looking at the same life but through the eyes of two different people; as a man and as a women it is Louis and Louise by Julie Cohen.

In one life a boy, Louis David Alder is born, in the other, a girl called Louise Dawn Alder.

Both have the same parents, the same friends, the same aspirations – the lure of the big wide world outside of their hometown of Maine. As the narrative unfolds we see that everything looks quite different depending on gender and the knock-on effects this has even if all other circumstances in our lives are exactly the same.

I really enjoyed Cohen’s timely take on opportunity and the nuances of the gendered experience in Louis and Louise, it is a powerful and emotive read but one that hooks you in immediately, reviewing the opportunities and setbacks in your own life too.

The Immortalists, by Chloe Benjamin

The Immortalists takes us back to 1969 where news of a travelling psychic who can tell you the date you will die is spreading along the streets of New York’s Lower East Side. Particularly intrigued are Simon, Klara, Varya and Daniel Gold who sneak out in search of their fortunes little knowing that what they’ll hear will influence the next 50 years of their lives.

It forces Varya into science and researching immortality, Klara becomes a magician obsessed with concealing reality, Daniel craves security and becomes a Doctor while Simon searches for love.

The Immortalists crosses the boundaries of mortality exploring the blurred lines between fate and choice, reality and illusion and the heavy subject of life, death and belief, a sublime read for anyone looking for books similar to The Midnight Library.

Benjamin’s novel is ambitious but one that succeeds with originality and flair ultimately begging the question, if you knew when you would die, how would you live?

The Binding, by Bridget Collins

Matt Haig uses books as a vehicle to explore alternate lives in his novel whereas Bridget Collins uses them as a means to dispose of certain memories in hers, the darkest most painful memories which occupy her characters’ minds.

The Binding is set in a parallel universe reminiscent of 19th Century England. In it, we enter the world of bookbinders, who are visited by anyone wishing to rid themselves of such a memory, once their story is told their book is bound and their conscious is wiped clean with those memories losing the power they once harboured.

The novel centres around Emmett Farmer who is sent to work at one of these bookbinders to help rebuild his strength after suffering some sort of mental collapse little knowing that returning to this place will awaken memories of his own that had unwittingly been deleted.

If it is the aspect of storytelling and the importance of books that draws you to novels like The Midnight Library then The Binding will be the perfect next read for you.

How to Stop Time, by Matt Haig

Matt Haig is a well know literary name nowadays having won many awards and written a great many books, his eloquence, intuition and empathy comes across in his writing therefore if you want to read more books like The Midnight Library then any one of his will do. I would however recommend first reaching for his 2017 novel How to Stop Time which explores similar themes about life, regret and fate.

Tom Hazard may look like a regular, dowdy 41-year-old history teacher but beneath this run of the mill exterior he is harbouring a secret. He is in fact centuries old. Thanks to a rare genetic condition Tom has lived many lives, he’s drunk with Fitzgerald, sailed the high seas with Captain Cook and was friends with Shakespeare!

Tom, and the others like him, are protected by the Albatross Society who keep them safe and ensure they live by one rule, never fall in love. For Tom, this rule becomes increasingly difficult when he meets Camille, a French teacher at his school.

Life and above all, love are at the heart of this breathtaking novel, prepare to become so absorbed in How to Stop Time, you’ll wish time would stop just so you could finish it in one sitting!

We go full-blown fantastical in our next novel like The Midnight Library it is the mesmerising story of The Starless Sea.

Simply put, the Starless Sea can be found deep underground, beneath the earth’s surface with great libraries dotting its shores. These libraries are guarded by a priesthood who used to be part of the regular world before finding their destined path to the Starless Sea through secret, hidden doorways.

Zachary Ezra Rawlins is bound for the Starless Sea, he just doesn’t realise it yet — that is until he finds a peculiar novel in the campus library. It has a bee, a sword and a key on the cover and tells a personal story from his own childhood, but how could the author of the book have known?

We follow Zachary on an amazing adventure to find out. The plot of Erin Morgenstern’s second novel is a complex tapestry of stories woven together, much like life. A fairytale for today, The Starless Sea is by no means an easy read however the imagination, the stories, the alternate world are just a few reasons why it is worth your time.

Are you a fan of Erin Morgenstern? Check out our list of more books like The Starless Sea!

The Book of Two Ways, by Jodi Piccoult

Books like The Midnight Library force us to consider the decisions we have made in our lives and face our regrets which is exactly what Jodi Piccoult explores in her novel The Book of Two Ways.

They say life flashes before your eyes when faced with an accident or a near miss, but this was not technically true for Dawn Edelstein. When she is told to prepare for a crash landing on a flight, Dawn’s thoughts don’t go to her life with her loving husband and daughter, they go to Wyatt Armstrong, a man she last saw over a decade ago.

In the face of death, she is filled with regret thinking of the life she could have had with him unearthing hidden treasures in Egypt on different burial sites as an archaeologist rather than her actual role as wife, mother and death doula.

These two narratives, Dawn’s two lives, unfurl running parallel to one another but will either truly offer her a life fulfilled, without regret? Find out in The Book of Two Ways.

One Day, by David Nicholls

Our last novel on this list of books like The Midnight Library is by another great English writer David Nicholls and I have chosen his novel One Day for his exploration into life, fate, choice, timing, circumstance and those youthful aspirations that life always has a way to derail.

Emma and Dexter meet on the 15th July 1988 and despite having to go their separate ways, they remain in touch. The novel tells where each of them is on that day each year over the course of 40 years describing what has happened to them, what they are doing, who they have met and above all their contact still with one another.

Their stories encounter, death, addiction, disappointment, love, successes and failures little knowing the happiness they will feel when they eventually admit to their feelings for one another and marry only for life to step in with more unexpected tragedy.

One Day is heartbreaking I think because of Nicholls’s sheer accuracy when ruminating on life and the casual cruelty of fate, it is a truly absorbing read.

There we have it, eight absorbing books like The Midnight Library full of originality, importance, reflection and escape I hope you enjoy getting lost in them as much as I did.

Are you looking for more books like The Midnight Library? Have any recommendations that didn’t make the list? Let us know in the comments! 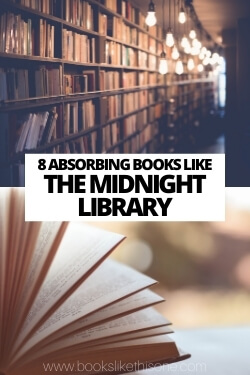