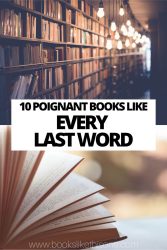 Are you looking for more books like Every Last Word?

Sam McAllister puts in a lot of effort to make sure she looks like every other girl in her year, to ensure she looks ordinary. With her straight hair and perfect makeup with a convincing smile, no one would know how overwhelmed she is with the constant dark thoughts that occur due to her severe OCD.

Her friends are toxic and snarky so when Sam makes a true, good friend, Caroline, she is determined to keep her away from their claws. When Caroline introduces Sam to the hidden Poet’s Corner at school, she suddenly begins to feel normal around her new friends, especially with the cute musician.

But soon things begin to fall apart as Sam questions her own reality. With no idea of what is and isn’t real, Sam has to navigate through her relationships and through school.

A tale of mental health and friendship with surprising plot twists that will have you gripped; Every Last Word is an incredible novel.

However, if you have already picked this book up and you are looking for something similar, then look no further. I have compiled a list of ten similar books for you below so enjoy!

A Quiet Kind of Thunder, by Sara Barnard

In A Quiet Kind of Thunder, Steffi doesn’t speak much at all. As a selective mute, she feels invisible amongst her peers until Rhys, a deaf boy, joins her school.

Finally, she feels seen. Due to her inability to verbally communicate, her basic knowledge of sign language means she is assigned to look after Rhys.

As they talk and get to know one another, Steffi realizes that she doesn’t need to use her voice to find her own place in the world and that communication doesn’t just mean talking.

A story of love and overcoming internal battles, this book like Every Last Word is a great read if you’re looking for something similar!

Eliza and Her Monsters, by Francesca Zappia

Eliza and Her Monsters is a young adult contemporary book like Every Last Word that dives into the topics of social media, mental health and young love.

There are two Elizas. One is shy and strange. The other is the online anonymous creator of a popular webcomic series, Monstrous Sea by LadyConstellation.

But when Eliza meets Wallace – a new transfer student – who also happens to be Monstrous Sea’s biggest fanfiction writer, he thinks she is just another fan. As he gets Eliza to enjoy the real world a little more, she begins to realize her life offline isn’t so bad.

But when her identity as LadyConstellation is leaked, her friendship with Wallace and everyone else in her life is threatened as well as her sanity.

My Heart and Other Black Holes, by Jasmine Warga

In this optimistic book about finding reasons to live our lives, we meet a suicidal teen, Aysel, who is infatuated with planning her own death.

When Aysel finds a website that helps people find suicide partners, she meets FrozenRobert, or Roman as he is called in real life. Both teens are complete opposites but as they get to know each other, Aysel realizes she has more to live for than she first believed.

However, Roman still wants to go through with the pact and Aysel now has to convince him that life is worth living.

Pick up My Heart and Other Black Holes for an uplifting book like Every Last Word.

Under Rose-Tainted Skies, by Louise Gornall

The outside world terrifies seventeen-year-old Nora who stays firmly within the walls of her comforting home. She lives by watching the world from her windows and by scrolling endlessly through other people’s social media.

That is until Luke turns up at her front door and sees a girl who isn’t defined by her mental illnesses but someone funny and brave and kind.

When their friendship turns into something akin to romance, Nora can’t help but feel like Luke deserves someone who can explore the world with him and even just kiss him.

She realizes she either has to let him or learn to be brave enough to become the girl Luke already sees.

Under Rose-Tainted Skies is a story of identity and overcoming your fears, something that fans of books similar to Every Last Word will appreciate.

In Finding Audrey, the things that seem to come so easy to other people, just do not come at all for Audrey. She can’t step foot outside her own home and even when inside, she has to wear her special sunglasses.

Nothing seems like it will ever get better until she meets her brother’s friend, Linus. Things that never seemed possible for Audrey finally seem achievable with Linus holding her hand.

But soon she realizes that Linus won’t always be by her side to guide her through life and that the first step to freedom is one she’ll have to take alone.

A light-hearted novel about first loves and mental health, this book similar to Every Last Word is definitely worth a read!

Am I Normal Yet?, By Holly Bourne

Evie has never felt normal and now that she has started at a new college (with students who don’t know her as the girl who went crazy) and is almost off her meds, things are finally looking up.

Too scared to tell her two new friends the truth about herself and with no one to turn to, Evie starts spiralling again.

Falling in love isn’t easy and can make people crazy but maybe for Evie, that’s just a bit too home-hitting.

A book similar to Every Last Word, Am I Normal Yet? follows a teenage girl navigating the ups and downs of falling in love whilst struggling with your own mind.

The Wicker King, by K. Ancrum

For fans of books like Every Last Word, The Wicker King is a must-read. A thrilling and heart-wrenching novel of devotion and friendship.

August and Jack are opposites. August is a misfit with pyromaniac tendencies whilst Jack is on the varsity rugby team, adored by most. But their friendship goes way back and when Jack begins to have hallucinations about a fantasy world intertwined with the real one, ruled by the Wicker King.

August helps Jack to navigate this and take on a quest to fulfil a prophecy in this world. Soon, even August finds it difficult to differentiate what is real and what is not as a shared delusion begins to take over both their worlds.

Girl in Pieces, by Kathleen Glasglow

Charlotte, a seventeen-year-old girl, has lost more than most people in general, let alone most people her age.

After losing her best friend in a tragic accident and having to survive on the streets, fending for herself, Charlotte wakes up in hospital following a failed suicide attempt. Without a home to go back to and no one to turn to, Charlotte turns to self-harm as a way to relieve herself of the internal pain she feels.

This book follows Charlotte as she finds her way back to finding the light in life. Girl in Pieces is a heartbreaking and hopeful story of one’s inner battle with themselves, a great alternative for lovers of books similar to Every Last Word.

Craig Gilner is a huge over-achiever who finds himself overwhelmed by his own high expectations and the pressure to get into Manhattan’s Executive Pre-Professional High School. In his lowest moment after failing to eat and sleep due to the stress, Craig nearly commits suicide.

Checking himself into a psychiatric ward, Craig meets a whole variety of different patients with their own problems. Through these people, Craig learns that the best way to move on with his life is to confront his issues face on with the help of the people he loves.

A heart-warming and poignant story of how the people in your life can make the biggest difference, It’s Kind of a Funny Story is a perfect book like Every Last Word.

In Starfish, we meet Kiko, a half-Japanese teenager who struggles with her social anxiety and her identity. With a narcissistic mother who doesn’t understand her, Kiko keeps her head down with the aim to start her real life once she gets into her dream art school, Prism.

But when a letter arrives detailing her rejection from the school, she is lost. So, when she gets the chance to tour west coast art schools with an old friend, she doesn’t look back.

A story of learning to be brave and face life head-on, Starfish is a page-turner perfect for lovers of books like Every Last Word.

The novels I have mentioned in the list above all illustrate the ups and downs that young adults go through, specifically focusing on the mental health issues that we can suffer from. Poignant and often relatable, these books like Every Last Word will have you speeding through the pages.

Are you looking for more books like Every Last Word? Have any recommendations that didn’t make the list? Let us know in the comments! 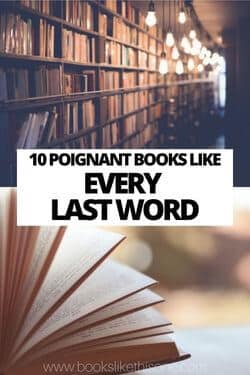