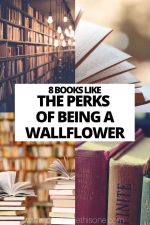 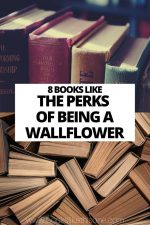 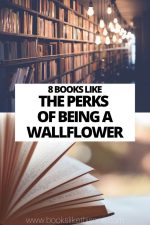 Books like The Perks of Being a Wallflower are often formed from a question the author is asking himself. In this novel, author Stephen Chbosky asks –‘Why do good people let themselves get treated so badly?’ and answers with ‘We accept the love we think we deserve’.

This coming-of-age tale is not the usual YA novel, touching lightly on the themes of romance, sexuality, and teenage angst, it examines the effects of child abuse, death, suicide and mental disorders in an unapologetic way. So much so, that this book was banned in many American high schools and libraries.

The Perks of Being a Wallflower is told in an epistolary fashion in the form of letters that our main character, Charlie, writes to nobody in particular about his struggles as a freshman. Apparently, many of the experiences that happen in the book were from the author’s own memories.

At first, Charlie’s only ally is his English teacher who encourages his writing; then along come Patrick and his stepsister, Sam, who change his life forever. The main thread throughout the story is Charlie’s feelings for Sam.

The film of the book was adapted and directed by Chbosky in 2012 and starred Logan Lerman as Charlie and Emma Watson as Sam.

If you would like to find more unique novels like The Perks of Being a Wallflower, then look no further;  I have sought out some new and some classics titles for your collection.

The Catcher in the Rye, by J D Salinger

If you’re looking for great books like The Perks of Being a Wallflower, then you can’t go wrong with The Catcher in the Rye. Chbosky’s novel has been likened to this classic tale by J D Salinger, another book that was banned in some areas being criticised for its direct and open inclusion of swearing and sexual themes. In both books, our heroes are struggling with sanity and judgement during their adolescent years.

The main character in The Catcher in the Rye is Holden Caulfield, a confused sixteen-year-old boy who, it’s suggested, narrates his story from a mental institution. The story he tells is of two days during the previous December.

Although this was written in the 1950s, it has a modern feel, which is probably why it was banned back then! Even though much of the subject matter is on the gloomy side, there are pockets of humour to be had.

Fun fact: This book was also labelled ‘Dangerous’ because David Chapman had it on him when he shot John Lennon.

So if you’re brave enough and you enjoy books like The Perks of Being a Wallflower then grab a copy of The Catcher in the Rye.

Another book on the ‘banned’ list like The Perks of Being a Wallflower is Looking for Alaska by John Green, who also wrote The Fault in Our Stars.

This ‘modern classic’– yes I realise that’s an oxymoron – created anxiety in parents around the world due to some explicit scenes, controversial religious views and liberal use of profanities. All the reasons that teenagers will want to read it!

Miles Halter – Pudge – is an introverted teenager intrigued by the Great Perhaps – finding a way to move on when there are no answers. On his journey, he manages to gain a few friends, one of which is a girl called Alaska who is bright and energetic, if not occasionally moody.

Pudge narrates his story of discovery, from romance to religion and all that adolescents encounter in between.

So, if you are seeking something similar to The Perks of Being a Wallflower, then put Looking for Alaska on your reading list.

Violet was one of the popular kids until her sister died in a car accident; now she is suffering from survivor’s guilt.

Theodore is the school weirdo. He has (undiagnosed) bipolar affective disorder and has an unhealthy fixation with death.

One day they both climb the school tower at the same time with the intention of jumping off.

After talking each other out of suicide, they begin a journey where they find love and support in each other.

This rollercoaster of emotions will have you gripping the edges of the book /e-reader until the very end of their story.

Fun Fact: Apparently, Niven based Theodore on a boy she loved once.

If you liked The Perks of Being a Wallflower then I would definitely make sure you read All the Bright Places.

The Secret Life of Bees, by Sue Monk Kidd

If you finished your copy of The Perks of Being a Wallflower and are need of something similar but more uplifting, I must suggest The Secret Life of Bees. A touching coming-of-age story about one girl’s path through violence and racism to find the love she craves.

The setting is South Carolina 1964. Lily Owens’ mother died when she was four and Lily believes it was her fault. Her father is austere and distant; her only friend, and surrogate mother, is a black servant called, Rosaleen.

When Rosaleen is involved in a racial incident, Lily decides to go on the run with her. They travel to the town of Tiverton in the hope that Lily can find out more about her mother. There, they are taken in by three black sisters who keep bees.

This novel like The Perks of Being a Wallflower will take you through the emotional spectrum in the most wonderful way.

Already read this book? Check out our list of more books like The Secret Life of Bees!

The Book of Lost Things, by John Connolly

Wonderfully weird and quirky describes this book like The Perks of Being a Wallflower. Set during World War II, when a twelve-year-old boy loses his mother to cancer, he retreats into himself.

He and his father soon move to his new stepmother’s house where David practically lives in the attic reads books and listens to the fairytales on the walls whispering to him.

He is transported into the alternate universe of his books – a world of mythical creatures. Eventually, David tries to get back through the portal he arrived through but it doesn’t work so he goes in search of a distant king and The Book of Lost Things.

The theme of the story deals with cruelty, death and greed – as fairytales often do. So if you are seeking more books similar to The Perks of Being a Wallflower then get your freak on with this unique tale by John Connolly.

Published in 2012, Tell the Wolves I’m Home centres on the AIDS crisis in the 1980s. This was an extremely traumatic time for the gay community whose proclivities were initially blamed for the epidemic.

In this novel like The Perks of Being a Wallflower, fourteen-year-old June Elbus has a confidant in her uncle Finn; he is a renowned painter and the holder of her heart – but he is also dying of AIDS. June is only told that he died of an unknown disease. His last painting is a portrait of June and her sister, Greta.

At the funeral, she meets Toby, Finn’s boyfriend. Against her mother’s wishes, they begin a friendship, which was Finn’s dying wish.

The painting, which Finn titled, Tell the Wolves I’m Home, plays a major role in this story, along with the touching sentiment of tolerance, compassion and self-discovery.

So, if you enjoyed The Perks of Being a Wallflower, then I highly recommend you read Tell the Wolves I’m Home.

The Scent Keeper, by Erica Bauermeister

Some authors have the ability to transport you to a particular place or time; their elaborate prose evoking a sense of place. But open the pages of The Scent Keeper and you’ll be inhaling the gloriously immersive descriptions that will have you believing you can actually smell whatever Emmeline is describing.

Emmeline and her father live on a remote island in the Pacific Northwest. Her father is a scientist who studies and collects scents. He places them in small wooden boxes which take up an entire wall in their cabin and he teaches Emmeline about nature through fragrance.

She is happy with her magical life until something happens to shatter her illusion which sparks off a terrible incident.

In the second part of the book, we follow Emmeline’s journey into the real world where she has to learn how to live in a small coastal town.

Over the years, she discovers what her father was trying to conceal.

If you want more books like The Perks of Being a Wallflower and a beautifully written story, then grab a mug of tea and settle by the fireplace with The Scent Keeper.

This novel like The Perks of Being a Wallflower centres on the suicide of student Hannah Baker. She leaves recordings which blame twelve people – including a school counsellor – for her demise. (If you’re wondering why thirteen, it’s because she blames one person twice.)

Thirteen Reasons Why is told by Clay Jensen, who receives the tapes in the post. On them are Hannah’s reasons why each one of them contributed to her death.

Clay is asked to send the tapes to the next person on the list.

At the end of the story, Clay is able to begin helping his friend, Skye, who he suspects may also be considering suicide.

There is a television series based on the book that has caused some controversy since its release as with all the books here and any adaptations of them.

Maybe we are not quite as liberal as we think as the same issues in a book back in the 50s are still creating a stir today.

When thinking about books like The Perks of Being a Wallflower I was astonished by how many YA novels there are out there that discuss the very delicate subject of suicide. At first, I thought ‘how depressing’ but apparently, teenage suicide is the third leading cause of death of individuals aged from 10 to 14.

Maybe the more we are open about the subject, the more we can understand why and help those who are struggling. What do you guys think?

Are you looking for more books like The Perks of Being a Wallflower? Have any recommendations that didn’t make the list? Let us know in the comments! 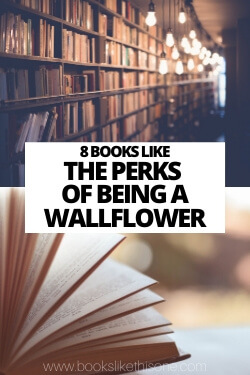