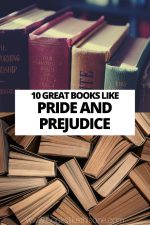 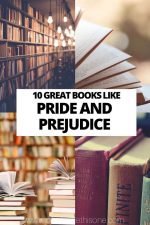 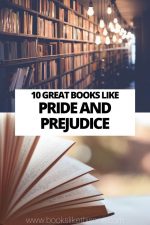 Jane Austen’s 1813 novel Pride and Prejudice regularly ranks among book-lovers and romantics alike as one of their favourite works of literature. Those who have been charmed by Elizabeth Bennet’s romantic mishaps and hasty judgements have long been on the search for similar works of fiction. As arguably Austen’s most notable work, finding books like Pride and Prejudice isn’t too difficult a task.

Austen was influenced and has influenced many a writer and there are numerous works in publication out there that explore similar themes and time periods. Often lauded as one of the pinnacle works of feminist literature, there are numerous other books like Pride and Prejudice penned by female authors who spearheaded the idea women could be novelists, and good ones at that.

So, whether you like the romance or the history of Pride and Prejudice, here are 10 books that are sure to charm you much in the same way.

Though author Charlotte Brontë cited Pride and Prejudice as disappointing and “a carefully fenced, highly cultivated garden, with neat borders and delicate flowers; but … no open country, no fresh air…” there is very little dispute that her most famous novel was influenced, even slightly by Austen’s titular work.

Originally published in 1847 under the male pseudonym Currer Bell, Charlotte Brontë’s Jane Eyre is often considered one of the first works of feminist literature and is a pinnacle example of the bildungsroman genre.

The novel follows, unsurprisingly, the orphaned Jane Eyre as she moves from an abusive household to a bleak school for orphaned girls until finally becoming a governess for a wealthy child at an estate called Thornfield Hall.

While in her governess role, Jane develops a love interest in the master of Thornfield Hall, Mr Rochester. There are significant developments in Jane Eyre that make it an engrossing read and will keep you captivated to the very end.

Groundbreaking for its time, Jane Eyre deals with such themes as marriage for love, the class system, and mental illness in the Victorian era and is an excellent option if you’re on the hunt for books like Pride and Prejudice.

Already read this book? Then make sure to check out our list of books like Jane Eyre!

To the Lighthouse, by Virginia Woolf

Though Virginia Woolf’s 1927 novel To the Lighthouse was published more that 100 years after Pride and Prejudice, it still bears some similarities to the latter novel and is a great read if you’re looking for books like it.

The book, written in Woolf’s unique stream of consciousness style that was commonly found in novels from the 1920s, mostly follows the Ramsay family at their summer home on Scotland’s Isle of Skye through multiple years.

As is famous with Woolf’s works and in many modernist novels of the time, it isn’t a plot-driven narrative, however, it does deal with similar themes to Pride and Prejudice when it comes to the rhetoric on marriage, class, and societal roles.

Daphne du Maurier’s 1938 Gothic novel Rebeccais an excellent choice if you’re on the hunt for books like Pride and Prejudice.

This mysterious novel is told from the point of view of the unnamed titular character, the second Mrs de Winter, as she reflects on past events at her husbands lavish yet emotionally haunted Cornish estate of Manderley.

Throughout the novel, the narrator grapples with being the replacement for the deceased Rebecca, Mr de Winter’s first wife. As the housekeeper Mrs Danvers, treats the narrator with disdain and she is ignored by her new husband, she begins to doubt her sanity and validity compared to the seemingly perfect idea of Rebecca.

The novel is creepy and haunting and explores life in upper-class England much like Pride and Prejudice. Famously turned into an Academy Award-winning feature film by iconic director Alfred Hitchcock in 1940 and consistently is compared to works by the Brontë sisters, there is no doubt the Rebecca is a wonderful read.

Already read this book? Then make sure to check out our list of more books like Rebecca!

When looking for books like Pride and Prejudice, you can’t go wrong with picking a work from a Brontë sister and Emily Brontë’s 1847 novel Wuthering Heights is an excellent choice.

Originally published under the male pseudonym Ellis Bell, Wuthering Heights was Emily Brontë’s first and only novel. It follows Mr Lockwood at first as he rents Thrushcross Grange in the remote moors of Yorkshire and his relationship with his mysterious landlord, Heathcliff, owner of the farmhouse, Wuthering Heights.

The novel then follows the story of Heathcliff throughout his life from his early childhood to how he came to where he was. It also follows his relationship with his adoptive sister, Catherine.

The novel, often classified and a Gothic tragedy, deals with such themes as is similar for novels of their time, such as class, birth, and love.

Already read this book? Then make sure to check out our list of books like Wuthering Heights!

The House of Mirth, by Edith Wharton

If you liked Pride and Prejudice because of its insight into upper class life and societal norms, then Edith Wharton’s The House of Mirth is another great reading option for you.

Though it is set in turn-of-the-20th century New York City rather than England, Wharton’s 1905 novel deals with much similar themes to Pride and Prejudice. The novel follows socialite Lily Bart who, though she was born into wealth and a high social standing, has found herself and her family impoverished.

One of the few ways she could get out of her financial ruin is to get married, however, she has waited to long and, and age 29, was considered to be about ten years too old to be on the “marriage market.”

The books follows themes like keeping up with societal norms, the effects of class, and a woman’s right to build her own life at a time when that was a very radical idea. Because of these themes, it is a great option if you’re on the look out for books like Pride and Prejudice.

If you like Pride and Prejudice because if its insight into the cultural and societal norms and customs in England during the 1810s, then George Eliot’s Middlemarch might be a good title to add to your reading list as well.

Published in 1871, the novel spans the years of 1829-1832 and is set in the fictitious town in England’s Midlands called Middlemarch. The novel, whose full title is Middlemarch, A Study of Provincial Life, is considered to be one of Eliot’s (the male pen name for Mary Anne Evans) best works.

Though the story is fictional, Middlemarch is considered to be a historical novel and is one of the best insights into, surprisingly, English provincial life in the 1830s. It is an excellent window into the class systems of England during that time and the role that women played in that society.

When looking for books like Pride and Prejudice, you can’t go wrong with picking up another of Jane Austen’s novels, and Emma is a great choice!

Published in 1816, the novel follows Emma Woodhouse, a young women living in British high society who fancies herself a bit of a matchmaker, though has little thought of marrying herself.

As the novel progresses, Emma makes matches for her friends, makes mistakes, and misconstrues loving feelings toward a few of the characters. It is similar to Pride and Prejudice as it follows many of the same themes of love, marriage, and not realising what is there right in front of you.

The Tenant of Wildfell Hall, by Anne Brontë

If you want a novel like Pride and Prejudice but would like something a bit more serious and not as frivolous as the Austen book, then Anne Brontë’s The Tenant of Wildfell Hall is an excellent option.

Though all of the works by the Brontë sisters are considered to be monumental feminist literature, Wildfell Hall is often accredited as being the very first blatantly feminist novel.

Originally published in 1848 under the pen name Acton Bell, Wildfell Hall follows the story of Helen Graham as she takes up residence in the estate Wildfell Hall after running away from her abusive and alcoholic husband.

At the time of its publication, it was considered too graphic of a novel to receive much critical acclaim, even from the author’s own sister, Charlotte Brontë. The themes like alcoholism, domestic violence, the role of women in a male-driven society, and gender relations were though to be too blatantly laid out in the novel.

However, Wildfell Hall is an excellent depiction of class and society at the time and is certainly an enlightening read if you’re interested in a more realistic look into gender relations in Victorian England.

Little Women, by Louisa May Allcott

If you are looking for books like Pride and Prejudice because you liked the strong female lead as she navigates love and life, then Louisa May Allcott’s 1868 coming of age novel Little Women is a great option for you.

This novel follows the story of the March sisters — Meg, Jo, Beth, and Amy — as they learn, grow, and deal with love and loss in the state of Massachusetts during and in the aftermath of the American Civil War.

The novel deals with feminist themes much like the other books on this list and, again, is a great insight into upper and middle-class American lifestyle in the late nineteenth century.

Though the most recent of the novels in this list of books like Pride and Prejudice was published in 1927, the last novel we’re going to talk about is Helen Fielding’s 1996 novel, Bridget Jones’s Diary.

Though Pride and Prejudice is sometimes lauded as a feminist novel, Bridget Jones’s Diary had received the opposite criticism in modern society and there are certainly some aspects of the book that have not aged well, especially in regards to the normalisation of workplace sexual harassment.

However, if you are after a fun and romantic read with a flawed and relatable titular character, Bridget Jones’s Diary is a wonderful choice for you.

There are numerous books like Pride and Prejudice that are very much worth reading, whether you like the Jane Austen for its romance or societal critique.

Have you read any great books like Pride and Prejudice that didn’t make the list? Let us know in the comments! 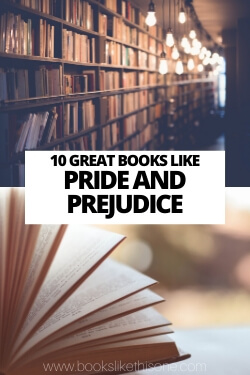