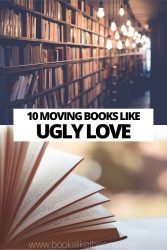 Tate Collins and Miles Archer are not friends. Yet, somehow, there is an undeniable mutual attraction between the pair. Neither have time or want a relationship so when their feelings become clear, they decide to form an arrangement. Casual hookups, no strings attracted, friends with benefits, whatever you want to call it. Just not a relationship.

Straight away Miles tells Tate that there was no future for them nor should she ask about his past. Tate has no intention of this and it all seems too easy until the situation takes an ugly turn.

Full of drama and emotional conflict, this is an entertaining yet thought-provoking read. However, if you’ve already read this book, you are probably looking for something else to pick up. If you want to read more romance books like Ugly Love then look no further than this list of ten books!

In Shatter Me, Juliette is cursed with a gift – to never touch anyone again. Her touch is poison. Her touch is death. Last time Juliette touched someone, it was an accident and one she’ll never forget. Locked up for murder, no one knows why her touch is fatal.

However, no one truly pays attention to her when the world is falling apart. Food is scarce, disease flood the population and the sky is no longer blue. The Reestablishment locked her away in a cell but as rumours of war brew, they realize Juliette could be more than a prisoner.

In the town where Pippa Fitz-Amboi grew up, a closed case of murder consumes the town. Everyone knows it was Sal Singh who killed schoolgirl Andie Bell five years ago. However, Pippa is not so sure.

After choosing the case for her final school project, she begins to peel back the layers of the case one by one. Soon, secrets start spilling everywhere and it is obvious someone in the town is hiding in plain sight.  However, with a killer on the loose, only time will tell how far they will go to stop Pippa from telling the truth.

In A Good Girl’s Guide to Murder, readers will be taken on a rollercoaster, much like in Ugly Love. If you want a book similar to it then this will be right up your street.

Already read this book? Check out our list of more similar books to A Good Girl’s Guide to Murder!

Hannah has always been unlucky in love, until now. Finally, she has a crush on someone and she will do anything to get them to notice her. Including making a deal with the college bad boy.

She’ll need to step out of her comfort zone for her crush to notice her so tutors the annoying yet handsome captain of the hockey team in exchange for a pretend date.

Garrett, on the other hand, needs to boost his GPA if he has any chance of playing hockey professionally. The more time he spends being tutored by Hannah and taking her on fake dates, the more he falls for the brunette. Then, after one single kiss, he knows he will have to convince Hannah it is him she should be crushing on.

Another fake dating trope and forbidden romance novel like Ugly Love. Pick up The Deal for a refreshing read.

In Fix Her Up, Georgie Castle’s family runs an amazing home renovation company however, Georgie decided to move into the children’s party business instead. Determined to prove she is living her best life; she upgrades her business and decides to put herself onto the market.

Having never secured a date, she talks to the town’s resident sports star (also her best friend’s brother). Travis Ford was the hottest baseball player of his time until an injury knocked him out of the leagues.

Now, he’s buying houses and trying to live a quieter life – although it is hard when people recognize you everywhere you go. Georgie suggests the pair start a pretend relationship to land Travis a new job and shock their families.

Suddenly, Georgie isn’t the little girl he remembers from his childhood. This sweet romance is an uplifting read for those looking for a book similar to Ugly Love.

In Twisted Love, Alex Volkov is haunted by his own past and he is on a ruthless quest for vengeance and success. A cold, calculating man with a heart of stone, he has no time nor effort for love and relationships.

That is until he has to look after his best friend’s sister.

Ava Chen cannot remember her childhood but is plagued by the nightmares of that time. A bright, warm-hearted girl, she has not let her past break her down.

She never expected to fall for the wrong man: her best friend’s brother, her neighbor. Yet, something lingers between the pair which could save or destroy them both.

Already read this book? Check out our list of more books akin to Twisted Love!

The Hating Game is the perfect book for those looking for more novels with similar themes to Ugly Love.

Lucy loves to be liked, especially by those who work in her office. Unfortunately, there is one exception: Josh Templeman.

And the feeling is mutual. Working full time, trapped together for forty hours a week, the two begin a game of upmanship, trying to outdo each other with every task they’re assigned.

Then, a promotion becomes available and their game takes a turn. The winner becomes the other’s boss. Lucy can’t stand the thought of Josh being her boss so plans on resigning if it comes to it.

However, the two end up sharing a kiss in the work elevator and suddenly Lucy is not sure she hates Josh after all.

Regretting You, by Colleen Hoover

The day before she is scheduled to move across the country, Fallon meets aspiring writer, Ben. Spending her last day in town together, Fallon becomes Ben’s muse.

Meeting on that same day every year, Fallon begins to worry that Ben is lying to her. Has he been fabricating a perfect story much like his novel? Fallon isn’t sure she will like the plot twist Ben has planned for her. Is this truly a love story?

In Regretting You, readers are provided with a unique book that will satisfy their craving for a book to read once they’re finished with Ugly Love.

Moving to San Francisco should have been the best thing for Caroline. That is, until, her neighbour’s nightly exercise becomes a little too much for her.

Hearing the bed bang against the wall and womanly screams of pleasure every night on repeat, Caroline has had enough.

Running over to his apartment in just a baby doll and full of frustration, she finally meets her handsome and athletic neighbor, Simon Parker. Somehow, however, Caroline finds that she may be the next woman to land herself in Simon’s bed.

For a steamy yet hilarious novel pick up Wallbanger!

Get a Life, Chloe Brown, by Talia Hibbert

For fans of Ugly Love looking for their next book to read, look no further than Get A Life, Chloe Brown!

Chloe is a chronically ill tech and computer nerd who finally wants to start living an independent life.

A near death experience made Chloe rethink her life and she decides she needs to start having way more fun. With a list of things to try out, Chloe needs someone to show her the ropes of living.

Red Morgan is the man for the job. As the two experience Chloe’s list of events, they grow closer and soon, feelings begin to emerge. Love makes life worth living.

In The Love Hypothesis, Olive Smith is more interested in science than relationships. She believes long term relationships do not work as everyone says and would not ever commit to one herself. A third-year PhD candidate, she focuses more on her work than love.

However, her best friend, Anh, asks about her dating life and Olive panics. She says she has moved on and is dating again. But like any scientist, Anh needs proof so Olive panics and kisses the first man she sees.

Adam Carlsen is a stern and unapproachable young professor and for some reason, he plays along. As the charade continues, Olive’s career is put in jeopardy when things go awry at a science conference.

Adam helps her out and suddenly, he seems a lot more approachable than before. Romantic feelings begin to brew and their fake relationship begins to feel a lot more like a real one. This book will make you laugh, blush and cry with its loveable characters and cute scenes.

If you love fake dating then this is the perfect book to read after Ugly Love.

Already read this book? Check out our list of more similar books to The Love Hypothesis!

Books Like Ugly Love depict the obstacles we sometimes must overcome in our pursuits of love and romance. Each of the ten books I have recommended have a different take on the romance genre so will provide something new for everyone looking for their next read. Enjoy!

Are you looking for more novels to read next after Ugly Love? Have any recommendations that didn’t make the list? Let us know in the comments! 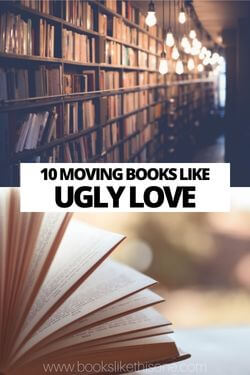