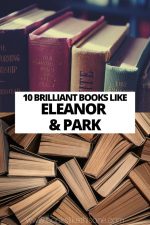 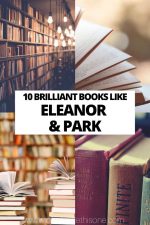 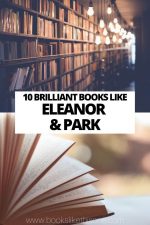 Published in 2013, Rainbow Rowell’s Eleanor & Park has gained immense critical acclaim and controversy. Bringing up themes like teenage love, domestic violence, bullying, and the feelings of being outcast, the novel is consistently considered to be one of the most honest and realistic in the young adult genre. If you’ve just finished reading this excellent novel and are looking for more books like Eleanor & Park, be sure to check out this list!

Looking for Alaska by John Green

The debut novel from the reigning king of young adult literature, Looking for Alaska is an excellent novel to read, especially if you’re on the hunt for books like Eleanor & Park.

The novel follows sixteen-year-old Miles “Pudge” Halter as he leaves his suburban high school in Florida to attend a small boarding school in Alabama. Here, he meets a group of smart new friends and develops a deep affection for wild and troubled Alaska Young.

Written in two parts, the first half of the novel sets the stage for a life-changing event. Exploring themes such as coming of age, drinking, depression, loss, and sex, Looking for Alaska has drawn a significant amount of controversy since its publication in 2004. Though, unfortunately, the book has been pulled from a number of school shelves due to “inappropriate content,” it is a fantastic novel that honestly describes real issues that teens face.

Looking for Alaska is also being adapted for a limited web series produced by Hulu. As one of the best modern young adult novels available on bookshelves, it is an excelled choice if you’re looking to read something similar to Eleanor & Park.

The Perks of Being a Wallflower by Stephen Chbosky

If you liked Eleanor & Park because of its honest writing style, 1980’s backdrop, and the strong thematic elements that it explores, then you are also sure to love Stephen Chbosky’s The Perks of Being a Wallflower.

This 1997 novel, set in the years 1990-91, follows introverted and withdrawn Charlie as he navigates his first year of high school. Freshly dealing with the trauma surrounding the suicide of his best friend the previous school year, Charlie meets a dynamic group of new friends who help make his life at school a bit easier.

Dealing with such themes and sexual assault, abortion, homosexuality, mental illness, and teenage drinking and drug use, The Perks of Being a Wallflower also often finds itself drawing significant controversy and routinely finds itself on lists of frequently challenged books.

Despite its unfortunate controversy, The Perks of Being a Wallflower is a wonderful novel that is an excellent reading choice if you’re looking for books like Eleanor & Park.

Already read this book? Check out our list of books like The Perks of Being a Wallflower!

All the Bright Places by Jennifer Niven

If you liked Eleanor & Park because of its depiction of teenage love while exploring such issues as mental illness, grief, and abuse, then Jennifer Niven’s All the Bright Places is an excellent next read for you.

The story follows Violet, a popular high school cheerleader who is struggling to cope with the recent loss of her sister and Finch, an introverted outsider battling with undiagnosed bipolar disorder. The two meet when they both have decided to end their lives at the same place.

After they talk each other down from the ledge, the two begin to work on a school project together and later develop a romantic relationship. The novel follows their struggles being together as they deal with grief, loss, abuse, and depression while trying to navigate the changing tides of high school.

All the Bright Places has received a lot of critical acclaim since its publication in 2015 and is currently being developed into a feature film to be released in 2019. Because they deal with similar themes, if you’re looking for books like Eleanor & Park, then All the Bright Places is a great choice.

The Beginning of Everything by Robyn Schneider

A great book to read if you’re a fan of Eleanor & Park, Robyn Schneider’s The Beginning of Everything is a wonderful and heart-wrenching teen romance novel.

The book follows Ezra Faulkner, a popular high schooler whose life is turned upside down after he breaks up with his girlfriend and breaks his leg badly in a car accident.

After his promising athletic career is ended by the shattering of his leg, Ezra has to deal with the loss of what was once an identifying factor of himself. As he copes with this tragedy, he begins a relationship with quirky and intelligent Cassidy Thorpe.

Through Cassidy, Ezra makes new friends and discovers a new side to himself. Exploring themes like coming of age, young love, and dealing with loss, The Beginning of Everything is a fantastic choice if you’re looking for a book similar to Eleanor & Park.

The Spectacular Now by Tim Tharpe

The Spectacular Now is a 2008 novel by Tim Tharpe and is a great addition to your reading list if you want to find something like Eleanor & Park.

The novel follows popular party boy Sutter Keely in his final year of high school. Sutter lives for the moment and has no plans for the future, including what he might want to do once high school is over.

That all changes when, on happenstance, he meets Aimee. Aimee is smart, driven, shy and introverted and very much opposite in personality to the Sutter. Despite their differences, the two develop a relationship.

The Spectacular Now is an excellent coming-of-age novel that explores themes like young love, loss and parental relationships among numerous other things and it is a fantastic choice if you’re hanging for a book like Eleanor & Park.

The Sun Is Also a Star by Nicola Yoon

If you are looking for books like Eleanor & Park because you enjoy novels that explore themes of young love and current issues facing teens, then Nicola Yoon’s The Sun Is Also a Star is a great addition to your reading list.

The book follows Natasha, a young woman of Jamaican descent who prides herself on her rational thought and intelligence, and her romance with Daniel. Natasha falls head over heels in love with Daniel and the two develop a whirlwind romance in the backdrop of New York City.

However, Nicola’s family is also close to getting deported from the United States. The novel, which has received many awards and much critical acclaim, does a great job in dealing with teenage love and coming of age while also addressing racial prejudices. It is also being developed into a feature film, due to be released in May of 2019.

So, if you’re looking for books like Eleanor & Park because you like reading about teen relationships as they deal with outside issues, then Nicola Yoon’s The Sun Is Also a Star is a great choice for you.

Published in 2013 directly after Eleanor & Park, Rainbow Rowell’s Fangirl is a great addition to this list.

The novel follows Cath, an introverted and socially anxious young woman who is beginning her first year of university. Cath feels as if she is living in the shadow of her twin sister and deals with a rift in their relationship.

Cath spends a good portion of her time outside of classes writing fan fiction for a fantasy novel. Throughout the novel, Cath becomes increasingly withdrawn and anxious as she also develops a friendship and romantic relationship with Levi.

Fangirl expertly deals with issues of mental illness and other challenges facing young adults today and it is an excellent option if you want to read a book similar to Eleanor & Park.

Sherman Alexie’s The Absolutely True Diary of a Part-Time Indian has garnered a mountain of both critical acclaim and controversy since its publication in 2007. Dealing with themes like poverty, bullying, and coming of age, it is a great option if you’re looking for books like Eleanor & Park.

The novel follows Junior, a 14-year-old boy living on an Indian reservation in Washington state. Junior, though born with some disabilities, has a high level of academic precocity and therefore ends up attending a school in a more wealthy and better-funded district where he is the only person of Native American descent.

While attending that school, Junior must adapt to a different lifestyle. Surrounded by wealthy people, the novel explores such things like academic privilege and the many issues that unfortunately surround Native American communities.

Because of its subject matter, The Absolutely True Diary of a Part-Time Indian has managed to attract a huge amount of controversy and has been on the ALA’s list of most frequently challenged books every year since it’s publication.

The Fault in our Stars by John Green

John Green’s The Fault in our Stars is quite possibly the most popular and famous novel in the young adult romance genre and it is a great choice if you want to find a book like Eleanor & Park.

The novel follows Hazel, a sixteen-year-old girl with terminal cancer as she falls in love with Augustus, another teenager who is a survivor of cancer. The book follows their romance and also explores themes like a coming of age, love, loss, grief and the meaning of life.

To All the Boys I’ve Loved Before by Jenny Han

Jenny Han’s To All the Boys I’ve Loved Before is the first of three excellent teen romance novels and is a great read if you’re looking for books like Eleanor & Park.

The novel follows Lara Jean Covey who, at one point, would write love letters to all of her previous crushes and keep them in a special box. When these letters somehow get sent to all of the people they are about, Lara Jean must deal with the repercussions.

A poignant and honest coming of age tale, To All the Boys I’ve Loved Before has received a mountain of critical acclaim since its 2014 publication and deals with many of the same themes as the books listed previously. It was also turned into a major motion picture and was released on Netflix in 2018.

Already read this book? Check out our list of more books like To All the Boys I’ve Loved Before!

Finding books like Eleanor & Park isn’t a hard task, especially considering how many fantastic and honest novels there are in the genre.

Have you read any good novels like Eleanor & Park? Let us know in the comments! 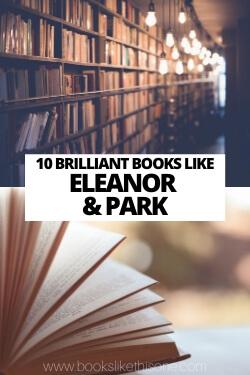