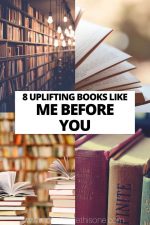 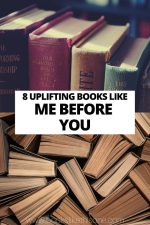 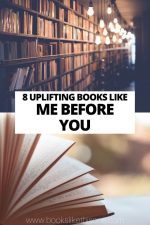 Me Before You by Jo Jo Moyes is one of those delightful books that concentrates the story on the building of a relationship between two people who are not an obvious match. This is the first in a trilogy by the author – After You and Still Me being the other two titles.

Will Traynor is used to living wide: he loves travel, extreme sports and making business deals, but an accident leaves him wheelchair-bound and, understandably, ill-tempered. He wants to end what’s left of his life.

Louisa Clark has a boyfriend and a normal life in a small town but when she takes a job as Will’s carer, she attempts to show him that he can laugh again and he can choose to be happy.

Their story is about an unconventional love and the difficult choices we make about our lives but it also includes some laugh-out-loud situations that bring relief to an otherwise dark and emotional subject.

If you are desperately seeking more books similar to Me Before You, then check out my recommendations below.

The Thorn Birds, by Colleen McCullough

If you’re under thirty, you may never have heard of The Thorn Birds, but if you missed falling in love with Richard Chamberlain back in 1982 when the mini-series of the book was released, then I urge you to read the book.

It is the story of a forbidden romance set in the Australian outback and spans fifty-four years from 1915 to 1969.

Meggie Cleary is the only girl in a family of seven children living on a sheep station in Drogheda. She feels unloved by her mother and seeks affection elsewhere. She’s still very young when she meets the handsome priest, Ralph de Bricassart, and her affection for him grows over time. Their lives take them in different directions over the years but the underlying story is their compelling passion for each other.

This is a powerful saga of love and morality. So if you enjoyed the unconventional romance in Me Before You then grab a hot drink and settle down with The Thorn Birds.

The Italian Villa, by Daniela Sacerdoti

Another charming novel like Me Before You, The Italian Villa simultaneously tells the story of Callie and her new life in Italy alongside Elisa and Leo’s story from a WWII diary.

Small-town Texas waitress, Callie, has just found out she was adopted and her birth mother has left her a hillside villa in Montevino, Italy. She decides to make the journey to see it, which changes her life forever.

Whilst at the villa, Callie discovers a diary written by her birth mother during WWII. Hoping to find the truth about her family within the pages of the dusty old book, she discovers her mother, Elisa, married her childhood sweetheart, Leo, in secret before he left to join the resistance. They vowed to reconnect once the war had ended.

It all seems very romantic until the last pages of the dairy which reveal a devastating betrayal that rocks Callie’s world.

The book follows Elisa and Leo’s heart-wrenching story alongside Callie’s venture into a new world of romance, secrets and loss.

If you want to be transported off to beautiful Northern Italy whilst reading a captivating story of love and hardship, then The Italian Villa is a good choice.

This Love, by Dani Atkins

If you enjoy books like Me Before You where all barriers are broken to allow love in, then I may have your next purchase for you. Winner of RNA award in 2018, This Love is a heart-wrenching tale about learning to let go.

After a tragedy when Sophie Winter was a teenager, she withdraws into her own world, which consists of her one-bedroom flat where she works as a translator. Although she realises she isn’t living her life as she should, she isn’t sure what to do about it.

Sometimes, fate pushes us into making changes we really ought to have made ourselves. In Sophie’s case, her world is shaken when she is trapped in her flat by a serious fire and is rescued by a passer-by named Ben.

This book like Me Before You is an emotional romance with a twist and well worth downloading to your e-reader.

The Notebook, by Nicholas Sparks

Another classic in the romance department is The Notebook. This was adapted to film in 2004 and apparently served as a base for the Indian Bollywood film Zindagi Tere Naam.

This moving story is about a forbidden love being torn apart but eventually finding a way. Hailed as ‘a moving portrait of love itself,’ the story is about Noah Calhoun who is back from WWII and trying to restore his plantation home whilst still dreaming about the girl he met one summer when he was nineteen.

When the girl of his dreams, Allie Nelson, comes back into his life, he doesn’t let the fact that she’s soon to be married to someone else put him off.  Allie confronts him about never bothering to contact her and Noah is shocked as he sent her many letters in the first year after they parted. She finds out that her mother had hidden them from her as she didn’t consider Noah to be a suitable match for someone of her standing.

The whole story is told via a notebook read out to an elderly woman. So if you’re looking for more books like Me Before You then give The Notebook a try.

The First Time I Saw You, by Emma Cooper

Is love at first sight a real thing or do only those of us who live in a dream world possess the belief that it exists?

In this book like Me Before You, Samuel McLaughlin and Sophie Williams meet and instantly feel a connection as though they were meant to be together. But life and its invariable twists conspire to send them in different directions.

Their separate journeys take them through every emotional adjective in the dictionary, involving loss, missed chances and dealing with their past. Will they ever find their way back to each other?

This story is about love – motherly love, sisterly love and the romantic love between Sophie and Sam. When you grab your copy of The First Time I Saw You, hold on to your heart and grab a box of tissues!

My One True North, by Milly Johnson

If you are craving the heart-thudding emotion of books similar to Me Before You, My One True North should at least be somewhere on your wish list. This is the latest novel from Milly Johnson who also wrote The Magnificent Mrs Mayhew.

Laurie and Pete are strangers both grieving for the loss of their partners who died on the same day. They meet in a therapy group and form a bond that grows each week. Whilst sharing in their grief, they realise that their stories are intertwined.

When Pete discovers what really happened, his new relationship with Laurie is threatened. Are they meant to be together?

Sounds like another tearjerker doesn’t it? Well, it is — but there are plenty of funny moments too. This is an uplifting tale about fighting through the sorrow to find your One True North.

Staying on the theme of ‘meant to be,’ when searching for other books like Me Before You, I came across In Five Years and as someone who loves a bit of time travel or mystery with their romance, I couldn’t wait to get a copy.

Dannie Cohan is no flighty chick – she’s a lawyer who knows what she wants and is determined to get it. So far her five-year plan for her future is on schedule: career; check, relationship; check . . .

Until one night she wakes up in someone else’s apartment five years in the future, wearing a wedding ring. When she looks across at the man beside her — he’s not her fiancé. This glitch in reality lasts an hour before she is back in her own bed in the present.

She tries to ignore this very real experience but it is brought back to her when, years later, she meets the man from her vision.

Sometimes the future we think we want isn’t the one we need. If you think fate has a hand in our future then In Five Years should make it onto your bookshelf.

The Bridges of Madison County, by Robert James Waller

This beautifully written story is one of the best selling novels of all time. The film of the book was produced and directed by Clint Eastwood, who also played Robert Kincaid.

The main story of the book is set in Iowa 1965. Francesca is married to a good man and has two wonderful children. Her life is not an unhappy one but she does have her own dreams.

When her family are away visiting the Illinois State Fair, she meets photographer, Robert Kincaid, who is doing a story on the bridges in Madison County. They embark on a short but intense affair that leaves a mark on their hearts forever.

Francesca manages to fill three journals with her thoughts and emotions about the affair and these are discovered by her children after her death leaving them with a difficult decision.

When seeking more poignant novels like Me Before You, don’t let The Bridges of Madison County pass you by; it’s a true classic for the romantics among you.

So there you have it. If you enjoyed Me Before You and already have a box of tissues to hand, then you can’t go wrong with one of the suggestions above for your next sobbing session!

Are you looking for more books like Me Before You? Have any suggestions that didn’t make the list? Let us know in the comments! 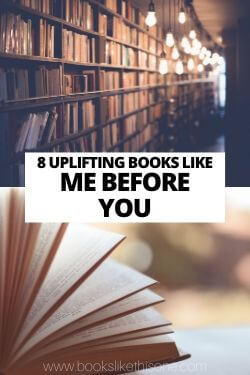