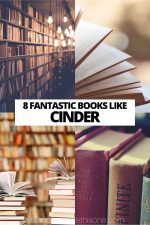 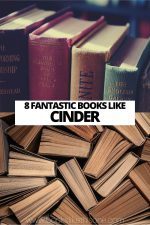 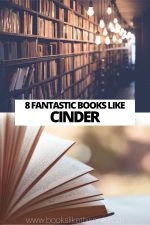 Finding books like Cinder is relatively easy in the age of Google. Perhaps this is because Cinderella has endured as a fairy tale for centuries. In fact, Hollywood is scheduled to release another retelling of Cinderella as I write.

Away from the show business end lies Cinder, the first book in The Lunar Chronicles. Cinder is the story of a cyborg mechanic living in New Beijing, itself in a land under constant threat of deadly plague and the Lunar Empire from the moon above.

Cinder lives with her wicked stepmother who blames her for her stepsister’s illnesses and problems. Of course, things change when Cinder is contracted to repair handsome Prince Kai’s android. You can guess where things go from here, but there is enough difference to keep you reading.

Cinder is a bright mix of Japanese manga, classic fairy tale and old school adventure. If you’ve enjoyed books like Cinder, perhaps you’ll enjoy some of the following titles.

Books like Cinder enjoy mashing up elements of fairy tale and sprinkling in a nice dash of dystopian unease to hook the reader.

In Uglies (which I have previously written about), the story follows Tally, a young girl about to turn 16 meaning she will undergo a plastic surgery-esque operation to turn her into a ‘pretty.’

Everyone looks forward to being a ‘pretty’ as it launches you into the best career and life. Things turn sour when Tally’s friend, Shay decides she doesn’t want to be ‘pretty’ and runs away. Like The Lunar Chronicles, Uglies has attracted a fair share of critique and celebration alike.

Both series ask some interesting questions about what it means to be human as well as challenge societal perceptions of what beauty is. Uglies is worth a read.

Some books like Cinder relish the chance to sprinkle magic, romance and adventure into a reader’s life. Caraval follows Scarlett Dragna as she dreams of seeing Caraval a magical once a year circus-like performance.

Thankfully, her sister Tella is on the case, and with the help of a mysterious sailor, whisks Scarlett away to see the show. Unfortunately, the moment they arrive, Tella is kidnapped by Legend, the mastermind organiser ofthe show.

Whoever finds Tella first, will be declared the winner of this year’s performance, and Scarlett soon becomes embroiled in a show of magic, love and loss. This is a twisty story with a lot of flirty romance blended with magic and trauma.

Some of the plot contrivances are old, but there is enough here to please fans of The Lunar Chronicles.

There are books like Cinder set in the contemporary world but tell a similar story. Fangirl gives us Cath, a teenaged girl who is a massive fan of Simon Snow (basically Harry Potter).

Her sister, Wren, is also a Simon Snow fan, but with the girls about to go to college and Wren telling Cath she doesn’t want to be roommates when they get there, Cath is left feeling alone and nervous.

Can she move on from Simon Snow, or will she become forever obsessed with a fictional character? Cinder and Fangirl are both coming-of-age stories. Fangirl just happens to be set in the contemporary world, but if you love Cinder, you’ll probably enjoy Fangirl.

The Night Circus, by Erin Morgenstein

Some books like The Lunar Chronicles are so well written and observed, you almost forget the romance at the core of the story. The Night Circus came out in 2011 and is still going strong today.

Celia and Marco are two young magicians who have been manipulated by their respective mentors into a competition behind the scenes of the magical Le Cirque des Rêves. Despite being told only one of them can be left standing, Celia and Marco fall in love, putting the whole circus and its performers at risk.

Beautifully written and magically enticing, The Night Circus should be on your reading list if you enjoy books like Cinder.

The Isle of the Lost, by Melissa de la Cruz

Books like Cinder don’t just focus on the tragic aspects of fairy tales. Anyone who loves the humour and magic of ‘happily ever after’, will love The Isle of the Lost.

Twenty years ago, every villain in the world was banished and imprisoned behind a magical force field on an island.  Now the children of Maleficent, Evil Queen, Cruella de Vill and Jafar are on a quest to steal the Dragon’s Eye and escape the island once and for all.

Of course, things are never that easy, and the children soon discover that being evil doesn’t always run in the family.

The Isle of the Lost is written with joy, humour and a love for the source material that inspired its story. If it doesn’t raise a smile on your face, I’m not sure what will.

This might seem like an unusual choice, but there are books like The Lunar Chronicles that hide the romance within the adventure. Zack Lightman dreams of the real world being more like the video games he plays every day, especially his current favourite, Armada.

Therefore, when he spots a flying saucer that looks exactly like the alien ships in Armada, he thinks he’s imagining things. Zack quickly learns that Armada is real and his skills, along with the skills of millions of other gamers are needed now more than ever.

What makes this novel work, is the respect Cline shows towards his target audience. Yes, there are similarities to books like Ender’s Game and a dozen others, but Armada manages to be different enough to enjoy.

Embracing the joy and camaraderie that exists in the video game community, Armada is a thrilling and fun homage to pop culture, the 80s and video games.

Are you an Ernest Cline fan? Check out our list of more books like Ready Player One!

Books like Cinder love to throw politics, class and a healthy dose of rebellion into the story. Red Queen is a mix of the Red Rising series, The Lunar Chronicles, and A Song of Ice and Fire.

Mare is our protagonist, a 17-year-old ‘red’ girl in a society divided by class of colour. Silvers = God-like super-elite. Reds = Commoners.

Mare finds herself going to work in the Silver Palace where she discovers a deadly power of her own to rival the Silvers. Treated as a ‘lost Silver princess’ Mare starts working with a resistance group and, of course, enters into a ‘will-they-won’t-they?’ love triangle.

Whilst there is nothing new about Red Queen, it does have a good pace and enough interesting characters to make it a solid read for a young adult. The X-Men-like powers that Mare and the Silvers are imbued with are fun to read about, and the backstabbing, power games and love tangles add to the drama.

If you enjoyed Cinder, I would recommend this.

Anna and the French Kiss, by Stephanie Perkins

Books like Cinder don’t work unless there is a love story or a romantic element involved. Anna and the French Kiss might be a contemporary romance novel for the YA audience, but it still deals with a young girl coming of age and trying to find her own identity.

This is a romance and it wears its heart firmly on its sleeve. Yes, the plot is tried and tested, but it works for the millions of readers who love books like The Lunar Chronicles. Anna is our protagonist, a young girl shipped off to boarding school in Paris.

Here she meets a French boy called Étienne St. Clair. Will she get together with him or not? I’ll leave you to guess, but a romance novel is rarely about the destination. The journey is all, and in Anna and the French Kiss, it’s a fun (occasionally irritating), but always quite silly journey to enjoy.

Have you read this romance already? Check out our list of books like Anna and the French Kiss!

Books like The Lunar Chronicles delight in blending romance, adventure and fairy tale tropes. If you love reading about women overcoming adversity and are a sucker for a fairy tale romance, there will be something for you in our choices.

Are you looking for more books like Cinder? Have any recommendations that didn’t make the list? Let us know in the comments! 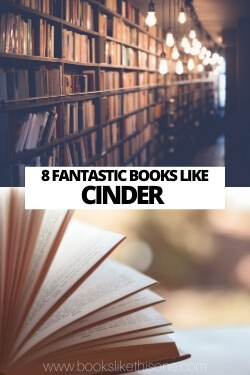