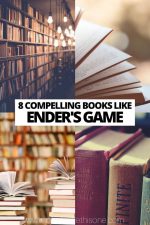 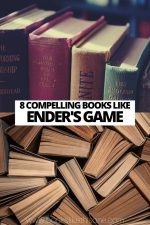 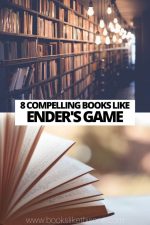 On the hunt for more books like Ender’s Game?

Controversy and outrage have followed Orson Scott Card and his books. Remarks against the LGBTQ+ community along with other controversies still surround the author. Which makes Ender’s Game an even more interesting book.

The novel poses social questions we still ask today. How do we define what a monster is? What is the point of war and should we compromise our own ethics to achieve victory? Ender’s Game is about war and the way humanity handles war.

Set in a future where war has been raging between us and an alien race called ‘Buggers’ for a hundred years, salvation may rest in the hands of young Andrew ‘Ender’ Wiggin. For Ender is a tactical genius whose skills have been honed from years of playing what he thinks, are merely simulated war games.

Ender’s Game and its sequels are entertaining and thought-provoking examples of science fiction. They make us think about the ways and methods we choose to employ in war. If you’ve already read Ender’s Game, and want to read books like it, we have a few suggestions.

The Roar, by Emma Clayton

Books like Ender’s Game enjoy playing with dystopian themes and ethical questions. In The Roar, the whole of humanity now lives behind a high concrete wall, stretching from Canada all the way across the UK and into the east. Built to keep out a plague carried by animals, everything south of the wall is dead or infected.

Mika and Ellie are fraternal twins. When Ellie disappears, Mika is convinced she’s still alive thanks to a telepathic bond the twins share. Planning to escape the wall, Mika goes along with what the government demands of him and the other children, including learning war games on simulators and competing in competitions that could make his family rich.

The Roar is very similar to Ender’s Game in that not everything is quite as it seems. Easy to read and with an end that you may or may not see coming, (opinion remains divided on this) The Roar will keep you reading.

Holding a mirror up to our own world is common in books like Enders Game. Published all the way back in 1959, Starship Troopers is now best known through the 1997 film adaptation that heavily focused on the alleged satire present within the story.

The book follows young Johnny Rico, as he goes through the toughest boot camp in history before winding up in the mobile infantry unit to fight in a war against a ‘hostile’ alien force. Heinlein was a soldier and his love of the military is present throughout Starship Troopers.

When reading, you could easily argue that Heinlein was trying to reflect his own pride in service and the camaraderie it can foster. You could also ponder on the question of whether there is such a thing as a ‘just war’. Either way, this is a highly charged pulse-pounding science fiction action-adventure.

The Giver, by Lois Lowry

Books like Ender’s Game often have a young protagonist who is destined to be a ‘great hero’ only to find out that they are not in possession of all the facts.

In The Giver, Jonas lives in a world free of crime and fear. At age 12, he will be assigned a job like all the other children. He will train for this job and then perform it for the rest of his life. Then Jonas is chosen to be the next ‘Memory Keeper,’ a role that helps keep the status quo, by having one person store all the memories – good and bad – of the past.

Being the ‘Memory Keeper’ means Jonas no longer has access to all the pleasurable aspects of life. The more Jonas learns, the more he realises the society he lives in has been keeping secrets. Easily enjoyed by children and adults alike, there is enough in The Giver to keep readers guessing and debating long after you finish reading.

Ready Player One, by Ernest Cline

So many books like Ender’s Game use the medium of computer games and computer-generated worlds to tell their story. In Ready Player One, Wade Watts lives in a bleak 2044 where the only solace lies within the virtual reality world of ‘the Oasis.’ Governments have collapsed and companies vie for control over the population.

When the dead creator of the Oasis reveals he has hidden 3 ‘easter egg’ secrets within the Oasis, a madcap quest begins all over the world, because whoever finds all 3 secrets first, gains control over the Oasis. Wade sees an opportunity to change his life forever. Unfortunately so does every other player and company in the world.

Before this was made into a film, Ready Player One had already captured the hearts of anyone who’d grown up playing videogames in the 80s and 90s. The world of the Oasis, along with Wade’s motivations and relationships, are more richly explored here than they could be in the film.

Highly enjoyable and with a quest format that anyone who’s ever played a video game can relate to, Ready Player One will have you cheering Wade on.

The Light Brigade, by Kameron Hurley

The Light Brigade is another title similar to Ender’s Game in the way it asks the murky moral questions military generals and governments don’t want people to ask. In Hurley’s world, soldiers are deconstructed into ‘light’ in order to get them to the front lines of a war on Mars as quickly as possible.

Dietz is a new recruit and begins experiencing combat drops that don’t mesh with his platoon’s drops. Is he going mad, or is something else going on? I loved The Stars Are Legion, one of Hurley’s previous sci-fi novels, so was eager to charge right in on this.

The Light Brigade is populated with chillingly believable corporate entities who now control humanity, and Dietz is a wholly likeable and empathetic protagonist to follow. The technology that breaks Dietz and his fellow recruits down into particles of light draws inspiration from the transporter tech seen in Star Trek, but with a far greater range.

The narrative does jump around in time, to highlight Dietz’s problem, making this one time-bendingly fun and thought-provoking story.

Books like Ender’s Game revel in flipping reader expectations. Imagine a world where the elderly are sent to fight on the frontlines of a war? That is the hook for Old Man’s War, a startlingly realistic sci-fi from John Scalzi.

When humanity finally makes it out into space, all the inhabitable planets are scarce or already taken by other alien races. Wars for territory are inevitable. The Colonial Defense Force doesn’t want young recruits though. They have no experience or useful skills. No. Older generations are what’s needed.

Therefore, when John Perry joins the war effort on his 75th birthday, he figures it will be fine. Two years’ service in return for a generous homestead stake. If he survives of course.

Scalzi is a strong writer. Perry’s loneliness and isolation are explored and believably brought to life. His reasons for joining the army are tragically in keeping with the way armies play on people’s desperation in order to recruit.

Old Man’s War is a thoroughly engaging and enjoyable sci-fi up there with the best in the genre.

Talking about books like Ender’s Game is difficult without touching on a dystopic theme. The setting gives Severance a timely prescience: a world destroyed by a plague.

Candace Chen is a millennial office drone in New York City. She barely notices the Shen Fever sweeping the world, until the office starts to empty, families flee and the city becomes eerily quiet. When Candace starts photo blogging the empty streets under the pseudonym ‘NY Ghost’, she runs into a group of survivors led by a megalomaniacal IT guy.

Severance is a realistic indictment of modern office working. The Shen Fever shows us all up to be mindless drones who rarely break from routine as we slowly grind ourselves to death. Everything from the alienation immigrants feel, to the importance of family and friends is explored.

When I finished reading, I called a friend straight away because Severance made me realise that our jobs should not, and never should be, the ultimate goal in life.

Mary Robinette Kowal is a fantastic writer. She is also extremely giving of her time and knowledge, co-hosting Writing Excuses amongst other things.

The Calculating Stars is an alternative history science fiction novella. And it is great! In 1952, a huge meteorite falls to earth, obliterating virtually all of the US east coast, including Washington DC. With earth running out of time before it becomes uninhabitable, a global effort to colonise space is launched.

As a mathematician and former WASP pilot, Elma York is employed by the International Aerospace Coalition as a calculator. Yet, when Elma sees all the experienced women pilots and scientists she begins to wonder why they all can’t go into space.

Elma York featured in Robinette Kowal’s Hugo winning novelette, The Lady Astronaut of Mars. The Calculating Stars is a prequel along with the other two books in this series. York’s management and push against the everyday sexism she experiences at the IAC are not only realistic but relevant to today’s world. Fans of Ender’s Game should enjoy this thrillingly optimistic and poignant book.

War. What makes a monster? Deception. Three themes that resonate strongly in books like Ender’s Game. You can find them sprinkled liberally throughout all the suggestions above.

Some readers dismiss science fiction as ‘nonsensical daydreaming’ unaware that space, technology and aliens are often conduits through which our own ethics and morality are explored and questioned. We may not agree with a particular viewpoint, but we do share an affinity for good storytelling.

Are you looking for more books similar to Ender’s Game? Have any recommendations that didn’t make the list? Let us know in the comments! 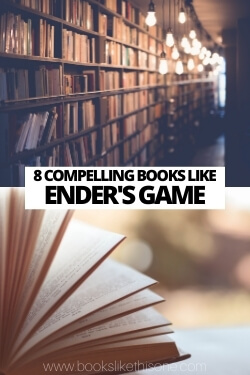