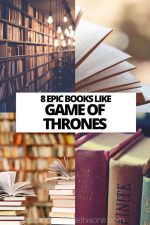 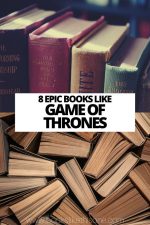 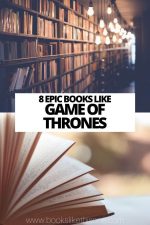 Unless you’ve been living under a rock for the past decade, the Game of Thrones TV series will have caught your attention.

Based on George R. R. Martin’s epic (and still to be completed) A Song of Ice & Fire book series, the TV show has shown sceptical readers just how high brow fantasy can be.

Strong characters, political struggles, internal squabbles and the threat of an everlasting winter draw you into Martin’s rich world. Cersei, Eddard, Catelyn, Tyrion, Jon, Bran, Dany, Littlefinger and more, take you by the hand (or the throat) and don’t let you go.

However, if you’ve already devoured Martin’s epic-so-far, then what other books like A Game of Thrones can be found?

The Court of Broken Knives, by Anna Smith Spark

Books like A Game of Thrones tend to populate their world with richly imagined characters that feel real. Spark’s debut grimdark fantasy is replete with deeply flawed people you can’t help but admire and despise at the same time. ‘Nothing is pointless, as long as one is alive.’ It is hard not to read that and feel darkly optimistic.

The opening chapter is filled with blood and whilst I found it initially hard to grasp, the story just kept sweeping me forward. Marith, Thalia (oh Thalia!), Orham and Tobias are extremely well drawn with distinct personalities. You want to know what happens, even when you hate them for their actions.

One of the many strengths of Spark’s debut is the way she includes gay and bisexual characters as part of the roster without dwelling on it. They’re just part of the world and help make The Court of Broken Knives as real and believable as people in our own world do. If you like A Game of Thrones you would be a fool not to try this.

The Mistborn Trilogy, by Brandon Sanderson

You may know him as the man who finished Robert Jordan’s epic Wheel of Time, but if you’re looking for books like A Game of Thrones, you should definitely read Sanderson’s The Mistborn. I cannot overstate enough how much fun these books are to read.

Sanderson doesn’t rely on old fantasy tropes, instead choosing to throw as many of them out of the window as possible. The magic system on display is fascinating, relying on its users to ingest before ‘burning’ metals that give them their powers. Yet there are only a few ‘Allomancers’ able to burn every metal and they are given the title Mistborn.

The world setting is grim, covered with ash that pours constantly from volcanoes that keep the earth brown and the sky red. As you can imagine the characters populating this world are driven and varied by circumstance. It is difficult to delve into the twisting plot without spoiling the story. Needless to say, The Mistborn is a ‘must read’ for anyone who is a fan of A Game of Thrones.

The Wheel of Time, by Robert Jordan

Speaking of books like A Game of Thrones, it is impossible not to talk about Jordan’s The Wheel of Time series. Choosing not to use his real name of James Oliver Rigney Jr. (perhaps understandable), this 14 volume series was completed by Brandon Sanderson when Jordan died in 2007.

The first book, The Eye of the World, was published back in 1990 and drew on elements from both Asian and European mythology, making every novel a fascinating delve into our own history. Like A Game of Thrones, however, The Wheel of Time novels would be nothing without the rich and diverse characters that populate the world.

Unlike A Game of Thrones though, the characters in Jordan’s universe are more numerous than even Martin could manage. Beginning with Moiraine and her Warder Lan, the books take you on a journey more epic than any seen in thus far in Martin’s universe. A Game of Thrones is not inferior by any means, just different in scope.

Like Game of Thrones though, you will soon be able to watch Jordan’s characters and world on screen as Amazon Prime have ordered a TV series with Sony Pictures producing.

Published in 2019, Black Leopard, Red Wolf is a similar title to A Game of Thrones in that it really makes you feel like you’re in a world similar, yet different to Westeros. The first in a planned trilogy, it follows a man called Tracker. He is known far and wide for his skills as a hunter, able to find anyone or anything.

Hired to track down a boy who disappeared from the North Kingdom over three years ago, Tracker soon finds himself having to break his rule of ‘always work alone’ when he comes across other people looking for the boy.

James’ novel has been favourably compared with Martin’s but is seeped in African history and mysticism giving the story a more inclusive vibe. I really enjoyed reading this and am eagerly anticipating the next book in the series before the inevitable film adaptation appears… which won’t be that far distant as Michael B. Jordan has already optioned the rights.

Turning the story of the humble origins on its head comes this series of books like A Game of Thrones by Mark Lawrence. Instead of growing up in some backwater stable, our protagonist, Jorg Ancrath, was once a royal prince accustomed to privilege.

Now known as the Prince of Thorns (also the title of the first book) he leads a dark band of outlaws committing raids and atrocities across the land. Jorg thinks he’s seen it all and is not sacred by anything alive or dead, except perhaps his own past. And when he is forced to return to his father’s castle, those childhood horrors return to haunt him.

It is hard to express how I feel about The Broken Empire series without becoming a gushing fantasy nerd. These are tightly written, well-constructed novels filled with diverse characters both bleak and funny, sometimes at the same time. Well worth a read.

If you’re wondering why a historical novel is sitting on this list, the answer is simple. Fantasy books are often accused of not having any bearing on real-life events. One read of Wolf Hall, Bringing up the Bodies and The Mirror and the Light, will assuage you of any doubt that fantasy and real-life are intertwined.

Plots, politics, betrayals, death and intrigue populate this novel. Mantel’s tale of Thomas Cromwell’s rise to power under Henry the 8th before his eventual fall from grace and death, is as epic and fantastical as books like A Song of Ice and Fire. Told mostly from Cromwell’s perspective in language that is indicative of the English at the time, we begin from Cromwell’s humble origins.

We then journey via flashbacks and forwards all the way through to his position as a close advisor to the king. Stories of his childhood at the hands of an abusive father tie in with his reactions to later events. The scale and imagination on display is truly impressive.

Whilst the language and style did make it hard for me to get into, once I was into the story it was hard not to admire the details. If you’ve ever imagined what life was like in Tudor England under Henry the 8th then you should pick up Wolf Hall.

Books like A Game of Thrones are filled with imagination, magic and more. Stephen King is one of the most prolific writers the world has ever seen, but he is often known more for his horror stories. The casual reader forgets that he also writes and has written fantasy as well as contemporary stories.

The Dark Tower series began in 1982 with the publication of The Gunslinger. It has one of the most memorable yet simple opening lines of any book. “The man in black fled across the desert, and the gunslinger followed.” That alone got me reading on. I wanted to know more about the man in black and who the gunslinger was.

Why was he chasing the man? Where are they? So many questions erupted in my mind from that simple opening line, demonstrating the powerful hook books can have on the imagination. The Dark Tower series takes place in other worlds similar yet different to ours, replete with characters you come to know, love and hate. Roland himself is the anchor that keeps this story flowing as he endeavours to solve the mystery of the Dark Tower itself.

The Written, by Ben Galley

Books like A Game of Thrones come from the imaginations of all shapes and sizes. Galley is an author you can’t help but admire. From selling pasties on the platforms of train stations to epic fantasy, his own tale is almost as epic as his novels. The Written came out in 2010 and received strong reviews.

When a powerful book of spells is stolen and the scholars studying it slaughtered, a lone mage is sent to return a precious treasure to Dragons to gain their help in finding the culprits and preventing a war. Already you can sense the high stakes and promise this novel holds. Galley holds a lot of love for Anne McCaffrey’s Dragonriders of Pern series and it shows.

The world-building is dense and filled with a love and respect for the fantasy genre as a whole. Galley has since written more (arguably better) novels, but if you’re looking for a solid entry into the fantasy genre, The Written will take you there, gleefully plastering a smile on your face.

Books like A Game of Thrones come drenched in intrigue, blood, politics, death, love and usually more death. It is hard to elevate one above the pack. The suggestions above are just some of our thoughts, but rest assured, there are plenty of dragons flying out there, just waiting to be found.

Are you looking for more books like A Song of Ice and Fire? Have any suggestions that didn’t make the list? Let us know in the comments! 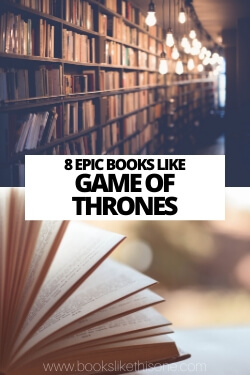