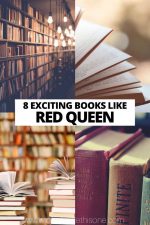 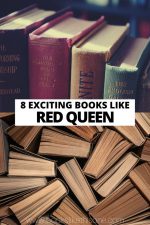 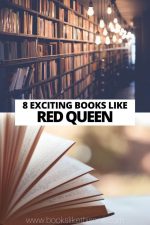 There are many books like Red Queen for those with the hunger to read them. The setup of Mare, a young teen ‘Red’ living in a society divided by blood caste is an old fantasy trope. However, Red Queen is a good read.

Themes of rebellion against an unfair world resonate throughout and the reader is easily drawn into Mare’s world. However, if you have already devoured Aveyard’s series, then the following suggestions will help sate your appetite.

When searching for books like Red Queen, you will invariably come across this Three Dark Crowns. On the island of Fennbim, a set of triplets is born in every generation, one of whom is destined to be overall queen. The catch? They have to fight for the right to rule and it isn’t a simple punch up. The sisters fight to the death.

This novel is a mix of The Hunger Games, Red Queen and Northern Lights. The narrative often hones in on Mirabella; the strongest of the three sisters. She is perhaps the most interesting as she doesn’t want to kill her sisters in order to be queen.

Romance, death, intrigue and affairs follow leading the reader through a fun and exciting ride through this fantastically familiar world of class-based rule.

City of Brass, by S. A. Chakraborty

Published back in 2017, City of Brass is another book like Red Queen that fans of Aveyard can sink their teeth into. Similar also to The Golem and the Jinni, this highly imaginative novel whisks us into an alternative version of the middle east circa the 1800s.

Nahri is a talented con artist using palm readings and trickery to swindle Ottoman lords and other noblemen. The plot heats up (literally!) when during an exorcism, Nahri summons a djinn warrior named Dara.

From here, the two embark on a magical journey filled with monsters, spirits becoming close with her newfound friend as they examine the inequity in society and beyond. In a way, this novel is more relatable to our own world and it’s class-based systems then Red Queen, yet both retain that sense of wonder every reader of fantasy always looks for.

Finding books like Red Queen is relatively easy. Finding one like Binti is an indescribable joy to any reader. I find it hard to describe the feeling that comes when I chance upon a book so solidly written that is both alien and familiar at the same time.

Protagonist Binti is of Himba origin, one of 2 ethnic groups mentioned in the book and we meet her as she is navigating her way through a conservative culture, abandoning her family’s business to attend a prestigious alien university.

She goes through all the things you come to expect from a story like this – sneaking out of her family home, running away on the ship due to carry her to Oomza Uni, making friends with fellow students, even almost becoming interested in a boy. And then BAM! The Meduse arrive with a startling brutality forcing Binti to learn more about these aliens and why they hate humanity so much.

Personally speaking, it is a delight to read science fiction from another ethnic perspective. It forces me to question my own views on the world and increase my empathy for people from different backgrounds. Binti and the Meduse could well be representatives from two culturally opposite countries of our own world, at first unfamiliar and terrifying to each other until they learn more about the other.

Technically Binti is a novella, but sometimes the best things come in small packages. Well worth a read if you’re looking for books like Red Queen.

If you love books like Red Queen you’ll be bowled over by Angelfall. The first in a trilogy told from the perspective of a 17-year-old (these 17-year-old heroes are everywhere, aren’t they?) Penryn Young.

Penryn lives in the San Francisco Bay Area. Unfortunately for her and everyone else, the city has been attacked by angels along with the rest of the world. The story picks up 6 weeks after the apocalypse when street gangs rule the city and everyone is terrified to go outside.

The action heats up when Penryn makes a deal with Raffe, a warrior angel she finds battered and wingless on the streets. They begin to wander a desolate California looking to rescue Penryn’s captive sister being held in the angel’s stronghold.

This book is really a twisted dark buddy comedy/drama/romance. Both Penryn and Raffe have likeable and unlikeable traits giving the reader a three-dimensional grasp on the characters throughout. A nice ‘quest’ structure permeates the narrative with the reader always wondering if Penryn will rescue her sister, and whether or not Raffe will regain his wings.

Dark fairy tales are nothing new and you can find many books like Red Queen that are inspired by classic stories. The Shadow Queen works simply because the main characters of Lorelai, Irina and Kol are believable.

Lorelai is loosely based on Snow White, but I do say ‘loosely’ because the princess here is tough, resourceful and doesn’t suffer fools gladly. Kol offers us a tortured view of a man desperately trying to save his kingdom by making a deal with the wicked queen Irina that he comes to regret.

How can anyone promise to kill someone they grow to like and later love in order to save lives? As for Irina, desperation and fear guide much of her existence and you do begin to feel sorry for anyone living like that.

Snow White feels like it’s been done to death by Hollywood in recent years, but reading The Shadow Queen feels like taking a step back into an old black and white movie, only to discover more colour and depth.

Any book that begins with a female protagonist wearily reminding you that she has been able to kill a man with her bare hands since she was 18, is guaranteed to grab the attention. Graceling is similar to Red Queen in that Katsa and Mare both share an extreme skill that neither are expected by society to possess.

Unlike Mare, Katsa comes from a privileged background being the niece of the king. Like Mare though, she is forced into doing things she really doesn’t want to do – like killing.

Whilst the romance with Prince Po falls a little flat for my taste (why does a hero have to fall in love with anyone in order to succeed?), the story is good enough to hold interest for any fantasy reader. Throw in a secret capable of destroying the world and Graceling delivers the expected epic readers come to expect in this genre.

Published in 2017, Jade City has been popping up on many comparison lists for books like Red Queen. It is easy to see why when you begin reading.

Set in a sort of weird hybrid world that feels like 1950s Hong Kong (but the city is called Janloon), the story follows the city clans as they battle and fight honourably for the possession of Jade, a precious stone that enhances one of six warrior disciplines: strength, steel, perception, lightness, deflection and channelling.

I felt like I was reading a live-action role-playing novel at times, but the characters and plot really do come into their own. We zip between clans and other residents of the city beginning with Bero, a thief who tries to steal Jade from a powerful clan member dining in a clan-affiliated restaurant.

The story revs up when he is caught and brought to Hilo (another strong character) for punishment. Family feuds, plots, class-based disputes all wound up in notions of honour… Jade City has it all and is well worth a read. The first in a series and one that at times felt like I was reading about pirates mixed with Klingons from Star Trek. Cool in my book.

Any novel set in a kingdom where assassination is not only common but legal will grab any fantasy reader’s attention. Another 17-year-old is the lead protagonist in this sharply told tale.

In Assassin’s Heart, Lea trusts her family’s position of power and strength and walks about secure in the knowledge that her life will proceed on a set course. So when she wakes up to find her family murdered and her home on fire, she soon realises that her life is never going to be simple.

Throw in her relationship with the son of her family’s biggest rival and enemy, and you have a novel that will pull you along like a high-speed train. A good story, interesting world and fun characters. Put it on your list if you’re after books like Red Queen.

There are many similar titles to Red Queen available. The ones mentioned are just some of the thousands available to read. What do you think of our choices?

Are you looking for more books like Red Queen? Have any recommendations that didn’t make the list? Let us know in the comments! 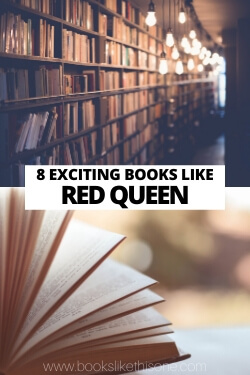