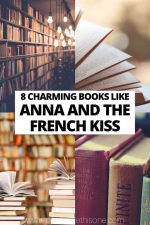 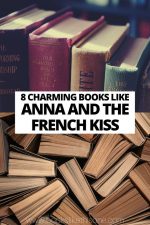 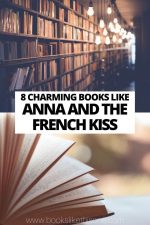 Anna and the French Kiss is a successful debut novel by Stephanie Perkins about finding love in Paris. It begins when Anna is made to leave her life in Atlanta to go to a boarding school in Paris. There, she becomes friends with the charming and swoon-worthy Etienne St Clair. Sometimes, the strongest love can start with friendship and in this story, they have no choice as Etienne has a girlfriend. The setting is described with wonderful prose by the author, which adds to the intensity and splendour of their unfolding love story. You’ll be checking out flights to Paris before the end! There are two other books in the series: Lola and the Boy Next Door and Isla and the Happily Ever After. If you are looking for books like Anna and the French Kiss then I have a selection for you to check out.

The Chocolate Kiss, by Laura Florand

If, after reading Anna and the French Kiss, the part you’re missing most is Paris, then look no further than The Chocolate Kiss. Florand’s chocolate prose will have you running to that treat drawer in the cupboard – the one you think nobody knows about!

This novel has everything we all love: chocolate, romance and a beautiful setting. Although the romance is not all sweet and sugary, Florand has included some sensual, steamier scenes – we are in Paris after all!

The story follows Cade Corey, heir to a chocolate dynasty, and her dream to expand. She tries to engage the help of Sylvain Marquis, a chocolate artisan, but he doesn’t share her vision or views. Their relationship has a tumultuous start but builds into something more.

So, if you’re looking for books similar to Anna and the French Kiss then take another trip to Paris and give The Chocolate Kiss a try.

Again But Better, by Christine Riccio

This LA-based author became famous for her YouTube videos about all things books. She pronounces herself a ‘book guru’ and her aim in life is to get more people reading. Her debut novel Again But Better was a New York Times bestseller.

The story is about a young woman called Shane, whose school and home life on the surface appears perfect, but she has no real friends to speak of and romance is something she’s only read about.

If you liked Anna and the French Kiss and are looking for a similar story, then follow our main character as she travels to London for a semester in the hope of finding love, adventure and maybe herself – although as with all things, nothing works out quite as we imagine it.

This is a charming story with some laugh-out-loud moments and an added touch of magic.

My Life Next Door, by Huntley Fitzpatrick

If you are looking for more books like Anna and the French Kiss then My Life Next Door could be a good read to get your flutter fix!

Nominated for a Young Adult Fiction award, this book is a series about Stony Bay – a place not a person, although it would make a cool name for a main character.

In this fictional town in Connecticut, teenager, Samantha Reed, strikes up a secret friendship with a boy who lives next door. Jase Garrett is one of eight children and a source of escape for Samantha who often watches his family from her balcony to get away from her own rigid life and exacting mother.

An accident concerning Samantha’s mother and campaign manager is initially covered up but with the repercussions mounting, someone is going to have to come clean.

Through all the drama we follow the relationships in Samantha’s life and her growing affection for Jase.

Waiting For You, by Susane Colasanti

Novels like Anna and the French Kiss should be easy to read and relatable to the trials of youth. Waiting for You explores the awkwardness of a first crush; family drama; your relationship with your BFF, the nerdy boy next door who you used to be friends with; and a mystery man.

Marisa and her best friend, Sterling, are determined to find love at the beginning of the new school year and finally, when Marisa’s crush, Derek, notices her she is over the moon. But it’s not all rainbows and unicorns. In the midst of the story, she has to deal with friction with Sterling, reconnecting with her geeky neighbour who is surprisingly cool and at the same time trying to figure out who the underground DJ is who seems to know how she thinks.

Who will Marisa end up with?

If you love the gripping “will they won’t they” aspect of books like Anna and the French Kiss, then you may want to put Waiting For You on your wish list.

Kasie West likes things to go wrong in her novels about young romance and is happy to include modern-day technology to aid or hinder the plot when necessary but in this novel like Anna and the French Kiss, the road to love takes an old-school route.

Lily falls for a fellow music fan when she scribes song lyrics onto her desk and returns to discover someone has written the next line. The story unfolds as Lily and her mystery man begin writing letters to each other. This is a lovely, fluffy romance where the two main characters get to know each other through the written word.

The story in PS I Like You proves that the age of the letter is indeed still alive and well and working its magic on young love.

If there was ever a book I wish I’d written (apart from the Harry Potter series) it would be this one. It was first published in 2015 and was adapted to film in 2016.

Our main character in the story is Maddy Whittier who has SCID (Severe combined immunodeficiency). She cannot leave the house because if she does, she could die. Her tiny universe consists of her mother, her nurse and her beloved books.

But her world is about to be shaken when Olly moves in next door. They begin a touching journey of discovery and Maddy realises she wants more than her tiny bubble world.

This book has an unexpected ending that will stay with you long after you have closed the last page.

So, if you liked Anna and the French Kiss, and don’t mind a little emotional upheaval with your romance then Everything, Everything will not disappoint.

If you’re missing that excitement of first love in books like Anna and the French Kiss and you enjoy an angst-ridden love interest, then Crash could be one to pop into your weekend bag.

Lucy Larsen has a dream and a passion: ballet. Becoming a ballerina is her dream, her goal and all she thinks about until she meets Jude Ryder – he’s a dark guy with a dark past and a murky future. They are definitely not a match made in heaven, but over the course of the book, true natures are revealed and a symbiotic relationship emerges – they bring out the best in one another – which is how many lasting loves begin.

We all adore a story where the bad boy exposes his softer side and if you enjoy stories similar to Anna and the French Kiss then this is worth a read.

The Statistical Probability of Love at First Sight, by Jennifer E Smith

You’ve heard of the 4-minute warning – well, The Statistical Probability of Love at First Sight asks if that’s enough time to fall in love.

Hadley is on her way to catch a plane to London. Her father is about to marry someone she has never met and unfortunately, she is to be their bridesmaid. Then disaster happens, she misses her flight by 4 minutes.

Sometimes, the universe has a reason for messing with our well-laid plans and luckily for Hadley, it means she gets to meet Oliver.

This is a witty tale of love and heartbreak – all in 24 hours.

As a slightly shorter-than-normal novel, this book like Anna and the French Kiss is one of those books you can read while sitting by the pool on a sunny day and read all the way to the end.

There’s nothing quite as attractive as something or someone you can’t have. In this list of books similar to Anna and the French Kiss, I hope you will find not only forbidden love but romance, heartbreak and humour too.

Are you looking for more books like Anna and the French Kiss? Have any recommendations that didn’t make the list? Let us know in the comments! 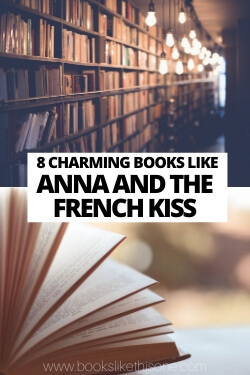